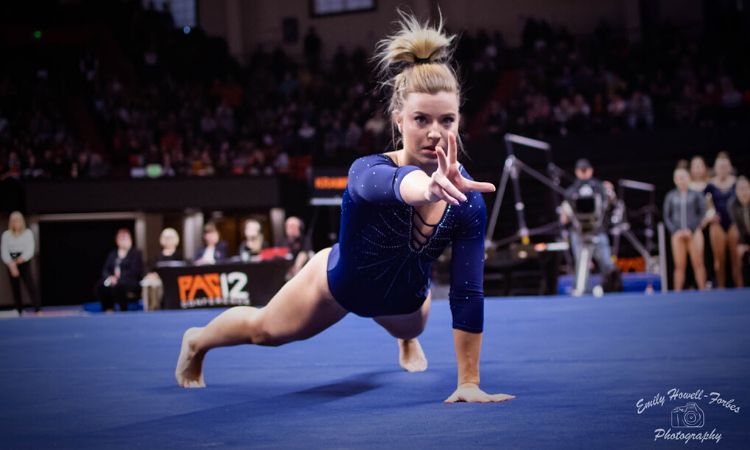 Why You Should Cancel Plans For It: This has the potential to be a very high scoring meet: It’s senior night in Oklahoma, and you know they are not going to send Maggie Nichols off without at least one ten if they can help it. The Sooners put all worry about Nichols’ ankle injury to rest last week when she competed in (and won) the all around, and the team recorded its highest score of the season to boot. Michigan has been on fire the past few weeks, breaking its program score record and nearly matching it the very next week. If the Wolverines perform how they have been recently, a 198 is not at all out of the question.

What We’re Watching: There are so many individual routines to watch for at this meet it’s hard to narrow it down. Natalie Wojcik’s Deltchev on bars is one of the most beautiful releases currently being performed in the NCAA. Gabby Wilson has a jaw-dropping open full-in on floor that can’t be missed. Olivia Trautman received her first perfect ten of the season last week on vault, where the Sooners remain unstoppable.

What Else You Should Know Before Tuning In: Michigan has the potential to move up into the top four ranked teams overall if this meet goes well, which would be extremely exciting for Big Ten fans everywhere.

When You Need to Tell Your Friends You’re Busy: Friday, March 6 at 9:00 p.m. ET on Mountain West Network

Why You Should Cancel Plans For It: Both of these teams are having strong seasons. BYU has emerged as a frontrunner for the MRGC title, and the Cougars haven’t even had Shannon Evans at full strength. Utah State is exceeding expectations this season. BYU is the favorite, but don’t sleep on the Aggies. If BYU in any way falters, Utah State will be right there, waiting to capitalize on mistakes. Beam will be especially interesting, as BYU is currently No. 18 in the country and Utah State is No. 20. Sofi Sullivan and Autumn DeHarde lead the way for the Aggies, while Elease Rollins has recently stepped into BYU’s lineups and is performing very well.

What We’re Watching: BYU floor is can’t-miss in general, but especially watch for Abbey Miner. Her younger sister Sadie has come into her own this season; watch for her on vault, beam and floor. Sofi Sullivan quickly emerged as a star for Utah State. She excels on beam, but don’t sleep on her in the all around either. Autumn DeHarde is also consistently great on beam and floor.

What Else You Should Know Before Tuning In: BYU rested Shannon Evans the past two meets as she deals with Achilles soreness. She only competed bars and beam two weeks ago and only competed bars last week. It’s also Utah State’s senior night, which could make it all the more interesting.

Why You Should Cancel Plans For It: This is the final all-Pac-12 dual meet of the season and it should be an interesting one. While the Bruins enter as the favorite, UCLA has faltered twice at home this season while California has competed well on the road. This meet will give us a good look at which of these teams has a better shot at winning the conference championship meet at the end of the month.

What We’re Watching: Lineups will be interesting to watch at this meet as both teams had some major changes last week. UCLA rested Kyla Ross on floor and tested lineup depth on the other events as well. The Bruins were without Margzetta Frazier for the third straight weekend. California’s Kyana George was out with injury last weekend despite reports that she would be competing, so watch to see if she returns to any of her lineup spots after Nina Schank competed well in her first all around performance of the year last week.

What Else You Should Know Before Tuning In: Although it is the final Pac-12 conference dual meet of the season, the regular season champion has already been decided with Utah claiming the title.

Why You Should See the Error of Your Ways: It’s an SEC matchup and a MIC matchup all rolled into one. This will be the second meet in a row where LSU and Arkansas have faced each other. Last time out, LSU finished over a point ahead after Arkansas had to count a fall on bars, but it has the potential to be a much closer fight. Arkansas will be looking to score well here and get back into the top 16. Texas Woman’s loves to arrange meets against much higher-ranked teams, but they aren’t always the high-scoring free-for-all that the Division II Pioneers would hope for. That said, this is a team that can score in the mid-195 range on a good day. Centenary’s four highest scores this year have been at home, so the target for the Ladies will be to break 190 on the road for the first time this year.

Need More Proof? LSU standout freshman Kiya Johnson is one to watch. She is currently ranked fourth in the all around and had already received a ten on both vault and beam. Arkansas’ floor lineup is currently ranked No. 11 in the country, so that will be a can’t miss rotation. Centenary beam might be your new obsession after this meet–Kendall Knaps does a beautiful gainer layout dismount off the end of the beam, and Dorothy Mims’ routine is a beauty. And competing against two Division I teams whose bars lineups have had some hiccups this year, Texas Woman’s senior Bria Northrop could rank very high on that event.

Why You Should See the Error of Your Ways: These are both teams on the outside of the cream of the crop looking in, but which have big potential. They’re both potential regionals spoilers, capable of knocking down higher-ranked opponents with hits. The Tigers are fresh off of a close one with LSU and an upset over Minnesota, and will be looking to keep the momentum rolling.

Need More Proof? Taylor Houchin’s vault remains one of the most stunning and technically sound in the NCAA. Keep your eye on Helen Hu on beam as well. The all around battle in this one should be exciting; any one of Morgan Porter, Adnerys de Jesus or Houchin could take the win.

Why You Should Clear Space on Your DVR: Penn State is coming off a season high and will be looking to continue that momentum against a top ranked opponent. Another high score should assure the Nittany Lions a top 28 finish, which would allow them to avoid a play-in meet at regionals. For Florida, its ranking is pretty much set, but it could set a new program record NQS with a 197.900 here.

What to Look for If you Missed It: Florida’s entire beam rotation is a can’t-miss. The Gators are ranked No. 1 in the country on that event and have scored at least 49.500 every meet for the last six weeks, which is an NCAA record. For Penn State, all arounders Lauren Bridgens and Cassidy Rushlow have been top contributors.

Why You Should Clear Space on Your DVR: Minnesota has fallen victim to the mid-season slump and will be looking to get back to its earlier form at this non-conference match-up. Uncharacteristic mistakes have plagued the Gophers’ otherwise solid beam lineup recently—along with slightly underwhelming bar rotations—but if they can clean up those two events they will be back on track for a solid score. N.C. State is capable of capitalizing on a low-to-mid 196 score from Minnesota, but will need a strong showing to do so.

What to Look for If you Missed It: Tiarre Sales has proven to be quite an asset on all four events for Minnesota, joining fellow teammates Lexy Ramler and Ona Loper in the all around competition in the last few meets. Watch for N.C. State freshman Chloe Negrete on beam and floor, and keep an eye out for Drew Grantham: The senior has been notably absent on vault and beam lately but is usually a solid all arounder for the Wolfpack.

Why You Should Clear Space on Your DVR: This iconic rivalry meet should be a close one. Alabama has been having a fantastic season—with especially notable performances from a couple of its freshman—and is more than capable of pulling off a victory here, especially with having the home team advantage. Georgia has been struggling a bit this season with injuries and inconsistency, but it has rallied time and time again, breaking the into 197 territory three times over the last five meets. If both teams have hit meets the win will likely go to Crimson Tide, but either team is capable of capitalizing on mistakes from the other side.

What to Look for If you Missed It: Alabama freshmen Makarri Doggette and Luisa Blanco have been on fire this season: Do not miss either gymnast on beam or floor especially. Georgia senior Sabrina Vega has the best floor-routine-that-should-go-viral-but-hasn’t of 2020, so make sure to watch if you’ve somehow managed to miss it so far.

READ THIS NEXT: The Dismount: Week 9