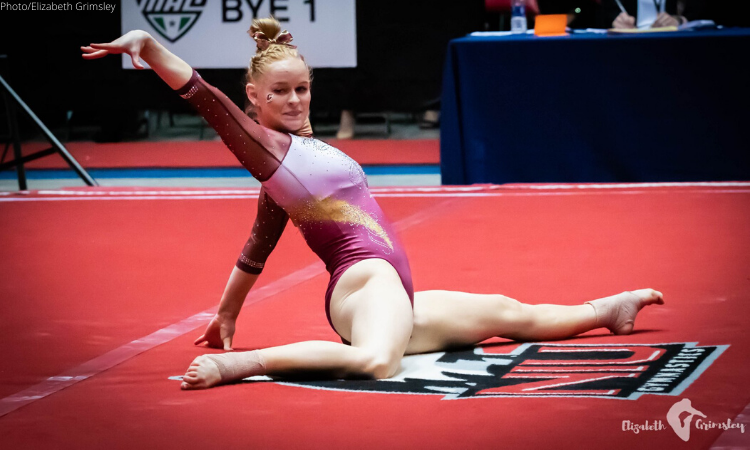 Bold names indicate the gymnasts who would qualify if the regular season were to end today.

You’ll see some familiar names at the top of this chart, with some regionals mainstays doing what they need to do to compete individually in the postseason once again. Those gymnasts, like Central Michigan’s Denelle Pedrick and Bowling Green’s Jovannah East, are joined this year by strong four-eventers Hannah Joyner (Rutgers), SEMO’s Anna Kaziska and Illinois State’s Angelica Labat. Joyner in particular is an exciting prospect. The freshman has a huge NQS of 9.9100 (!) on beam and puts together strong sets on the other three events. Kaziska is another intriguing potential qualifier, seeing as SEMO is coming off a pretty low year in 2019. The Redhawks sophomore has a handful of high 38s she can improve upon and five opportunities to do so to increase her chances of qualifying to regionals in 2020. The potential is there.

A handful of well-known gymnasts from cult-favorite programs don’t have enough scores yet to have an NQS, including Illinois State’s Gabrielle Cooke, Boise State’s Hope Masiado, Arizona State’s Gracie Reeves, Kent State’s Karlie Franz and Central Michigan’s Hannah DeMers. DeMers in particular is someone to keep an eye on. She was out of the all around for a couple meets and just needs two more four-event performances for an NQS but ideally three more 39-plus totals in five tries to be in contention. Deja Chambliss only recently started competing all around this season; with a 39.275 and a 39.15 so far, she’ll be one to watch if she continues to compete all around in at least four of GW’s remaining five meets.

Kent State’s Rachel Decavitch really hangs in the balance. She has three low scores to drop and four meets to do it. But when she’s on, she’s been stellar for the Golden Flashes and is more than capable of making a late push. Gabby Landess is out of the picture now, but with three low scores to drop, she could move onto the radar with hits in the next few weeks. We’d also like to bring up the idea of Darian Burns. The Falcons senior is the reigning USAG national all around champion and has a huge ceiling despite being somewhat inconsistent. While she only has one 39-plus total as of now, that mark is a huge 39.375 and she still has four more opportunities to really step it up and make a push.

There are some stellar vaulters in this group, and the field is competitive. A handful of the lower-ranked members of the list have the potential to shoot up with one more solid number. Jovannah East is a great example: Her 9.750 to drop is her only sub-9.800 score currently counting. A 9.900 at her next away meet boosts her to a 9.8500 NQS. Likewise Gayla Griswold, who moves up to a 9.8200 NQS if she matches her season-best 9.825 at Lindenwood’s away contest this weekend. Daisy Woodring stands to jump to a 9.8350 with a season high-matching 9.850 this weekend.

There are a few gymnasts who haven’t competed vault enough to have an NQS yet but should be on our radar. Hannah DeMers missed a few weeks, as mentioned above, and is one home vault total short of being ranked. Her floor, if she matches her season-low 9.800 this weekend, is debuting with a 9.8250 NQS; she could go as high as 9.8450 if she matches her season best 9.900. Cairo Leonard-Baker is another name to watch. Assuming she vaults in Monday’s road meet, she will have an NQS. A season low-matching score would land her a 9.8000 NQS; if she matches her season-high 9.900, she’ll debut at 9.8250.

While those are the big names we’re eyeing, there are always some outside hopefuls who can sneak into a qualifying spot with a strong back half of the season. We’re tracking those gymnasts, too.

On bars, we already have eight gymnasts at or above the cut-off NQS from last year. Emily Muhlenhaupt is leaps and bounds ahead of the rest of the field and is guaranteed to qualify to regionals, assuming Boise State finds itself outside of the top 28, but beyond that it is quite a race for regionals spots. Nilson, Iribarren and Burton should feel safe at 9.845, but beyond that the gymnasts should be aiming to replace their lowest counting scores as soon as possible.

Tiara Wright is in a great position to drop a string of 9.825s with a total of six meets remaining, including four on the road. Cortney Bezold also has four away meets left to drop a pair of 9.800s that are holding her back from a higher ranking. Meanwhile, Nevin Adamski, currently outside of our projected qualifiers due to losing a tiebreaker, only has three road meets remaining to drop two 9.750 scores that are currently counting toward her NQS.

Several gymnasts can potentially join this group if they are able to drop low scores currently being counted toward their NQS. Olivia Aepli is counting a 9.125 road score to go along with four other 9.875-plus marks—if she has a clean routine at Missouri this weekend, she will move near the top of this list. Juliette Boyer is a beautiful bar worker but is currently counting road scores of 9.550 and 9.175. With four away meets in March, she’ll have plenty of opportunities to move up these rankings.

Cairo Leonard-Baker has four scores of at least 9.875 on bars so far, but she has not yet competed in enough road meets to have an NQS. She’ll be a favorite to join this list after this coming weekend when Arizona State competes at Stanford. Another without an NQS yet is Mei Li Costa—with a 9.800 this weekend she’ll enter the field with a 9.8150 NQS and plenty of opportunity to grow over the last month of the season.

We’re predicting the field for this event to be slightly less competitive than last year with less individuals with strong qualifying scores in contention as of now. There is a strong group at the top of gymnasts whose teams are seeing marked improvements in 2020, including Utah State’s Autumn DeHarde and Sofi Sullivan and SEMO’s Anna Kaziska, as well as CMU’s Morgan Tong, New Hampshire’s Alyssa Worthington and Pittsburgh’s Michaela Burton. All of these gymnasts are already in a good position to compete as individuals should their teams finish outside the top 28.

In the second tier, a number of gymnasts are in good shape to drop single scores holding them back. Eastern Michigan’s Caitlin Satler is still holding onto a 9.200. If she scores 9.8000 in her upcoming contest, her NQS will jump to 9.8350, and if she matches her season high of 9.900, her qualifying score will move all the way to 9.8550, putting her in solid contention to compete at regionals. Bowling Green’s Taylor Worthington is in a similar situation. While she sits with a rather low 9.6500 NQS currently, that number still includes both a 9.150 and a road 9.650. If she can get rid of those two sub-par scores by replacing them with 9.800s, her NQS will jump to 9.8200.

There are a number of strong beamers who do not yet have an NQS yet, including Southern Connecticut’s Bianca Leon, who joined the team in January but has since hit a high of 9.900. Her other scores aren’t stellar, but she has a number of other opportunities to toss out the bad and bring her qualifying score up to regional contention standards. George Washington’s Hannah Cohen has four 9.825-plus scores in her calculation and just needs one more for an NQS. If she hits her season low of 9.775 this weekend, she’ll enter the ranks with a solid 9.8200. Others with too few scores that will be looking to start NQS strong are Kent State’s Riley Danielson and Penn’s McCaleigh Marr.

Those aren’t the only contenders. The following gymnasts have an outside shot at making regionals, either with good hits in their remaining meets or a lower overall qualification cutoff score in 2020. Keep your eye on those with more than a couple away scores left on the calendar, as they will have more opportunities to toss bad numbers and jump in the standings.

Take a deep breath as you scan down this list: The numbers top floor gymnasts are producing this year are truly astounding. Eight gymnasts from teams outside of the top 28 have already met last year’s qualifying cutoff, so expect the battle on this event to be immense.

Ohio State’s Claire Gagliardi has emerged as a force on her only event and debuts with a NQS only a hair short of 9.9000. Right behind her are senior powerhouses Taylor Chan, Maya Reimers and Khazia Hislop. These four all do floor routines that are unusually difficult, stylish and—critically in a close qualifying race—devastatingly consistent. They’re the only ones we feel very confident will qualify at this point.

For the next tier, you can do the math: If the cutoff indeed ends up higher than last year’s 9.8700, gymnasts looking to advance will in all likelihood need multiple 9.900-plus scores. That means that athletes like Maryland freshman Reese McClure, who scored 9.900 both of her last two outings on floor, have a distinct advantage over the likes of Belle Huang, who has topped out at 9.875 thus far. That also means we shouldn’t take our eyes off Seattle Pacific’s Darian Burns and Kent State’s Jade Brown, both of whom have a higher score range than some others on the list but topped out at 9.925.

On the wildcard front, keep an eye on Temple’s Faith Leary, who was in a strong position on this event for a few weeks before going AWOL. We don’t know her status, but if she returns, she could easily become a factor. Others with high peak scores but much lower scores still to drop include Alexis Hankins and Stacie Harrison.