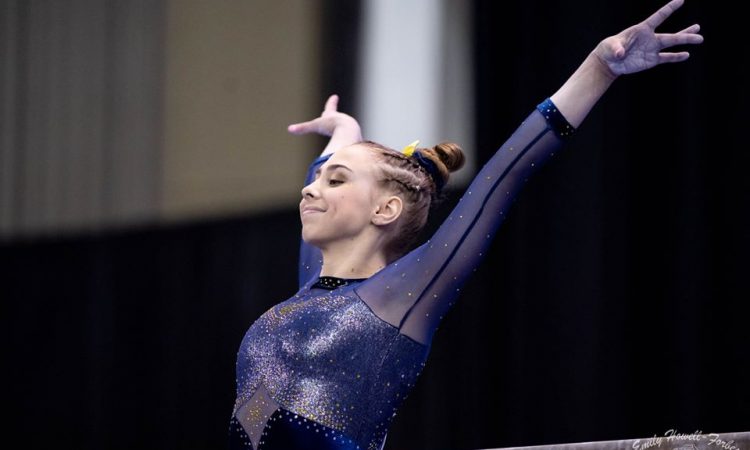 HELLO HI BIG TEN GYMNASTICS IS ON ESPN2 AND BART AND KATHY ARE COMMENTATING SO THIS IS THE BEST THURSDAY NIGHT OF YOUR LIFE THUS FAR LET’S EXPERIENCE IT TOGETHER.

This meet really feels like an event. It’s such a gift to get to see this matchup presented at the top tier of gymnastics broadcasting—especially after the catastrophe of the Stanford live stream on Monday. #scarred

The meet shouldn’t be that close, but also, should it? Because Michigan is the superior team in almost every way on paper (besides a slight floor deficit) but in some intangible way it sort of got off to a slower start, and while it has its inaugural 197 now, it’s by no means out of danger here.

This is really a meet that could be decided by beam, which has let both of these teams down in a big way once this year. But if the result is a matter of whose hit routines are better instead of who counts falls, we’ll be keeping a close eye on Nebraska’s technically fallible and depth-challenged bars rotation and Michigan’s fine-but-definitely-not-there-yet vault landings. What that means is we won’t know who wins yet by the end of Rotation 2, but we’ll have a pretty good idea how much fundamental routine gap there is between these two teams.

Piringer (UNL): Nice full, open body position until the end, looks a little short with a hop back.. 9.825

Verceles Carr (UNL): One and a half, underrotated and looks a little startled by the landing, small step back. 9.875

Dujakovich (UNL): One and a half great, chest down a touch as she absorbs the landing, hop forward. 9.825

De Jesus (UNL): One and a half, close to stuck. The best one. Small hop to one side. In replay, landing looks off balance to the side. 9.875

Brooks (UM): Blind to pike Jaeger, good, toe on to bail great. FTDB nailed. Rocks back on her heels and makes me nervous but she’s there. 9.85 WHAT? Excuse me?

Houchin (UNL): One and a half beautiful, hop forward. 9.9

Those Michigan bars scores felt a little tight to me, but consistency over the lineup kept the meet roughly level.. Hoping things stay consistent as the teams rotate.

Thaler (UNL): Maloney to Pak, all right, little leg breaks. Blind full double back, stuck-ish right on the edge of the four-incher. 9.75

Mariani (UM): Full, a little higher than Koulos but not so much distance, touch of leg sep. Good, close to stuck. 9.825

Brenner (UM): Definitively funky on the table but good in the air and STUCK. 9.95

Verceles Carr (UNL): Blind to pike Jaeger, lost form a bit on the catch, to overshoot. Blind full double back and the tiniest scoot to salute. 9.825

Brooks (UM): One and a half twist, a beauty, very technical with a hop forward. 9.9

De Jesus (UNL): Short on the first handstand, Ray to overshoot with flexed feet. Double lay with a bit of leg sep, stuck with a massive salute. 9.85

Wojcik (UM): One and a half, flings it out too far and it’s underrotated, looks like she’s got it for a second and then staggers back and sits it. 9.275

Michigan going to want to get a good floor rotation up here because Nebraska’s can be immense and only a tenth and a half margin won’t be enough to feel good. Bars was tight for both teams today, but Nebraska should feel good about that rotation.

De Jesus (UNL): BHS LOSO, lean back but saves it. Straddle to sheep, not good, cat leap side aerial tentative but good. Double full stuck-ish but chest way down. 9.8 oh THERE’s the crack!

Funk (UM): Double pike, overrotated but keeps it in bounds and roughly contained into a lunge, front lay front full quick but good. Switch side Popa wolf full, overrotated, Rudi well done and landed basically in the middle of the floor. 9.8

Curtis (UNL): Wolf punch front, arm swing, lifts a foot, swings again, got it. BHS LOSO with another arm swing, switch split. One and a half a bit underrotated, step back. 9.8

Thaler (UNL): Front aerial BHS BHS, adjustment. Switch back tuck, question on the split, one and a half stuck-ish. 9.9??

Brenner (UM): Full in, moves the front foot. One and a half front lay, double pike overrotated and rebounds back – Kathy started saying it was a good finish and then had to change her mind halfway. 9.825

Houchin (UNL): BHS LOSO, pretty pretty stuff, switch split. Side aerial, looks so good and then she doesn’t get the foot down and has to have a bend check moment, double full really good. 9.725 cute

Brooks (UM): Great full in, one and a half front lay and misses the punch, layout loses form but she gets it to her feet. Tour jete half split full lovely. Double pike, hop back. 9.875

Hassel (UNL): BHS LOSO good, front aerial, split sheep ugly. Full in, one and a half twist leans to the side but hangs on. 9.875 that should definitely have been better than Thaler.

THESE JUDGES ARE SO HAPPY. Nebraska got the best of it—if you’re counting, that was four sizable checks in a rotation that went 49.150. But Michigan got gifts too for a fairly sloppy floor rotation. Advantage Michigan still, but there’s not enough margin for the Wolverines to make mistakes which is exciting because it’s January and beam.

Farley (UM): BHS LOSO LOSO, square and landed well with leg form. I love that she takes up like half the length of the beam with her triple series. Split split half, iffy split, 3/2 turn great. Side aerial to split, gainer pike not high but stuck. 9.875

Curtis (UNL): Double pike, major rebound back. Front full front lay is good, switch ring switch half with not much oomph. Double back with a big lunge but keeps the front foot down. Well, in slow motion she didn’t, but that’s life. 9.825

Mariani (UM): Full turn, side aerial split straddle quarter is slow but steady. Beat jump witch side and spots the end, BHS LOSO. Putting together a good one, r/o one and a half with a tiny scoot forward. Good one. 9.85

De Jesus (UNL): This music inspires rage in me that I struggle to express. Double back, landed well, not pretty switch side Popa, double pike underrotated and pulls it out but chest down. 9.875

O’Hara (UM): Full turn, side aerial BHS, split double stag. Side aerial 3/2 twist, interesting combination. Really pretty, confident, only concern is her momentum on the acro series was a little odd, but it’s probably not a serious issue. 9.825

Dujakovich (UNL): Double pike good, Rudi overrotated with a sizable scoot back. Tour jete half Popa, well short of splits, one and a half front full doesn’t look easy for her but it’s around. 9.825

Houchin (UNL): Two and a half twist good, pretty leaps, some of the only good ones in this rotation. One and a half front full, double pike close to the line with her back heel but stays in. 9.9

Funk (UM): BHS LOSO and bounces straight off. Not typical for her. Switch side quarter, the Popa is so lovely. Side aerial back full, odd feet on the landing but sticks it. 9.325

Hassel (UNL): Front double full, jumps forward and improvises and arabesque on her feet which I love. One and a half front lay stuck dead, Rudi to straddle. 9.925

Wojcik (UM): Front aerial to beat, switch split. So pretty. BHS BHS LOSO, I was nervous in the air but she nailed it. Full turn, cat leap side aerial emphatic. One and a half a touch short with a step back. 9.875 that landing killed her.

Piringer (UNL): Double back, okay, hangs around in the corner for what feels like forever waiting for the right time to start her choreography. One and a half front lay awkward stick, switch side Popa short of split. Double pike solid.

Frankly oddly scored throughout but great to see the Big Ten so competitive and always fun to watch one come down to the wire. Sierra Brooks seems to be settling. Unfortunately, Natalie Wojcik isn’t. Michigan is still the better team but has some consistency work to do, while Nebraska is firing on all cylinders. 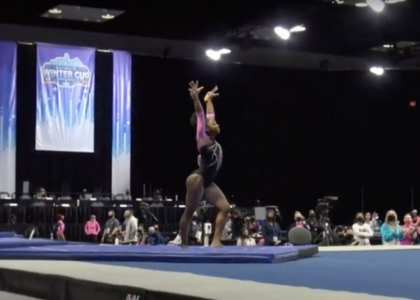