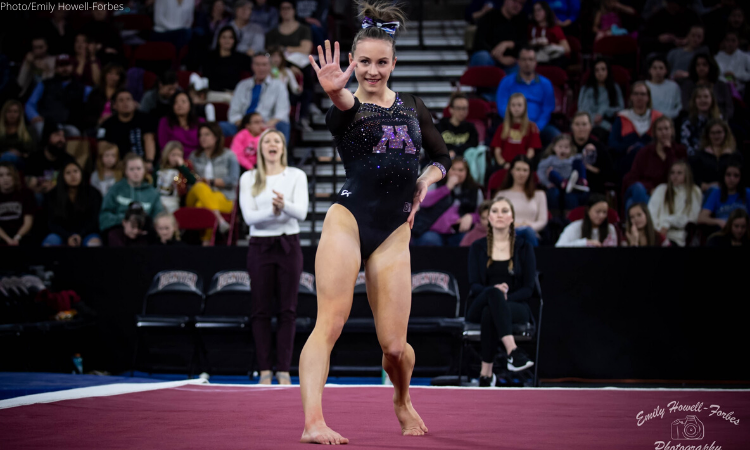 We’re nearing the end of the first month of the season, and scores at this point are going to start to matter. Teams are finally starting to hit their stride and rankings are starting to make a little more sense. You don’t want to miss any of the action.

Why You Should Cancel Plans For It: Florida snapped LSU’s years-long home win streak with this meet last year, and at the rate the Gators are going, they’re poised for another big win with a hit performance. But they’ll need more than home field advantage to advance past the Tigers, who look a little more complete week by week.

What We’re Watching: The gymternet has been rooting for Trinity Thomas to get a 10.0 since she started her college career, and a big stage like tonight could very well be the place for it. Granted, we’ve said that at almost every big Florida meet thus far. But a perfect score tonight would be a great storyline with Thomas coming off a rough (by her standards) performance at Missouri last week. We’ll also be looking to see if Alyona Shchennikova’s bars absence last week was a one-off or a longer chance to rest and prepare; LSU would want a hit from her tonight for the scoring potential it would bring.

What Else You Should Know Before Tuning In: Another week into the season, another ESPN2 matchup! Tell your friends without premium channels to tune into this one.

Why You Should Cancel Plans For It: Minnesota has been stellar to start 2020. The Gophers are coming off a record-breaking beam rotation that included Lexy Ramler’s first career perfect 10.0 last week. Illinois has been quietly cruising in the mid- to high-195s, proving it can just about keep up with the conference big dogs. The Illini struggle on vault, but have bar and beam lineups to compete with the best. Look for Illinois to push toward a 196 and the Gophers a 197.

What We’re Watching: This should be a meet filled with beautiful gymnastics across the board, but especially on beam where both squads shine. Don’t miss Mia Takekawa, Shaylah Scott, Lexy Ramler or Ivy Lu here. Keep an eye on Ona Loper in the all around; she was within five hundredths of a point of Ramler last week.

What Else You Should Know Before Tuning In: Illinois is coming off a two-meet home stand. The Illini have one solid away total already, but every big away score counts come NQS o’clock, so this one is important.

Metroplex Challenge with No. 1 Oklahoma, No. 4 Denver, No. 5 Alabama and No. 18 Georgia

When You Need to Tell Your Friends You’re Busy: Saturday, January 25 at 8 p.m. ET (Flo)

Why You Should Cancel Plans For It: This more than previous Metroplexes (Metropli?) feels like the makings of a legitimately close competition, with two of the reigning top four teams joining SEC squads that are rising from the ashes (with Alabama doing slightly better on that this season). Denver has given Oklahoma some reasons to worry in past matchups, and the same can be said for Alabama and Georgia; plus, Oklahoma and Alabama both had banner nights when they met last week.

What We’re Watching: It wouldn’t be an invitational or ”challenge” meet without some odd happenings, so tonight’s meet is worth watching for that suspense alone (if you can spring for Flo). It’s also worth noting that all of these teams but Georgia and Alabama have done podium meets already this season, so they’ll have had the experience recently.

What Else You Should Know Before Tuning In: Alabama’s Lexi Graber could be limited this week; she was coming back from an ankle injury last week and did only vault and bars. Oklahoma sophomore Olivia Trautman also returned last week, but only on bars; this seems like a breakout meet she’d be expected to contribute more for.

When the Meet’s Happening: Saturday, January 25 at 2 p.m. ET

Why You Should See the Error of Your Ways: After Arizona defeated Oregon State last weekend in a tri meet at Sacramento State, the Beavers will be out for redemption after subpar vault and bars rotations took them out of what was a close meet until the final two rotations. With five Pac-12 teams sitting between 22nd and 29th in the rankings, this meet will be a good opportunity to see which of these two teams has a better shot at finishing in the top half of the conference at the end of the season.

Need More Proof? Isis Lowery and Kaitlyn Yanish have been two bright spots for Oregon State despite its struggles this season. They both excel on floor, but also watch for Lowery on beam and Yanish on vault. Senior Christina Berg has been awesome to watch on bars for years for Arizona, but make sure to keep an eye on freshman Zaza Brovedani in the bars rotation as well, in addition to beam.

Why You Should See the Error of Your Ways: Kent State is the favorite to win this matchup (at least on paper), especially following a particularly strong meet last weekend. That being said, Lindenwood has quietly and consistently been proving its competitiveness with DI teams for a while, and the last time the Lions came up against Kent State and Texas Women’s, it was the victor. The Lions are missing some key routines, but even so, they are capable of doing very well here if they hit. Texas Women’s didn’t have its best meet last week, and it will be looking for improvement on that performance. UW-Oshkosh has the potential to be one of the best teams in DIII this year, and it has greatly improved the last couple years.

Need More Proof? Kent State freshman Rachel DeCavitch scored a HUGE 39.400 in the all around last week, and with her double Arabian on floor she is someone to keep your eye on. Texas Women’s sophomore Isabel Goyco is beautiful on beam and floor, and was rewarded by winning titles on those events last week. Lindenwood senior Emily Milliet has been absent so far this season, but was spotted training last week so it’s possible she may make an appearance. UW-Oshkosh senior Baylee Tkaczuk has a particularly exciting bars routine, which includes a Tkachev and Pak salto; both rare skills for DIII competitors. All in all it should be a unique matchup and a good opportunity to see some people and teams that get overshadowed throughout the year.

Why You Should Clear Space on Your DVR: Despite the rankings difference, these teams are essentially an even match. Both have emerging all arounders in Cassie Stevens and Helen Hu, though both have performed various combinations of the four events over the past few weeks. Their presence here could make for an interesting individual competition, especially if Derrian Gobourne, Drew Watson and Morgan Porter have something to say about it as well.

What to Look for If you Missed It: Regarding those all arounders mentioned above, which ones actually did all four events and how did they fare? Also, will Morgan Porter bring out her newly revealed 10.0 start? She’s done it before with good results, but could play it safer this evening depending on how things go.

Why You Should Clear Space on Your DVR: Coming off of a 197 and a bye week, Utah will return home and look to put up another good score in what has been a surprisingly good start for the Utes after losing over half of its routines from last season. The Red Rocks will host Arizona State, who is also off to a decent start despite its best gymnast, Cairo Leonard-Baker, only performing three routines so far this season. If she can get back into more lineups this weekend, expect this meet to be a bit closer than the rankings would suggest.

What to Look for If you Missed It: Utah’s Kim Tessen has been having a great senior season thus far, but also keep an eye out for the freshmen duo of Maile O’Keefe and Abby Paulson, who both shine on beam and floor. Leonard-Baker could challenge Tessen for the bars title for the Sun Devils, and Morgan Wilson’s beam set could contend for an event title as well.

Why You Should Clear Space on Your DVR: Monday’s only meet should be a good one. Both teams earned season-highs last week, with UCLA finally putting together a hit meet and Stanford wanting to put a handful of falls behind it. The Cardinal, unfortunately, unveiled a couple of season-ending injuries, so it will be interesting to see if last week’s lineups stick or if Stanford continues to make changes.

What to Look for If you Missed It: Last week saw the return of Madison Kocian for UCLA, who gives the floor lineup more depth and the bars lineup a near-automatic 9.9-plus score. Kyla Ross has scored perfect 10s on bars the past two weeks, so look for her to try to continue that streak or expand it to another event or two. Stanford freshman Chloe Widner has looked impressive thus far on beam for the Cardinal, and if Kyla Bryant is healthy after suffering a scary beam fall last week, watch for her energetic floor set.