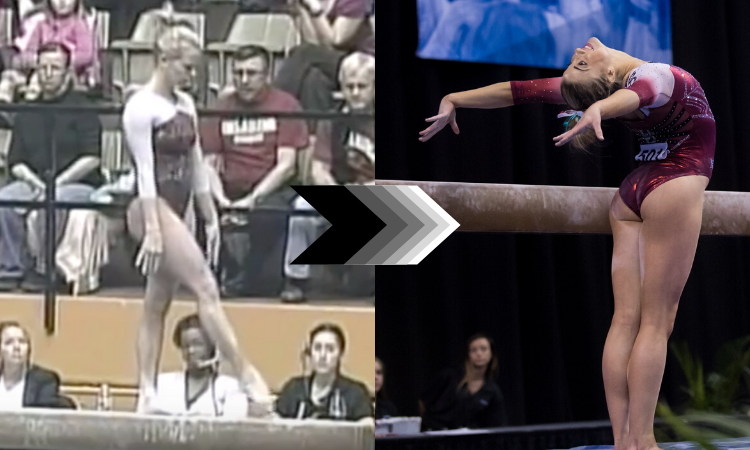 You all don’t know how hard it was to narrow this list down to 15 routines, there were just too many iconic, beautiful, thrilling performances to choose from over the past 10 years. We literally had 25-plus nominees in our Google Doc to start the process. But unlike how gymnastics enjoys handing out ties willy nilly and regular season conference championship trophies *cough* participation awards *cough* for every little thing, we felt like it was our duty to make a few hard decisions.

Don’t agree with our routines or ranking? Think we left some pivotal routines off the list? Let us know your favorite floor routines from the 2010s in the comments or on social media!

15. Jessa Hansen (Iowa, 2010): All you need to know about this routine you can learn looking at the judge’s face when Hansen sticks her final pass cold. The choreography and double front opening pass make it a real showstopper.

14. Aja Sims (Alabama, 2017): We have to admit, the sirens aren’t our favorite thing in the world, but the way Sims just has fun with this routine makes it even better. Plus, add in crowd engagement on multiple occasions with some well-known dance moves and you have a winner.

13. Elyse Hopfner-Hibbs (UCLA, 2010): We loved EHH’s choreography in elite, so when she came to UCLA, we knew we were in for something great—and she didn’t disappoint.

12. Kennedy Baker (Florida, 2018): Apart from the stellar Dos Santos, Baker had an uncanny ability to captivate a crowd with her dancing, having one of the best Florida floor routines of all time. It’s that quiet attitude in her choreography that makes it so great to watch.

10. Gracie Kramer (UCLA, 2019): Compared to Ohashi and company, Kramer’s routines can be considered underappreciated, but we love how she falls completely into the choreography and doesn’t hold back on anything, from the movements to the facial expressions.

9. Sydney Sawa/Felicia Hano (UCLA, 2014/2018): It has to be a pretty special routine to be praised and celebrated twice in one decade. It’s hard for a recreation of something to be just as good if not better than the original, but Hano managed to do just that with Sawa’s iconic alien fighter routine—which was pretty epic to begin with.

8. Zoe Draghi (California, 2016): We love us a gymnast who is also a contemporary dancer. Draghi and her cohort changed everything for the Golden Bears, turning around their results but also establishing them as a team known for artistry.

7. Katelyn Ohashi (UCLA, 2018): Does this need much explanation? Ohashi went viral not once but twice, with the second for a routine fairly similar to this one. It’s just perfectly crafted, and Ohashi’s ability to show it off made it stand out that much more.

6. Brittani McCullough (UCLA, 2010): The STOMP! The walk around the entire floor for a full 8-count! The music! McCullough won the national floor title with this routine and we’re going to pretend it was because of the choreography alone (but the tumbling was pretty darn good too).

5. Alicia Boren (Florida, 2019): Boren’s senior year medley of well-known dance moves through the years fits perfectly on a list of top routines of the decade and was, in our opinion, severely underappreciated when it was being performed in 2019. It’s fitting Boren capped it all off with a national title on the event.

4. Nina McGee (Denver, 2016): We think what we love most about this routine is the pure joy McGee expresses when performing it. Plus, she’s doing it with rods in her legs. Talk about impressive. But even after all that, this routine captivated every single fan in the arena at 2016 nationals, no matter what color shirt they were wearing.

3. Anna Li (UCLA, 2010): The top UCLA routine on the list comes in at No. 3—we’re just as shocked as you are. We love everything about Li’s senior year number, especially the fact that Miss Val created it with Li’s life and journey in mind. From the music to the dramatic movements, we can’t get enough of this routine.

2. Lloimincia Hall (LSU, 2014): Crowd reaction and engagement can play a big part in the success of a routine. And that fact was proven when Hall went viral in 2014 for this iconic routine that included LSU band music and her signature seat drop. We get chills just thinking about it.

1. Chayse Capps (Oklahoma, 2015): Capps’ routine was really the one that kicked off the notion of Oklahoma being a player in the great choreography space, at least in our minds. Capps’ contemporary dance training + brilliant song selection made this routine our favorite of the entire decade.