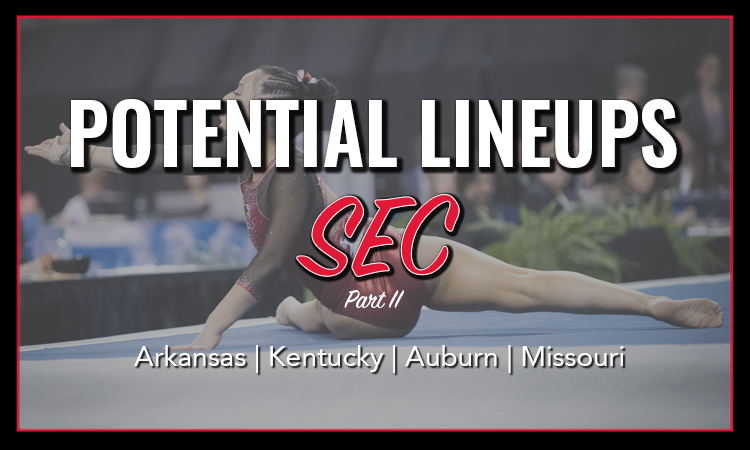 To call this the “bottom half” of the SEC in terms of rankings is almost misleading since all four teams had standout 2018 seasons with a lot of room for improvement. In a conference that was once dominated by a select few schools, these four teams (three of which made nationals either as a team or through individual qualifiers last year) are on the rise and will look to build on that success in 2019.

The Razorbacks ended their four year nationals drought after a solid season which saw conference honors and school records galore. This year, they’ll look to fill considerable holes in the lineups after the graduation of three seniors who contributed heavily last season. Though one member of the incoming class is already injured, the four remaining competitors certainly have the potential to step up to the plate.

Two critical postseason vaults will no longer be there for Arkansas, but Amanda Elswick, sister of former Razorback Heather Elswick, will be incredibly valuable to the lineup with her powerful Yurchenko 1.5. The 10.0 start value should bring high scores to replace those of Amanda Wellick and Braie Speed, as will the comfortable fulls from Savannah Pennese and Kennedy Hambrick. McGlone’s return from injury will also be welcome. Vault won’t be the deepest lineup for the Razorbacks in 2019, but Sydney McGlone and the freshmen should work to fill the holes.

The Razorbacks soared from a national ranking of 34th on bars in 2017 to be the seventh best team in the country in 2018. Looking to continue that success in the absence of Wellick and Speed will be freshmen like Lovett, who has a great swing and beautiful lines. Hambrick also brings a competitive set, with a capable piked jaeger and full-out dismount. If Derrick returns from injury before season’s end, she could also be a factor. Similar to vault, this lineup won’t be the deepest for Arkansas, but don’t count it out just yet.

The prospective beam lineup looks a little more secure for Arkansas, with more returning routines and a higher scoring potential. As for the freshmen, Elswick and Hambrick bring clean and crisp acro series, and Bailey Lovett’s set looks compelling for her amplitude, though her consistency isn’t always there. All three could see lineup time throughout the season, as could returner Sydney McGlone (though she had similar consistency issues to Lovett back in 2017).

Even more than on beam, the combination of veteran depth and freshman capability could establish floor as the most exciting and high-scoring of Arkansas’ lineups this season. Elswick brings a double Arabian that should score well in college, and Hambrick has multiple passes that could factor in for a high-scoring routine. Pennese and Lovett are also sturdy tumblers who will bolster the lineup, along with the returning McGlone, who shined on floor prior to her injury.

Depth could be a recurring issue for Arkansas this season, though the talent is certainly there for it to capitalize on the success it had last season, even making another nationals run. It will be exciting to watch these freshmen step up to fill the shoes of the talented seniors who left before them since they have the potential to be standouts for years to come.

Making nationals for the first time was the capstone to a standout year for the Wildcats, who should look to improve on that performance this year. With only a handful of routines to replace from postseason, the freshmen should work in tandem with this year’s stellar senior class to put up another solid performance. Though freshman Arianna Patterson will be out for now with a torn Achilles, there remains a lot of potential in the incoming class.

The freshmen offer some compelling options for the vault lineup that, when considering remaining options from last year, could make it one of Kentucky’s most competitive top six to crack. Cally Nixon’s Yurchenko full is powerful and should see lineup time throughout the season. In addition, Josie Angeny brings a full that could use some cleaning up, but it still could be a strong backup option.

This lineup has the most glaring holes from last season, with two postseason slots needing to be replaced. Bars isn’t the strongest among the freshmen, but they could still fit into the top six. Among the new class, Angeny brings a Jaeger to bail combo and a strong double layout dismount that could make a compelling case. Displaying similar ability is Anna Haigis, whose Gienger has a great swing. Expect at least one of the freshmen to make an appearance.

Beam was Kentucky’s highest-ranking event last year, and the incoming class brings the routines to keep it at that level. Angeny’s triple series and split jump + sheep jump combo make for a stacked routine that should fit well into the lineup. In addition, Nixon and Haigis both have the skills to make for viable backup options. It will be interesting to see which newcomers make the cut from week to week.

Kentucky has plenty of routines to choose from for its floor lineups this year, with the freshmen bringing some especially viable routines. Angeny’s double pike routine is simple yet strong, with her middle pass of a back 1.5 twist + front tuck + stag jump serving as a highlight. In addition, look for Nixon and Haigis to offer backup routines, with Haigis showing a lot of personality in her choreography.

Kentucky has all the fixings to match its excellent season from a year ago. As a team that was very much on the cusp of making nationals in years past, it will be interesting to see how it fares in the new postseason format in which even less teams qualify. Nonetheless, the potential showed by this team defies all accolades.

The Auburn Tigers enter the season in the enviable position of having lost zero routines from the previous year. That will make breaking into lineups all the more difficult for this large freshman class, but if they bring what they’re capable of from J.O., it should be interesting to see how they factor into this talented team throughout 2019 and beyond.

The returning Auburn squad doesn’t have the most depth on vault, but the newcomers could work to change that. Among the freshmen, Derrian Gobourne brings a fourth 10.0 start value to Auburn’s vault lineup. Her Yurchenko 1.5 will serve as a crucial addition. Reid Schaefer also has a dynamic full that could do well in the earlier half of the lineup, and Molly Frack’s could score well too.

In contrast to vault, bars is sure to be a stacked lineup for the Tigers in 2019. Expect Emma Engler to make a comeback on the event with her return this year. Gobourne will offer another huge routine on this event, having won the J.O. national title and scored well on it throughout her level 10 career. Frack and Schaefer also both have exciting sets, with Frack’s beautiful lines and Schaefer’s Jaeger to bail combo sure to score well in college.

Beam isn’t the top event for the freshman class, but there are still a number of options that could contribute big scores to the lineup. Frack has beautiful form throughout her routine, with a crisp acro series serving as the highlight of her routine. Gobourne will likely also enter the lineup, though the event isn’t as clean as her others. Sydney Wrighte hasn’t been seen in awhile, but beam could be her most likely contribution based on her tumbling and 1.5-twist dismount—if she can keep up her consistency.

Auburn’s lowest-ranking event last year will look to add depth from the freshmen, even though the returners put up good enough scores to make cracking the lineup a difficult task. Gobourne is the most obvious choice for a lineup slot, with a big full-in, strong leaps and a great overall performance quality. Sabrina Cheney’s tumbling isn’t the most difficult, but it makes for a strong set that could easily score well in college; double pike sets from Mia Schlarbaum and Schaefer could do the same.

The freshmen might not be the most likely contributors to Auburn lineups this season—apart from perhaps Gobourne—but the sturdy routines they bring will add plenty of depth to the up-and-coming program and bolster its nationals chances. With Gobourne in the all around and more standout performances from last year’s individual nationals qualifiers (and other equally strong competitors on the team), the ingredients might just be there for a strong postseason run.

Last season saw injuries and other inhibitions that prevented Missouri from rising to its full potential. This year, it brings in three strong all arounders that should be just just what the growing program needs. This year’s class will undoubtedly make some meaningful contributions that should bolster the team on all events, and the return of redshirt senior Becca Schugel should do the same.

All of this year’s freshmen bring vaults that could be usable for the Tigers in 2019, which will be helpful considering the current lack of depth on the event. Mya Cotner and Hannah McCrary both have usable fulls, with McCrary scoring especially well on the event in J.O. Most importantly, Frances Bidwill shows huge air on her Yurchenko 1.5. Expect redshirt junior Morgan Porter to play a bigger part in the lineup this year as well since she’s been training the same vault. If all goes well, two 10.0 start values could be a huge game changer for the Tigers.

Similar to vault, the freshmen will bring much-needed depth and create more options for the Tigers on bars. Cotner brings consistent J.O. scores that could translate into a recurring lineup slot. Bidwill and McCrary could also provide early-lineup options, though the event isn’t the strongest of their programs. Schugel’s return will also be welcome on the event since she was especially consistent on it prior to her injury.

Beam is the event least affected by the departure of last year’s class, which should set it up to be a top event for the Tigers in 2019 due to the addition of some stellar freshman performances. The top one of these should come from Bidwill, who shows strong combinations like a front aerial to split jump to beat jump, along with an overall sense of confidence. McCrary is also a great performer on the event, and Cotner could also bring a good set, though she isn’t as consistent as the others.

Floor could be an especially exciting event for the Tigers this season. Bidwill brings a giant full-in and shows a lot of strength in her leaps. Schugel may not appear right away on the event, but it was her highest-scoring prior to her injury and should thus be taken into consideration. In addition, Gabrielle Gottula, a sophomore, didn’t compete the event at all her freshman season but showed big tumbling passes prior to Missouri that would be really exciting to see this season.

Missouri comes into the season at the deficit of a strong senior class and with some huge recruiting classes on the horizon. Because of this, 2019 could be a sort of rebuilding year for the Tigers as they prepare for 2020’s potentially game-changing freshmen. But this year’s class will still surely bring some much-wanted depth for the Tigers and could influence the team in surprising ways.