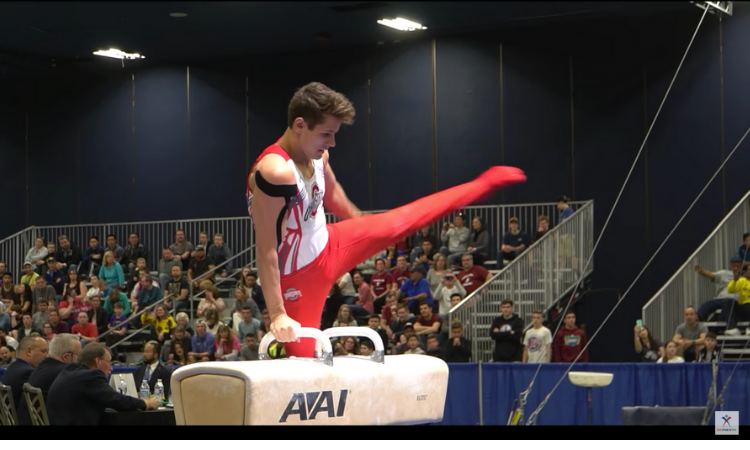 Confused about the difference between the men and the women’s scoring in NCAA? We’re here to bring a basic look at different skills and scoring deductions found in men’s gymnastics.

While the iconic 10 can still be found in women’s NCAA gymnastics, the men have adapted the FIG Code of Points that both the men and the women’s teams use in elite competition. The men have six events: floor, pommel horse, still rings, vault, parallel bars and high bar.

How the Team Scoring System Works

From December until mid-February, the 15-member teams participate in a six-up-five-count format where six gymnasts perform on each event and the five best scores count. From mid-February until the end of season, the teams switch to a five-up-five-count format. The exception to this rule is when a team wants a gymnast to compete in the all around competition, but not count that gymnasts’ score toward the team total on every event.

For example, if a gymnast excels at all events except high bar, that gymnast is allowed to compete high bar during his team’s high bar rotation, but his score will only count towards his all around total and not the team total. It allows gymnasts to still be successful all arounders while not affecting the team results on certain events. The only caveats to this rule are that the all around gymnast must be the last to go in that rotation, and he must be competing on at least three events that count towards the team total.

The most obvious difference between the FIG Code of Points and the NCAA rules is the addition of the stick bonus on every event except pommel horse. If a gymnast sticks the landing of a dismount or tumbling pass and clicks his heels together, he will receive a one-tenth bonus.

Additionally, if a gymnast is too tall to safely perform on either the parallel bars or the high bar, with the permission of the head judge, the apparatus may be raised. On parallel bars, the bars may only be raised for the approved gymnasts and then must be lowered for the other athletes. On high bar, the apparatus is raised to accommodate the taller gymnasts, and landing mats are placed below to compensate for the height difference for the shorter athletes.

The criteria for team rankings changes several times over the course of the season. These rankings, created by the NCAA Men’s Gymnastics committee using scores submitted online, help determine which teams qualify for the NCAA championships each year. The teams are ranked using the criteria below:

Beginning of season – February 3: Average of all team scores

March 4 – March 31: Using the team’s four highest scores (two of which must be from away meets), drop the highest score and average the remaining three

April 1 – April 7: NCAA National Qualifying Average (NQA) – “Select the four highest scores, one of which must be a five up/five count score, counting no more than two home meets. The highest of these four scores will be replaced with the conference team championship meet score. These four scores will be averaged to determine the NQA.”

Breaking Down the Scores

Like in the FIG code, each individual gymnast’s score on an event is determined by combining the difficulty and execution scores calculated by the judges for each routine.

Each skill a gymnast performs has a value attached to it. These values are added together to comprise a gymnast’s difficulty score (d-score). On each event, with the exception of vault, the gymnasts perform 10 skills that counts toward their d-score. Gymnasts can also increase their d-score by performing certain skills in combination. There is no limit to how high a gymnast’s d-score can be.

On vault, since only one skill is performed, each vault has a predetermined value that the judges use as the d-score.

Execution scores (e-scores) start at 10.0 for each gymnast, and points are taken away for errors made by the gymnasts in their routines. Once the e-score is calculated, it is added with the d-score and a gymnast’s score for a routine is determined.

Below is a list of common deductions seen in men’s NCAA gymnastics:

Hand movement in handstands = 0.1 per movement

To view all of the NCAA rule modifications for men’s artistic gymnastics, click here.

This skill can be performed tucked, straddled or laid out. For additional difficulty, the gymnast may choose to perform this skill with an additional half or full twist.

To get credit for this skill, it must directly connect to a giant or another release move. There is a deduction for having to kip cast to handstand after this, or any skill where the gymnast flips over the bar. 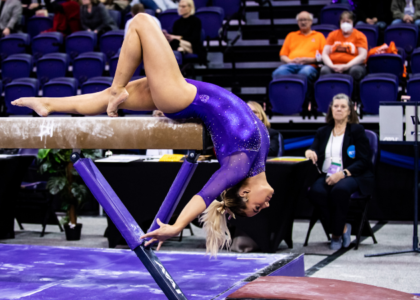