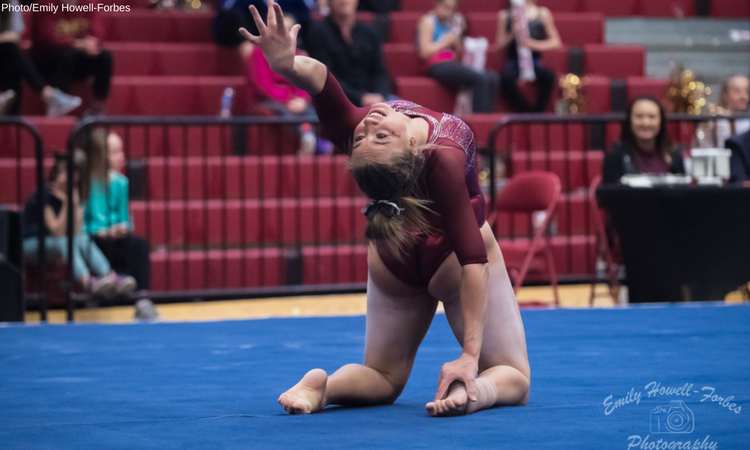 Iowa State hosts Oklahoma, Denver, and West Virginia for the Big 12 Championships this evening! The title will likely go to the Sooners, who have been ranked No. 1 as a team ever since week 3–that’s nine straight weeks. The team is in pursuit of it’s seventh straight Big 12 title, something that no other team has done before. Barring any mistakes, we should see a battle between the Mountaineers and Cyclones for third and fourth place, while the Pioneers are likely to take second. What will likely be more of an exciting race is the individual event and all around titles. While the Sooners are the top team, each of the teams has exciting competitors to watch for. Denver’s Maddie Karr should challenge for the all around title, as will Iowa State’s Haylee Young. Pioneer Kaitlyn Schou’s exquisite beam work puts her among the top in the conference, as does Nikole Addison’s floor. Pioneers Karr and Lynnzee Brown, Cyclones Sophia Steinmeyer and Meaghan Sievers, and Mountaineer Kirah Koshinski all have dynamic 10.0 start value vaults amidst Sooners like Maggie Nichols, Brenna Dowell, and AJ Jackson. Pioneer freshman Emily Glynn has emerged as a bars star for the team amidst upperclassmen and Cyclone Hilary Green is one to watch for on the event.  On beam, Young shines for the Cyclones, while the aforementioned Schou, Karr, and freshman Mia Sundstrom all have solid routines for the Pioneers. Mountaineer Carly Galpin is the only Mountaineer to have a RQS over 9.8 on the event. Young’s signature event is floor, and Karr is one to watch on the event in addition to Addison. Koshinski also has a dynamic floor routine for West Virginia and is the highlight of the event for the team along with Zaakira Muhammad. Look for these races to shape up as the meet goes on!

Intros are underway and the competition is about to begin!

Insta saw it first, but @samantha_craus & today’s leo are just too pretty to not share twice! 😍

We’re just ONE hour away from the start of the Big 12 Championship! pic.twitter.com/8ZCJJmG4Fv

We're starting on floor today for the Big 12 Championship!

Tun UB: nice straddled jaeger; good bail to hs; dlo with a step, but that gets WVU back on track.

Schou VT: yfull with a hop, but otherwise good!

Jackson FX: huge opening double pike a lil overrotated. more control on second pass. Great to have her back in the lineup! back 1.5 to lay full good to end it!

Young BB: nice switch half; apparently had a wobble before they cut to her; nice 1.5 dismount stuck.

Denver opened up the meet with a season-high road score on vault, highlighted by Brown and Karr’s yurchenko 1.5s. WVU’s bars score is pretty in line with how it has been performing on the event throughout the season. While ISU had some struggles on beam, it still managed an upper-48 score on the event. The Sooners were great as usual on floor, and Jackson returned to the lineup after being out for unknown reasons.

Lehrmann VT: good yfull in the air with a hop. 9.8

Sundstrom UB: clear hip to a great tkatchev; nice his on bail; little short on last hs; stuck DLO. Another great bar routine for the Pios. 9.875

Chesnok UB: giant full tkatchev good; best bail of the Pioneers so far with a nice hs; again short on last his; tucked full in, just a small hop and a little low chested. good routine! 9.85

Glynn UB: nice opening hs to clear hip gienger gorgeous; nice next hs to bail to hs; hits last hs (first of the Pios to do so in this rotation); tucked full in, stuck. That’s their best routine thus far. 9.95

OU again had a great vault rotation, capped by Nichols and Jackson at the back end of the lineup. DU really came out strong again on bars, its 49.475 being a new program record. I didn’t catch much of WVU beam, but from the numbers it looks like a pretty shaky rotation. Iowa State was strong on floor as it usually is, though its only 9.9 came from Haylee Young, the team’s anchor. At the midway point, this meet is much closer than expected, so if OU falters, DU could sneak ahead.

Addison BB: secure series; little bobble on split leap; rest of leap series good; secure side somi; gainer pike with just a hop in place; that’s how you want to tart beam off! 9.8

Showers UB: missed most of routine but just a hop on ftdt. 9.85

Glynn BB: swtich switch straddle good; bhs loso, small check; off on standing loso. I have NEVER seen her hit that. Why is it there??? nice full turn; good landing on gainer pike. 9.25

Sundstrom BB: feed froze on her leap series but looks secure; bobble on side aerial but covers pretty well; secure full turn; lolol Flo is saying this is Maggie Nichols on bars; check on series but she stays on–she fell on that the past 2 weeks; gainer full, tiny step. 9.775

Koshinksi FX: 1.5 lay good; last pass is a well controlled double pike. Looked like a good routine from what I saw. 9.875

Iowa State had a solid vault lineup, led per usual by Steinmeyer and Sievers. OU was great on bars as well, setting a new program record on the event. DU recovered from a fall by Glynn in the second spot to post a 49.2, while WVU also recovered nicely on floor. Time for the last rotation!

Johnson had a fall to lead off ISU bars.

Showers BB: bobble on full turn; good series; her leap series is so unique! good on dismount. missed the rest. 9.8

Karr FX: great double pike to open; love the kick in her choreo; 1.5 to lay full with a secure landing; tour jete 1/2 to wolf full good; she’s really performing this! fhs rudi, controls it well. Awesome routine for the Pios. 9.9

Nichols BB: tentative on leap series but doesn’t give much away; 1.5 dismount nearly stuck; that’s all we got to see of that. 9.9

It was a solid conclusion to the meet! The Mountaineers had a solid vault rotation, though not much was shown by Flo. The same viewing comes from ISU, who struggled on bars a bit but still managed to edge out the Mountaineers. OU didn’t have its best beam rotation, but it still managed a hit six for six routines and a score in the low 49s on the event. The Pioneers’ floor lineup built throughout the meet, capped by Karr and Addison with her DLO. Also of note, Karr’s all around total was just .025 below Sooner phenom Nichols. The Sooners took this meet as expected, but DU’s 197.075 will be a great help to the team’s RQS and it is the team’s highest road score.