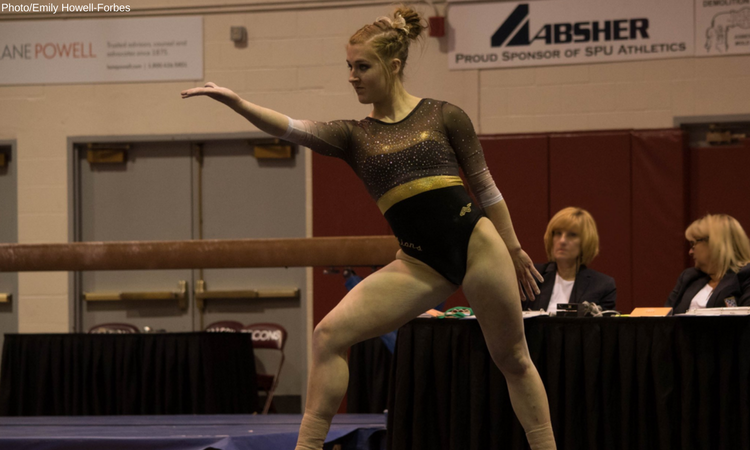 Illinois is the favorite at this home tri, but not overwhelmingly; while a repeat of its highest scores could keep it out of firing range of the other two teams, its average day is absolutely in reach. Bowling Green in particular is on a bit of a hot streak, with senior Laura Mitchell recording a school record on beam just last week. Jovannah East has entered the all around the past three weeks, scoring as high as 39.400. Lindenwood also set a season high last week, breaking the 195 mark on senior day and showing this team’s ability level after a few tougher meets earlier in the season. If it can keep that momentum, it could absolutely upset one of its DI opponents if they have some errors.

Consistency has been the challenge of the season for the Illini; based on individual top scores there is no reason that this team should top out in the low 196s. Hits from all arounders Nicole Biondi and Rae Balthazor are essential, and look for great routines on beam and floor from Haylee Roe as well.

ROE – ILL: FTY STUCK. A bit of body position in the air but not much.

KEARNS – BGSU: Nice switch leap combo, switch to LOSO a tiny bit off lne but adjusts with no problem, handstand to back drop choreo is BADASS. Gainer full stuck.

BIONDI – ILL: Y1/2, beautiful in the air with a midsize step forward.

MEEKS – ILL: Full with a hop back, good in the air.

BALTHAZOR – ILL: Beautiful FTY with a hop back.

MITCHELL – LU: Fall on a release – too far from the bar, beautiful DLO dismount with a college stick that the judges probably aren’t falling for but still.

MITCHELL – BGSU: She’s cut off by the bottom of the screen but not missing this one. Flic loso beautiful, switch split is nice and secure. Cat leap side aerial a tiny bit off line but works through it, lean forward on side somi. Full turn awesome with aggressive arms, flies off the side of the screen on double twist dismount but it looked good.

SOKOLOWSKI -LU: Beautiful Gienger, clear him to Pak is great, misses a handstand on HB, full turn to double back with a shuffle back.

EAST – BGSU: Flic loso with crazy air, straddle to tuck full leap series is great. Switch to straddle 1/4, stick on a 2.5 dismount?!?! That was awesome.

BGSU got the padding it needed out of its strongest event. Illinois was really strong and a bit underscored on vault, while LU did enough to hold close. Staying on the beam is now the target for those two.

DWYER – ILL: Blind to pike Jaeger to overshoot is beautiful, another stuck dismount!

We got two and a half seconds of India McPeak dancing and it cut away. Op, it’s back. And it’s gone again. Franklin is also doing beam, we don’t care about that.

GIVENS: ILL: Full turn to Gienger with a little leg split, leg wobble on bail but it’s okay, full turn to double back fights for the stick.

LYONS – ILL: Blind change to pike Jaeger is amazing, great bail. Shy on a handstand on HB, deep on DLO and has to take a step forward.

Someone from Lindenwood just did a triple series on beam, uncertain who it is because I can only see the top quarter of her body. Oh neat, it was Taylor Colwell.

HOWELL – ILL: Too far on a pike Jaeger and falls. Now counting Lyons’ 9.675. Nice Pak, way overarches a handstand on high bar but fights for it.

HENRY – LU: Beautiful flic loso, I think her leap series was wolf hop switch side?? Lean on a side aerial, 3/2 dismount stuckish. No falls from what I’ve seen, it’s been super clean.

Mitchell beautiful in exhibition, too. 9.85!! Lindenwood is on FIRE.

Hey, thanks for doing my job for me Illinois sports communication team! <3

This is crazy close. Lindenwood being almost on 196 pace is NUTS. Watching how Illinois and BGSU match up through the next two rotations will be fascinating too. Sorry for the lack of BGSU ast rotation – this stream really doesn’t do floor so literally all I saw was some of McPeak’s dance sequence.

ROE – ILL: Oof, already off on acro series. Leap series is nice and solid, leans to hold the stick on 3/2 dismount.

BIONDI – ILL: Switch to straddle 1/4, beautiful. Flic loso, up on the toes of the front foot but that’s all. Cat leap front aerial is beautiful, full turn. 3/2 dismount with a baby hop. Beautiful!

We may literally just get to watch Illinois beam this rotation.

HOWELL – ILL: Full turn, already in love with her feet. Peng-stile pikeout is nailed. She is so beautiful. Gainer pike, stuck.

Think I saw Jovannah East hop back a little on vault in the background. It’s really hard to tell.

Shannon Goniwiecha (9.650) and Katie Morsefield (9.675) have led off on the vault. Still an opportunity for a good team score.

NOONAN – ILL: Sissone to gainer loso is awesome. Switch to split 1/2, misses a foot and has a small leg up check, cartwheel gainer full with a scoot back.

BALTHAZOR – ILL: Hitch kick switch side is lovely, flic loso over to one side of the beam but pretends it’s fine. Leg up on a kickover, beat jump to straddle 3/4. Gainer pike with a baby hop.

HODAN – ILL: Side aerial-bhs is beauuuutiful, switch to split perfect. Hitch kick to illusion a bit crazy but fine, side aerial? – gainer full stuck. That was pretty awesome. 9.95! Ties a program record on beam!

Fourth 9.9+ of the day on beam. It’s been pretty awesome.

Donovan in exo for Illinois.

With one rotation left, things have flipped. We'll head to the bars for the final portion of the meet. pic.twitter.com/KQLXmBPfiX

Vault is always a weaker piece for BGSU, so this isn’t unexpected. Lindenwood needs a 48.7 on vault to tie the highest score in the DII/USAG season. It’s also dropped down to third in USAG standings with strong performances from TWU and Bridgeport, but can retake #1 with very little effort.

Noonan hit for Illinois. I don’t think we’re going to get to see anyone else, unfortunately. I really want to see Lindenwood vault 🙁

BIONDI – ILL: Double back with a scoot back, I’m really distracted by the cards they’re using to choreograph the crowd yelling I-L-L-I-N-I in the middle of the routines. Front lay front full is awesome, good one!

HODAN – ILL: Front double thru punch front is gorgeous, back with a great Rudi. Queen of illusion turn <3

BALTHAZOR – ILL: Rebounds a little bit out of first pass, rest is nice and clean.

HOWELL – ILL: Floor music is Apologize by One Republic … and now it’s Fix You by Coldplay. Aw so beautiful <3 I basically didn’t even watch the tumbling.

Lindenwood is able to upset DI Bowling Green, which started out strong on its two best pieces and then lost a little ground. Lindenwood recorded the  highest score of the USAG or DII season so far, just beating the mark that TWU set this morning. It’s also more than good for Lindenwood to move back into #1 in USAG and MIC standings.

Illinois was next level today, scoring the ninth-highest team mark in program history and setting a season high by close to a point. It’s had such a struggle hitting at home this season, and to perform so exceptionally on senior night must mean a huge amount to this team. Plus, they’re just so beautiful. You have to be thrilled for them.