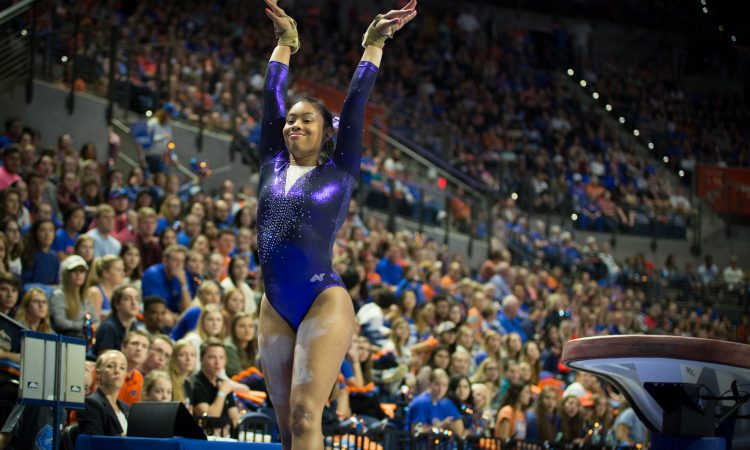 An exciting SEC matchup tonight will take place in Baton Rouge between the Tide and the Tigers. LSU is expected to win easily after their dominant performances the last two weeks, and Alabama’s most important mission is to get back on track after a few difficult weeks.

Since the first Friday Night Heights meet ran over tonight, here’s a little recap of rotation one from the PMAC tonight:

LSU had a few miscues on vault, with rough landings on Y1.5s from Myia Hambrick and Ruby Harrold. However, Sarah Finnegan goes 9.9 with her FTY, and Julianna Cannamela stepped in to lead the lineup with a 9.85. It seems that Kennedi Edney will be out of vault and floor tonight, though why is still a bit of a mystery.

Alabama too had some missteps, including a fall from senior Jennie Loeb, on bars. Kylie Dickson also had a near-miss for a 9.75, but was able to stay on the apparatus.

Desch, VT: FTY, not the dynamics I’m used to from her, little bounce back.

Durante, UB: Nice extension on her Jaeger, floaty pak. Little stumble back on her dismount landing, but overall a hit.

Hambrick, UB: Big Ray as usual! Giant full, nice. Bail is good, but a little short on that final handstand. Half in half out, and a stick!

8:58pm: Childers, VT: Not a big block or really any height, but good distance. A little knees-y in the form and a teeny bounce back. Supposedly she’s training the Y1.5 but I don’t see it here.

Harrold, UB: Glad to see her back this week after being rested last week. Hecht mount to basically immediate Zuchold. Good Jaeger, that release is stressing me out tonight after two Kentucky girls missed it. Double front, tiny step back.

Edney, UB: Apparently tweaked her knee in warmups so that’s why she’s out of vault and floor. Hindorff is huge as always, bail is dead on. Nice final handstand, floaty DLO, straight as a rod in the air. College stick but she’ll still get the crown.

9:02pm: Dickson, VT: In for Graber after she landed lock-legged and sat her vault last week. Big hop back on her FTY, I guess no double?

Priessman, UB: Tkachev directly to pak, very whippy and a leg sep. Not one of her better ones. Snapped that final handstand into place though, very nice, and a perfectly stuck DLO! Nice!

9:04pm: Guerrero, VT: Y1.5, little step back to steady herself. Little knees in the air, but huge dynamics.

9:10pm: Rotation 3 is getting ready to start! Apparently Alabama had so much energy in warmups that they warmed up some of their bigger vaults and floor passes, but Dana has decided to keep it conservative tonight.

9:13pm: Macadaeg, BB: Switch to switch half, little bobble so she doesn’t go for the beat jump she usually has there. Bhs loso, dead on. Gainer full, good stick. Her split position on her switch leap is insane, though the switch half was short in the back leg.

9:14pm: Childers, FX: Full in to open, nice. Her bass is kinda throwing me off here in the beginning, but it’s a little better now. Second pass was a hit, I missed what it was. Rudi to back tuck to close, should’ve been a loso but she stayed on her feet.

9:18pm: Mahoney, FX: Double pike, nicely done. Front full front lay for her second pass, good. Nice positiosn on her leaps, and lands well. She is RIGHT on that line prepping for her last pass, wow. Double back to finish, good control.

9:21pm: Edney, BB: Commentators are talking about how she says “aggressive” to herself before she starts beam, and I can’t help but think of fire-breathing dragon from last season. Bhs loso, solid. A little shy on one of her split positions? Front toss, very strong. Stick on the dismount! Very nice.

9:23pm: Desch, FX: Double arabian, lands suuuuper low and almost sits it, but she pulls it up. 1.5 twist front half to split jump to front tuck, super fun marathon pass there. Double tuck to finish. Not her best, but a hit.

9:25pm: Desiderio, BB: Front aerial to sissone, nice. Bhs loso, a little off but covers well. Switch to switch half to beat, nice quick connections but maybe a little short on one of the splits. Gainer full, very nice. Love seeing her so confident in this lineup!

9:27pm: Armbrecht, FX: Double tuck to open, no DLO this week I guess. 1.5 twist to front lay for connection pass, nice. She has really nice turns, I don’t think I’d ever noticed that before. Rudi to finish, looks like she might have been supposed to connect out of it but her landing was funky, she covers well.

9:28pm: Campbell, BB: Gorgeous press handstand mount, very nice. Front aerial and misses her foot and falls, yikes. Gets back up, completes her bhs but it won’t count for a series. Does two back tucks in a row, hopefully they’ll count that connection and give her the series. Switch to switch half, good. A little short on dismount and hops forward, but good for her for finishing it out.

9:30pm: Guerrero, FX: Big double pike to open, no E pass for her this week. Great musicality in this dance segment. 1.5 twist to front full, nice. Here she goes with her hip hop sass, love the faces she’s giving to the camera. Rudi to finish, nicely done.

9:32pm: Finnegan, BB: Wolf turn, fine. Bhs loso, BIG bobble for Sarah but stays on. Switch to switch half, good. Side somi, another big bobble. What is it about tonight that’s putting people on edge? Side aerial to back full, good.

9:34pm: Winston, FX: Only the double pike tonight, but playing it safe I guess? Front layout to front full for her second pass. Double tuck to finish, good chest up on the landing. A solid routine for Kiwi.

After three rotations, LSU leads Bama 147.975 to 147.375. The lead shrinks a little, but it’s still a commanding lead, with home floor still to go. Alabama showing they can hit six routines on floor is good, though with the mishap with lead-off Childers can’t be ignored. Beam will be the final test, especially without Graber in the lineup, to see if they’re truly going back to the old Bama.

9:44pm: Ernst, BB: Bhs loso, nice. Switch to sheep, such a nice position on that. Little bobble there though. Roundoff double full, nice! Glad to see her in this lineup and succeeding with her new team.

Kirby, FX: Front lay to Rudi, a little wild but stays in. Double tuck for her second pass, good. For some reason, this routine doesn’t come across as engaging as it was in person last week? Weird. Front lay to front full for the final pass, good.

9:47pm: Desch, BB: Front aerial to beat jump, really elegant actually. Bhs loso, very nice. A little short on the second split in the back leg. Bhs bhs 1.5 twist, maybe a shuffle of the feet there.

9:49pm: Harrold, FX: aww her dad is here in the stands tonight! That’s so sweet. Front double full, a little crooked on the landing and has to cross over step. Double tuck for second pass, hard on the landing but she looks okay. Throws her head back on a switch leap but didn’t look like a ring position to me. 1.5 twist, tries to throw her punch front and can’t get it around, her foot slips and she just doesn’t have the momentum to land it. Finishes out but she’s in some pain, it looks like. Hope she’s okay.

9:52pm: Armbrecht, BB: Front aerial to beat, good. Bhs loso, a little uncertain but stays on. Split to sheep, not as nice as Ernst but fine. Round off 1.5 twist, little step.

9:53pm: Edwards, FX: I love her musical theatre routine! Front double full, lots of air on that and such a quick twister. Double tuck for her second pass, almost lands on one foot? Plants the other one behind her almost on a delay. Great choreography through this final section. 1.5 twist to front full for her final pass, good bounce back after a fall on that last pass last week.

9:55pm: Klopfer, BB: Her debut at Alabama! Wolf turn, a little sketchy but gets it around. Bhs loso I think, series was fine. Split to sheep, stumbles a little but stays on. Little step on her dismount.

9:57pm: Finnegan, FX: 1.5 twist to 2.5 twist, not perfect control on the landing but nothing big. Such great oversplits on her dance elements. Double tuck I think for her second pass? I missed it. And double pike to close, that should be a great score for her.

9:59pm: Winston, BB: Split elements nice. Front aerial, bobble. Normally that’s her series right there. Connects bhs to back pike/two foot layout-ish? Not sure what they’ll credit her with. Roundoff double tuck, little step on the landing. Good save for her.

10:00pm: Hambrick, FX: Super floaty DLO to open, one of the best I’ve seen her do, wow. 2.5 twist to punch front, super high on the twist and then travels far on the punch front. Almost lost control on her wolf full but covered well. Double pike to close, good landing position, and crowd goes nuts! And here come the 10 chants.

10:02pm: Guerrero, BB: Bhs loso loso, straight on. Switch to straddle, good. She works this beam so well, even away. Side aerial, solid. Roundoff 1.5 twist and stuck! Solid showing for the senior.

10:04pm: Cannamela, FX: Okay, moment of truth for LSU. Double pike to open, nice and high. 1.5 twist to front lay for her second pass. Weird loss of energy on her dance elements, that’s concerning. Double tuck to close, low but she stands it up, and that’ll clinch the win for the Tigers.

The PMAC erupts as LSU wins 197.45 to Alabama’s 196.725. This win is especially significant for the team as it’s their 30th consecutive win at home, it’s coach D-D Breaux’s birthday, and they broke their attendance record with a sold-out home meet and over 13,000 people in the arena.