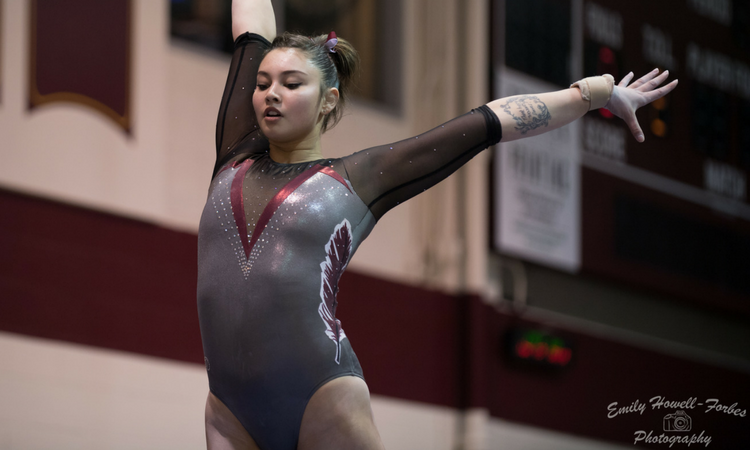 In an effort to give a little more coverage to DII and DIII teams each week, we decided to separate out the non-Division I meets to highlight some of the accomplishments, big scores and exciting wins. And this week, there were definitely some thrilling competitions. We break it down for you below.

TWU, the reining USAG national champion, opened its season at home with a win over Lindenwood by a margin of close to two points. Neither team was at its best in the opener, counting multiple falls, but both showed some nationally competitive scores from stars, as well as great promise from newcomers. TWU senior Schyler Jones was the standout of the meet, claiming four individual titles while sophomore Bria Northrop atypically competed only bars—it’s possible she is carrying a minor injury. Junior Mallory Moredock competed three events, including a very competitive 9.85 on floor and will hope to add bars to join the all around later the season.

The story for Lindenwood is similar. Senior Kierstin Sokolowski claimed the top mark for her team on all three of her events, including an event title on beam. Breanna Franklin debuted her new 10.0 vault, a front handspring pike half, for a 9.675 that will surely grow through the season. Sophomore Ryan Henry contributed hit scores on all three of her events, and Jordan Boogerd showed a strong 9.775 on vault. Unfortunately, the Lions had seven missed routines and had to count four of them, taking them out of contention for this meet. But they showed plenty of promise going into the second half of their two-meet weekend.

UC Davis notched an expected conference win over DII Seattle Pacific on Friday night, taking all four event titles. The Aggies didn’t perform as steadily as earlier in the week at the NorCal Classic, with some landing difficulties on vault and other technical errors costing the team about a point in deductions. But with such a young team—12 routines came from freshmen on Friday—it’s expected to have some growing pains, and Kelley Hebert and Kyla Kessler look every bit the future stars Davis needs them to be. Senior Brown also looked strong, narrowly missing out on the all around title after a deep landing on vault but showing some great innovation on floor to avoid stepping out of bounds.

The SPU Falcons opened their season at home with a score almost two points higher than the first meet in 2017 and, like the Aggies, gained some lineup options from a strong freshman class. McKenna Zimmermann and Haven Lanzador competed three events each, and Zimmermann also showed an exhibition routine on her fourth event, meaning the all around is within reach. Junior Itzia San Roman made her all around debut, joining the bars lineup for the first time in her career while sophomore Darian Burns competed the all around only a handful of times last season but showed four hit routines on Friday, including a stellar 9.8 on floor, allowing her to notch a career high in the all around.

Lindenwood, the defending MIC champion, took revenge for its mediocre Friday performance with a convincing win over conference rial SEMO on Monday. It became the first MIC team—and also the first DII/DIII team—to break the 194 mark in 2018. In fact, it was one hit routine away from a 195! It started the meet with a 48.925 on bars—a total that would be enviable for most DI teams. That rotation included three routines over 9.800, including a stunning 9.875 from freshman Courtney Mitchell. The Lions followed with consistent lineups on vault and floor, with every counted score between 9.7 and 9.8 in both cases and only counting a fall from senior Kierstin Sokolowski in the last routine. Despite that disappointment, this total is much closer to the Lindenwood fans are accustomed to seeing than the 191 from Friday. Excitingly, Sokolowski has been spotted training floor on social media. Lingering consequences of a knee injury kept her out of that lineup last year, but it would be a fitting end to her decorated career to return to the event in her last few months as a competitive gymnast.

SEMO’s mid-lineup routines let it down a little, but with a high 189 in its season opener followed by a 193.3 on Friday, the second meet’s score is  a respectable median. Freshman Lindsey Bates won the all around, as the only four-event competitor at the meet. Junior star Alexis Brawner also shone, with scores of 9.825 on vault and bars and 9.7 on floor, and McKinzie Jones scored a meet-best 9.85 on floor. Last season, it took SEMO six meets to break the 191 mark, so to do it on both the second and third attempts shows the potential for improvement this team has.

Perhaps the result of the weekend in DII news was Bridgeport’s shocking road upset of New Hampshire. The story of the meet may primarily have been an UNH meltdown on three events; it’s a team that is much more accustomed to scoring 194s than 191s, but nonetheless the Purple Knights stayed steady. The most exciting feature of the meet for Bridgeport was the breakout performance of Canadian freshman Kat Doran, who scored 9.825s on both bars and beam. Bridgeport always seems to have one gymnast who leads the team in both scores and aesthetics, and with Brianna Comport graduated, Doran might be the replacement it needs. Sophomore Kelsey Campbell also stood out, with four scores over 9.7 to finish with a competitive all around total of 39.0.

New Hampshire had a challenging meet, with a very uncharacteristic total of ten scores under 9.500. There were bright spots, though: Senior Casey Lauter continued to rank as one of the best beam gymnasts in the country with a 9.875, and freshman Lauren Diggan scored competitively in her two hit routines. Overall, though, it was one to forget (and drop from the RQS) for the Wildcats, and they’ll hope to recover next week on the road at Pitt.