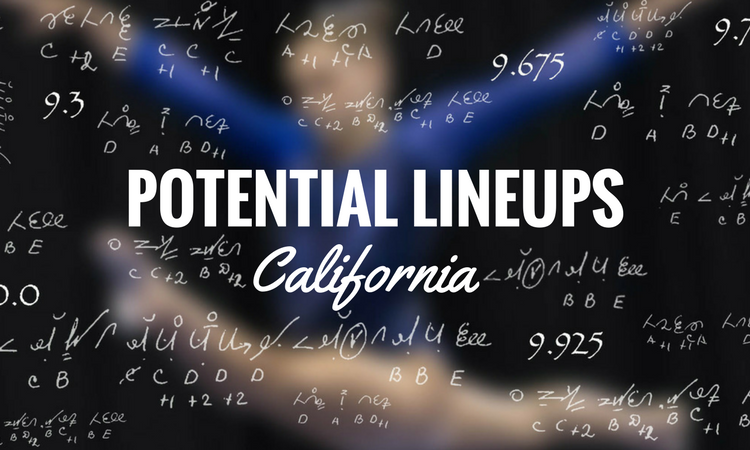 After coming up just shy of making nationals last season after a year riddled with injuries, California will look to make a triumphant return in 2018. Though it loses stars Zoe Draghi and Desiree Palomares, as well as work horses Charlie Owens, Emily Richardson and Amber Takara, Cal shouldn’t be in too bad of shape. It gains a valuable class of freshmen and should regain many of its veterans from injury, including senior star Toni-Ann Williams. Will the Bears be able to contend for a nationals berth again? Let’s take a closer look.

Vault at Cal was once a treasure trove of variety, with the Bears boasting the ability to field a full lineup of 10.0 start values. However, with some great vaulters graduating and others no longer competing their unique skills, this is no longer the case. The entire freshman class brings Yurchenko fulls, with some stronger than others. Kyana George is likely to be the strongest vaulter of her new class, with a dynamic full that has earned her excellent scores in club competition. Nina Schank also has a full with good leg form, but her landings can be deeper than desired on occasion. Maleah Pearson (not to be confused with Mariah Peterson, who is no longer on the roster) competed a full in the past, but we can’t find any competition footage since 2014, which makes it hard to justify her inclusion in the lineup.

With Williams returning from injury, it’s likely Cal will have two 10.0 starts returning to the lineup this season. Besides her Yurchenko one and a half, the Bears also have Arianna Robinson’s Ilg, a front handspring onto the board, handspring onto the table, pike off. Both have earned high scores in the past, so expect them to lead the way for this squad. Cassidy Keelen will also return from injury after an early setback kept her from shining. She’s capable of doing a Yurchenko double but stuck to the full in her first few meets in 2017. Still, her fulls were worth 9.8+ scores, so we wouldn’t fret about her chances as long as she’s healthy. Alicia Gallarzo has only competed a Yurchenko layout half, but her scores are no different than those with strong fulls. Because of this, she’s definitely a solid option for the lead-off position. Sylvie Seilnacht and Rachel Mastrangelo also had decent-scoring, relatively clean fulls, so they may make good early lineup or alternate options. Take a look below at who we consider to be Cal’s best vault lineup.

Bars is full of inconsistencies for the Bears, which might be why it was the team’s worst event in 2017, finishing the season ranked No. 27. Luckily, the incoming class has a few strong bar workers to help turn things around. Alma Kuc, a former international elite for Poland, has a gorgeous set with great rhythm and elegant lines. She occasionally has trouble hitting handstands, but with an easier set, she’ll likely mitigate that issue. Schank should also bring a competitive routine to the table, with a floaty Jaeger to overshoot combination and a difficult full-twisting double layout dismount. Don’t be surprised to see these two competing for late lineup slots, even as freshmen. Cal needs to take advantage of their scoring ability as best they can, so it’s likely they’ll go in the later spots to use score building to their benefit. There’s also George, whose bars aren’t her best but are still clean and consistent—and consistency is something her new team could really use. She’s definitely a solid choice, especially if Cal plans to use her in the all around. Pearson is another possibility, with an aggressive swing and clean technique. She, too, has trouble hitting handstands every time and her Tkachev doesn’t get a whole lot of height, but she’s a decent alternate option that can be called upon in a pinch.

Chelsea Shu and Yuleen Sternberg are expected to lead the way as far as returning competitors go. Both hit 9.9 in 2017 and had averages in the 9.8 range. Plus, neither had a fall all season. Gallarzo had the highest score on the event with a 9.925, but her inconsistency almost precludes her from a spot in the lineup, as she had as many falls as hits in eight appearances last season. Instead, we expect head coach Justin Howell to go with steadier choices like Williams, whose bars have never been stellar but can always get the job done, or Sofie Seilnacht, whose scores were steadily around 9.775 but with the potential to hit 9.875. Below you’ll find our proposed squad for the “#BearsonBars” in 2018.

Despite the fact that beam was tied for Cal’s best event last season—No. 16, the same as vault—its options seem quite limited. Consistency among the veterans is an issue, so it may be up to the newcomers to stabilize things. George and Schank are the two likeliest to contribute, as both had strong scores in J.O. George only had one miss in 2017, culminating in a 9.6 to win the bronze at level 10 nationals and topping out at 9.8(!). Schank had two misses in her final club season, but her long lines and patience with landings should bring her excellent scores in NCAA. Kuc and Pearson are also options, and while both have had some consistency issues, simplified sets and increased repetition are surefire ways to solve that problem. They’ll likely make good alternates, especially as they continue to progress in training.

Choosing a lineup lead is a tricky predicament for the Bears, considering nearly all of the returning beamers fell at some point last season. We’ve determined that Sofie Seilnacht is likely the best choice based on her consistency when she hits, as well as the fact that she only fell once and was able to bounce back the following week. Shu is also a possibility, though she didn’t compete much last year. After spending most of the season on the bench after a 9.575 in one of the first meets, she came back at the end of the season to score five straight 9.8+ scores, which may be a sign of better things to come. If she can pick up where she left off in 2017, the coming season should be a bright one. You can also fully expect Williams to be in the lineup, even if beam is her most inconsistent event. As a senior and team leader, we expect Williams to regularly be in the all around, even if she may not be the most natural on this particular event. In addition, Gallarzo and Keelen had promising scores last season, though neither competed enough to get a sense of their consistency. Gallarzo scored 9.9 or higher twice in seven routines, so even though she’s had some lower scores, she may be worth the risk. Keelen didn’t get much of a chance on the event before getting injured, but in club, she was a beam star. Here’s the rest of our proposed lineup for the Cal beam squad.

On floor, the Bears struggled a little without Williams, with only three other gymnasts capable of scoring 9.9 or higher, two of whom have now graduated. Williams and Robinson are expected to lead the way, but don’t be surprised to see some of the freshmen with big scores as well. George has a gorgeous, high double tuck, as well as a front double full. Plus, she’s a true performer that can engage the crowd with her choreography and personality. Schank may also end up in a late lineup position, bringing a dramatic performance and elegance to her routine. Her tumbling may not be the most difficult, but it’s clean and consistent, and that in itself may earn her a lineup berth. Pearson and Kuc again are also options, with Kuc showcasing her cleanliness and Pearson training a front double full in recent years, but with the strength of the rest of their teammates, they may end up as alternates for most of the season.

We already mentioned Williams and Robinson being the leaders of this lineup, both having scored 9.9+ last season and sporting E-level tumbling. Williams’ full-in is a given, and Robinson is training a front tuck through to double arabian that looks like it could be ready by season. Both Seilnacht sisters have contributed on the event in the past, though with questionable hit ratios. Sylvie was taken out of the lineup midseason while her sister was brought in for the last three meets of the year. But Sofie was the one who hit when it counted. Keelen is also a strong possibility, as her level 10 routine was excellent and also included an E pass. However, her three pre-injury routines were not inspiring. Here’s what we consider to be Cal’s best floor lineup.

It’s important to note that we’ve left Emi Watterson. A former elite, it’s unconfirmed whether Watterson plans to join in January or wait until the following season. In she arrives in time for 2018, we fully expect her to fit into the vault, bar and beam lineups. Victoria Salem is also absent from our lineups due to having torn both her meniscus and her ACL, according to her Instagram. In the event that she has a faster recovery than expected, bars would be her most likely event to contribute.

We’ve already discussed a few all around possibilities, with Williams and George the strongest candidates. Williams has been a top-10 all arounder in the past, though not since 2015, and in her senior year, she’ll likely look to repeat this accolade. George, on the other hand, is the fresh face that Cal will want to fill the massive holes the senior class will leave behind. Schank is also a possibility, particularly if Keelen isn’t 100 percent healthy, meaning Schank would slide into the vault lineup, putting her on all four.

Overall, Cal’s veteran options look a little sparse in some areas, but its newcomers should have the right mix of strengths to cover the team’s weaknesses. The Bears may be considered a bubble team, but can absolutely make nationals again if they peak at the right time.