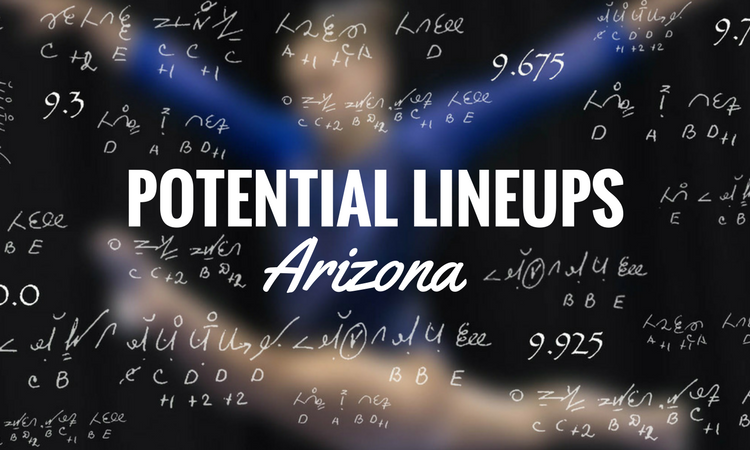 Returning to the Pac-12 this week, our next analysis focuses on the Arizona Wildcats, who are in for a rollercoaster of a preseason after losing their head coach Tabitha Yim to her new head coaching gig at Stanford. But this is a team we’ve seen overcome adversity and change before, and its new interim head coach has stood by it for quite some time, so don’t count Arizona out just yet. Losing seniors Selynna Felix-Terrazas, Krysten Howard and Gabby Laub, as well as Skyler Sheppard to transfer costs the team at least two routines on every event, which sounds bad on the surface, but the incoming freshmen bring routines that could potentially be even better than what Arizona is losing.

Vault has never been Arizona’s strong suit, with no one on the team scoring above 9.875 last season. The best person to remedy that situation in 2018 should be freshman Payton Bellows. Her Yurchenko one and a half will give the team its first 10.0 start value since the devaluation of the Yurchenko arabian, but it’s also just a downright beauty of a vault. Laura Leigh Horton has a strong full with nice height and distance, so as long as injury isn’t what kept her from competing this year in J.O., she should make a great addition to the lineup as well. Sydney Freidin and Adra Parks also have nice fulls, but both have no footage available from the last two years, so it’s hard to know what kind of shape they’re in currently.

The returning vaulters fall across a wide range of success. Heather Swanson and Madison Cindric have strong fulls that should continue to be workhorses for the team in leadership positions, especially now that Swanson has a full season under her belt. Lauryn Mattson competes a Yurchenko half that she’s never missed, scoring solidly in the 9.75-9.8 range last season, making her a good lead-off candidate. Jenny Leung was another frequent vaulter in 2017, though she had two or three big misses. A more consistent newcomer might be able to beat her out for her spot. Courtney Cowles only competed vault once in 2017, though it was a decent outing, and her J.O. work shows passable vault scores that could continue to translate well in college. Finally, Maddi Leydin was a promising recruit in 2017, but her mediocre scores don’t bode well for her future performance—not to mention the injury that took her out of contention halfway through 2017. If she’s anywhere close to top form again, she could still be a threat for a lineup berth.

All things considered, here’s how we’d set up vault for Arizona in 2018. 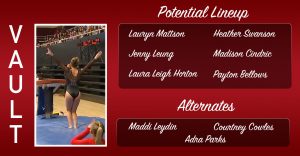 Bars was Arizona’s best event by far, finishing the season ranked No. 14 while all of their other event rankings were lower than No. 25. All three graduating seniors contributed strong routines to the lineup though, so without them, it may be hard to return to that high of a mark. Horton has a strong set with an easy swing, but her handstands can sometimes come up a little short. Bellows’ routine isn’t yet up to the competitive level necessary for college, but if she can add a single bar release or another D-level transition, she could break into the lineup. She has lovely lines and a huge dismount, so the foundation is definitely there. Freidin’s set is up to snuff as far as difficulty, but her leg form can get quite loose on all her releases. Of all the freshmen, though, Parks is probably the strongest, with a natural swing, tight form and great amplitude on her release skills. Despite the fact that we don’t have footage of a full routine since 2014, her more recent Instagram training videos show that she’s at least at the same level if not better than she was three years ago. She could definitely slide into a lineup spot if she can keep that up in college.

The GymCats’ returning bar workers are nothing to scoff at, though. Victoria Ortiz, the likely anchor, didn’t miss a bar routine all season and scored 9.9 or higher five times, topping out at 9.95. Hendrickson, Christina Berg and Danielle Spencer-Bearham were all also strong scorers, though with varying levels of consistency. Berg could use some work on her handstands, and Hendrickson’s dismount can get a little wild and whippy. Spencer-Bearham is gorgeous when she takes her time, but she needs to maintain that calm patience, otherwise she starts to miss. Kennady Schneider is also a good backup choice, showing solid 9.75-9.8 scores in 2016, though she only competed once last season and did not do as well. If she can get back up to her previous shape, she could even sneak into the main lineup if someone else isn’t capable.

Something to keep in mind is that Cindric has also competed bars on a few random occasions so she could compete in the all around. Though her performance in 2017 wouldn’t suggest it, her career high is actually a 9.925, which is huge for someone who doesn’t really consider bars to be her strong suit. She could definitely sneak in for a few weeks in postseason (as was her pattern in 2015-2016) if she’s up to it. Here’s how we’d stack the GymCats’ bar lineup with all the gymnasts in play. 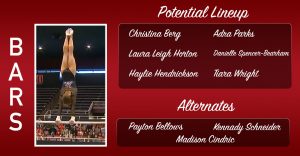 Beam was Arizona’s weakest event last season at rank No. 39. This wasn’t for a lack of talent but rather for a lack of inconsistency, with every lineup gymnast still on the team counting at least one fall. It’s time for a change to the GymCats’ beam, and that change could very well come in the form of a freshman. Freidin stands to enter college as the most consistent on the team. Yes, J.O. competitors don’t compete as often, but if you look at her last 10 meets, eight of those scores were 9.45 or higher, which typically translates to about a 9.85 in the NCAA. Going back 10 meets is going back two full years for Freidin, so the fact that she’s been that consistent over that long of a period of time shows promise for her future with Arizona. It might be risky, but she might, in fact, be Arizona’s best chance at a steady lead-off performer. Classmates Parks and Horton also have solid beam routines, though Parks again is hard to judge because her footage is so old.

Hopefully, the veterans can take Freidin’s lead and steady themselves a bit on beam. Cindric and Schneider were the most consistent of last season, with only one fall apiece, though Schneider was fairly unsteady in the first few weeks. Cindric is the highest scorer of the bunch, with a high of 9.925, and Schneider is always a huge crowd pleaser, packing her choreography with personality, even on beam. Ortiz might also make a good late-lineup performer, with a seasoned competitor’s air awareness and ability to think on her feet in order to prevent a larger mistake. Hendrickson and Cowles are also good options as far as scoring potential goes, though both had at least three misses in 2017. They’re going to want to prove that they can stay on the beam as much as possible, lest they lose out on their lineup spots to teammates who may prove to be steadier. Another name to keep in mind is Leung. She only competed beam twice in her freshman season, falling once, but her hit routine shows significant promise. She may become a good alternate if she can find that level of performance again.

With all this in mind, take a look below at who we think will make the beam squad for the GymCats. 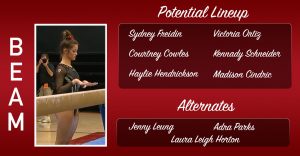 Floor at Arizona has also been rather inconsistent, occasionally having to count scores in the 9.6s after multiple misses in a meet. Then-senior Krysten Howard’s and Sheppard’s routines were some of the best of the bunch, though they too had their weaker outings. Sheppard’s departure also means the departure of the team’s only E pass with her triple twist. The best newcomer to potentially replace their scores is Bellows, who can slide fairly easily into Sheppard’s spot, replacing the E and likely stepping into a late lineup position, even as a freshman. Horton might also have a fighting chance, with basic but high tumbling and clean lines, though she could benefit from a dance passage that takes the emphasis off her short split positions.

The returning veterans bring a variety of styles to their floor routines, from dramatic and balletic routines to performances full of sass and attitude. Berg, though not an every-week contributor in 2017, has energy for days and strong but simple tumbling. Her dance could use a little work, with many of her jump positions rather indistinct. Pre-injury, Leydin seemed like she was starting to come into her own, creeping into the 9.7s and seeming more at home on the floor. If she’s back in action, she could definitely be a factor. Mattson has great musicality, with a solid sense of where her choreography should fit with her music, and some solid tumbling to match. She’s one of the more consistent scorers, with only one true miss all season, which could make her a good lead-off performer. Swanson actually started out as an alternate last season, but due to all the injuries her teammates sustained, she was thrust into the lineup last minute and was kind of forced to come into her own. She took to it well, though, peaking at a 9.85 in the later part of regular season. Cindric was the most consistent competitor of the season, hitting all five of the floor routines she competed in 2017 at 9.775 or higher. But it’s Schneider who’s really most likely to steal the show. As we mentioned in our Unsung Heroes of 2017 feature, Schneider choreographs her own routines, always packing them with personality and attitude, and has the power-packed tumbling to match. She scored a season high 9.925 last year—the highest of any returning GymCat on floor—making her a great choice for anchor.

Someone to keep in the back of your mind on floor is Leung. Though she didn’t compete floor last year, she was a strong vaulter, indicating that she may also have strong tumbling as well. From videos we found of her J.O. work, she could very well slide into an early lineup slot on the event, especially should another veteran not be ready or need a rest on any given week. She’s a dark horse, but we’re optimistic about her chances. That being said, here’s how we’d put together the floor lineup for Arizona this year. 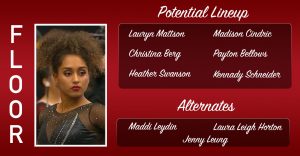 With the lineups the way they currently stand, Arizona is left without an all around contender, which isn’t a surprise as it has not been an all arounder-type of team in the past. The most likely choice would be Cindric, who stands to compete in the second half of the lineup on three of the four events and serves as an alternate for the fourth. She’s competed all four in every season so far, so it stands to reason she’ll likely go for it again, even if only a few times. Other than that, the only other gymnast that might compete all four is Horton, but she’d have some significant cleaning up to do in order to join the main lineups for beam or floor.

Check back soon for our analysis of Iowa State! And to see all the posts in the potential lineups series, click here.