By Emily Howell-Forbes and Tara Graeve 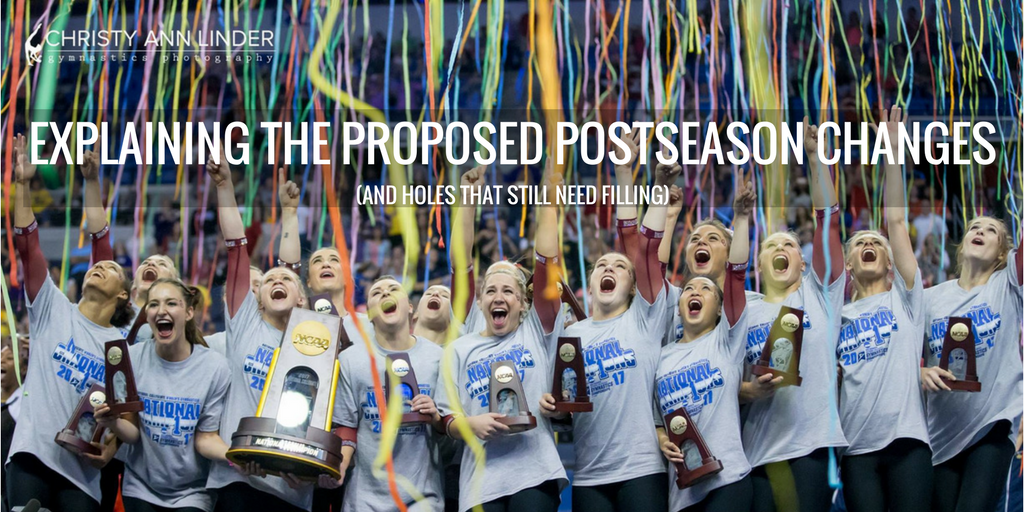 The NCAA Women’s Gymnastics Committee has released a report detailing proposed postseason format changes. The changes still have to be approved by the Division I Competition Oversight Committee, so they are not completely official yet. However, if approved, they will go into effect for the 2019 season. There are a lot of things that we love about the proposal but also a few problems and questions we still have.
Each Host Site gets Three Days of Meets
Friday: Play-In
Teams ranked 29-36 will compete in dual meets, one meet at each of the four regional host sites, the Friday before the regional with the winning team advancing to the regional.

Saturday: Afternoon and Evening Regional Sessions
Eight teams, including the winner of the Friday play-in meet, compete to advance to the super regional on Sunday. Teams compete in two sessions, four teams each, with the top two from each session advancing to the super regional.

Along with the logistical things we like about this format, it’s also a positive for the host sites. Giving them a chance to draw more interest to the sport and also bring in more money in exchange for hosting a regional meet.

Dual Meet Play-Ins
This is one of our favorite adaptations to the previously proposed format. Instead of one meet with five teams where only one advances into the No. 32 spot, there will be a dual meet at each site the Friday before the regional with the winner of that meet advancing to the regional the next day. These No. 32 to No. 36-ranked teams are often close in talent and skill level, making more exciting gymnastics to watch. You won’t catch us complaining about more gymnastics. But making the additional gymnastics high-stakes? Sign us up.

Four on the Floor
This is another favorite of ours. The proposed new format eliminates the byes that come with the current six-team meets. Not only is it more TV friendly, but it also shortens the duration of meets. The shortened length should be beneficial to the student-athletes as well as fans. Plus, it’ll now be easier to track which team is on which event, since we won’t have to keep track of byes and all teams have competed the same number of events (no more confusing averages rather than totals after each rotation). The entire meet will be action packed and have the possibility of going down to the last two routines, rather than having the leading team potentially be on a bye.

Individual Qualifiers
Although we are disappointed that less individual all arounders will qualify to nationals, we love that the proposed new format makes it easier for individual event specialists to advance. Rather than having to win the event like under the current format, the top individual on each event and top all arounder not on a qualifying team will advance. This means that eight individuals will advance from regionals to super regionals and four from super regionals to regionals. We already know we’re going to love seeing more deserving event specialists get their chance to shine on the national stage. Imagine if we had gotten to see Stacie Webb on beam or Kirah Koshinski on floor at nationals!

While all of the above things are great, and we are all more than little excited to watch this new format, there are still a few problems that remain unsolved.

Some Teams and Individuals will Compete More
Teams ranked No. 29 to No. 36 and individuals from those teams, if they manage to advance to the super regional competition, will be competing three times as opposed to twice for other teams and individuals.

While it’s not likely those lower-ranked teams will advance to super regionals, it’s still a slight disadvantage should we have a situation like in 2017 where Stanford came into the postseason at No. 32. It’s more an issue for the star individual competitors on play-in teams if they advance all the way through to super regionals. It raises some questions about burnout or fatigue occurring, particularly on that third day.

Individuals from the Losing Play-In Team
As far as we can tell, there isn’t a system in place for individuals on the losing team from the play-in round to advance through as an individual competitor for AA or as an event specialist. Hopefully this gets fixed before everything is finalized, as it seems like a “Larisa Iordache not making the Olympic despite getting a world bronze medal” situation.

This could be as simple as just sending through the top AA gymnast and top gymnast on each event from that losing team. Or perhaps it will be determined before the meets even begin the way the individuals on teams ranked lower than No. 36 will qualify.

Individual Title Awards at Regionals and Nationals
This is not a new issue by any means but has not been addressed by the changes. We still have the ongoing issue with the lack of any kind of tie-break system when gymnasts have received the same score on an event. This isn’t a huge issue with a two-way tie. But when we are getting six-way ties on events, it becomes a little ridiculous.

There are multiple ways that a tie break system could be implemented, but the other option would be to align scoring with the J.O. system where there is a much wider range of scores and huge ties are less of a problem. Or, you know, judges could simply do their jobs and take the deductions they’re supposed to be taking…

Lack of Championship Team Diversity
At least for a couple years, as the lower-tiered teams continue to build, we may see mostly the same teams at nationals every year. With only eight teams qualifying rather than 12, it leaves far less chances for that random outlier team to make it in.

How Do I Possibly Watch All These Meets?!
Regional weekend is already crazy, and it becomes an organizational and attentional challenge to watch every meet (if you’re into that sort of thing). Now with three days of meets and two sessions on Saturday, it may be causing a few panic attacks trying to imagine tracking it.

Options considered have included: buying three TVs and lining them up next to each other while watching the fourth meet on a laptop, four way split screening a laptop or trying to flip between meets which results in curling up in a ball and giving up forever.

On a slightly more reasonable note, since these regionals are being formatted to be more TV friendly, it is very likely they will be aired by major networks and thus be rewatchable after the fact.

The bottom line? Go ahead and book your schedules for some seriously gymnastics-filled weekends now. 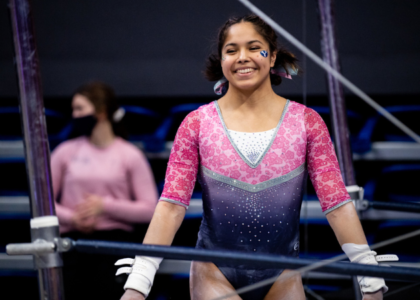