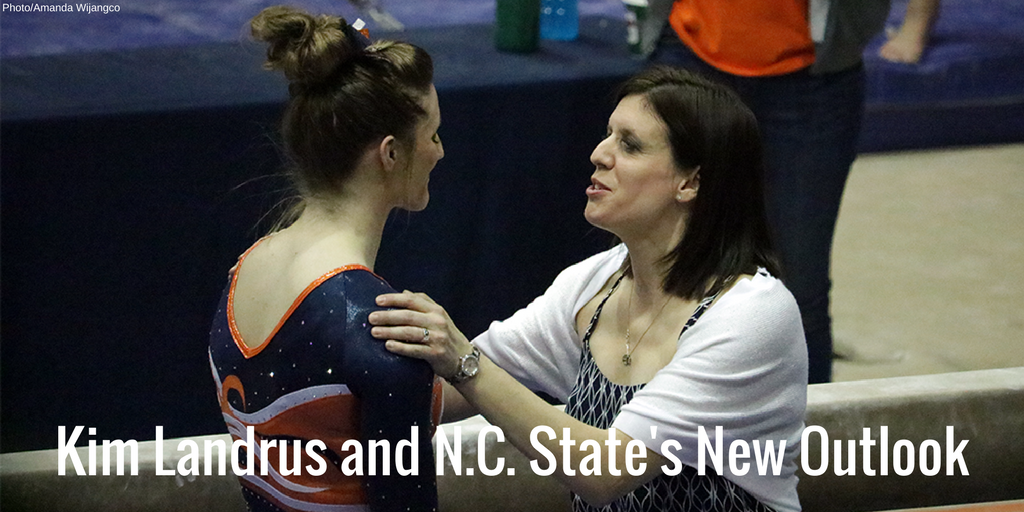 The 2017 offseason has been anything but dull in the world of women’s gymnastics. With a record 10 coaching changes (Alaska has recently announced the retirement of the program’s only head coach and Utah State has an opening now that Nadalie Walsh filled the spot at Illinois), some head coach openings—and departures—have left gym fans with more questions than answers. One of the more positive coaching changes for the upcoming 2017-2018 season is the addition of Kim Landrus as head coach of the N.C. State. Landrus, who comes in after 8 years as the head coach of Illinois, will be taking over for Mark Stevenson following the announcement of his retirement. Landrus has served as head coach for the Illini since 2011 and held associate head coach and assistant coach positions at the program in some capacity since 2002. Furthering an already stellar resume, Landrus herself was an accomplished gymnast at Iowa State.

A History of Landrus & Illinois
As a program, Illinois flourished under Landrus’ tenure as head coach—she has produced 12 All-Americans, eight regular season All-Americans, and made it to three national championships. In 2015, the team boasted a score that broke the program record with a 197.350. The following year showed equal success on beam, an event Landrus excels at coaching and is in fact the Illini’s best event, with a school record of 49.425. In addition, Landrus has been awarded Head Coach of the Year for the South Central regional (2015) and Assistant Coach of the Year (2005). 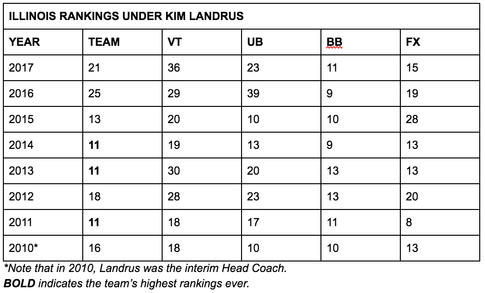 While Illinois wasn’t exactly a struggling team prior to Landrus’ reign as head coach, it kept a position in the lower-ranked 20s and sometimes found itself in the 30s and 40s. Bumping up Landrus from an assistant to the leader of the pack bolstered the status of Illinois in the sport. Landrus brought out the best of the program and showed fans—and other teams—what Illinois can offer. Since 2010, Illinois has yet to fall out of the top 25 and the Landrus years brought the three highest finishes in school history (2011, 2013, 2014). Landrus made Illinois a name in women’s gymnastics and the athletes she’s coached or recruited have made their mark: among the most accomplished are Lizzy LeDuc, Alina Weinstein, Sunny Kato and Mary Jane Horth.

A look at these rankings show that Landrus has brought out more consistency for Illinois than previous years, despite the admittedly large dip in the standings between 2015 to 2017. Even so, the Illini’s best event, beam, hasn’t ranked below No. 13. And floor also seems to be on an upward trend, actually having a higher placement at one point than the more consistently ranked beam (8th in 2011, Landrus’ first official year as head coach).
Landrus made a mark for Illinois. She’s recruited and coached top athletes in the sport and Illinois can absolutely be seen as a spoiler during close meets. Whether the tradition continues remains to be seen, but for now it’s all about Landrus’ new home in Raleigh, North Carolina, coaching a team with its own strong history, as well as what expertise the former Illini can bring to the Wolfpack.

Stevenson & Building the Pack
N.C. State is part of the small but growing-in-recognition EAGL conference. As of late, George Washington has been gaining traction in the EAGL, but that doesn’t mean NCSU’s program is anything to scoff at. Stevenson has been the only coach heading the Wolfpack since he started the program in 1980. Like Landrus, his resume with the team is sparkling: As a coach he has been awarded EAGL Coach of the Year and NCAA Regional Coach of the Year a combined 10 times and lead the Pack not only to winning conference championships but 27 postseason appearances (NCSU has only been to nationals once and boasted the same ranking as Illinois, 11th). Stevenson has also coached stellar gymnasts: Maggie Haney (former coach of Olympian Laurie Hernandez) and Monica Berry, who in 1999 became the first Pack gymnasts to score a perfect 10. 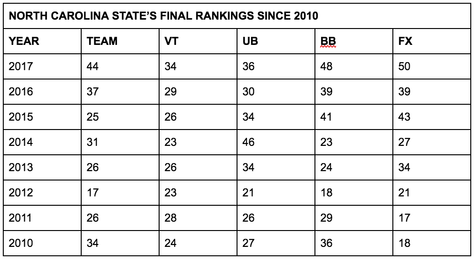 Even with its program ranked lower than Illinois, the excellence of many of NCSU’s gymnasts should be noted. Along with rising senior Chelsea Knight, the Pack also has Alexa and Paris Phillips and Nicole Wild, most who have been individual qualifiers in regionals and/or are mainstays in the lineups. But rankings and scores are an important part for the postseason in women’s gymnastics. NCSU has qualified for regionals six of the last 8 years (and only once in those 6 years has it been in the more coveted seeded spots for regionals). Plus, between the 2016 and 2017 seasons all five of its final rankings have dropped significantly. The team hasn’t been in the top 18 since 2012. Compared to Illinois, N.C. State is much less consistent than it could be, especially with the talent it has.

Kim Landrus & the New North Carolina State
Keeping all of this in mind, how can Kim Landrus help the Pack?

Consistency: While the Illini dropped in the rankings significantly in 2015 and 2016, they came back fighting in 2017 to inch up to No. 21. That drop has been the only inconsistency Illinois has had since Landrus took over. She’s kept the team safe in the regionals berth bubble with the past two years being the only time the team hasn’t landed a seeded spot. Looking at Illinois’ scores, you can see a clear trajectory—more than likely, its going to make regionals, with a good chance of a seed. Meanwhile, N.C. State’s final rankings have been less than stellar for what they could be. It’s more of a toss up whether the team will extend its season to regionals or not. Landrus is going to want to push N.C. State out of the 40s’ slump it’s gotten into and get its consistency into frequent (read: hopefully yearly) regionals berths. Landrus will look to make N.C. State seen as Illinois is seen now: a team you expect to be in the mix for regionals and even nationals.

Higher Rankings: You can’t talk about a team needing to build better consistency without talking about one of the biggest reasons why—high team rankings. Higher-ranked teams aren’t just crucial to boost morale, sign future recruits or make the school’s athletic department look good. For gymnastics, the difference between being ranked 18th and being ranked 19th are monumental (same for being ranked 36th and 37th). Landrus will want to push N.C. State out of missing regionals to constant appearances. While the end goal is most likely to at least fight for a spot at nationals, they can’t get there when they flip between No. 25 and No. 44 every other year. While having individual athletes qualify for regionals or nationals is something to take pride in, NCAA gymnastics is big on team pride; everything is about the team. The team is going to want regionals glory and soon.

Better Apparatus Recognition: This subject is definitely less important than consistency and higher rankings. The final RQS score teams get that determine a trip to regionals is based on the final team score, not when one apparatus happens to be more outstanding than others. That being said, N.C. State isn’t really known for excelling at a particular apparatus like some other teams are (if we say bars, we may think of Oklahoma or if we say floor we automatically think LSU). Looking at Illinois’ ranking, beam scores actually beat some higher-ranked teams (Boise State, Kentucky and Georgia) and surely played a part in why Illinois has been so successful. For the past 3 years, beam has been the Pack’s weakest event. Landrus’ expertise on the apparatus will absolutely be an asset for a team that struggles with it.
No one can predict how N.C. State will fare with a new coach at the helm, especially with only its second coach ever. If her track record is anything to go by, Landrus’ appointment should do wonders for N.C. State’s future in the sport. Though it may not happen overnight, Landrus will build athletes, and the program, for better consistency and performances throughout 2018 and potentially put pressure on reigning EAGL champs George Washington. N.C. State has the athletes to move up to regionals and move to more preferable seeding positions. Landrus, as the leader and motivator, needs to rethink the strategy to get them to that sweet spot.