By Elizabeth Grimsley and Christina Marmet 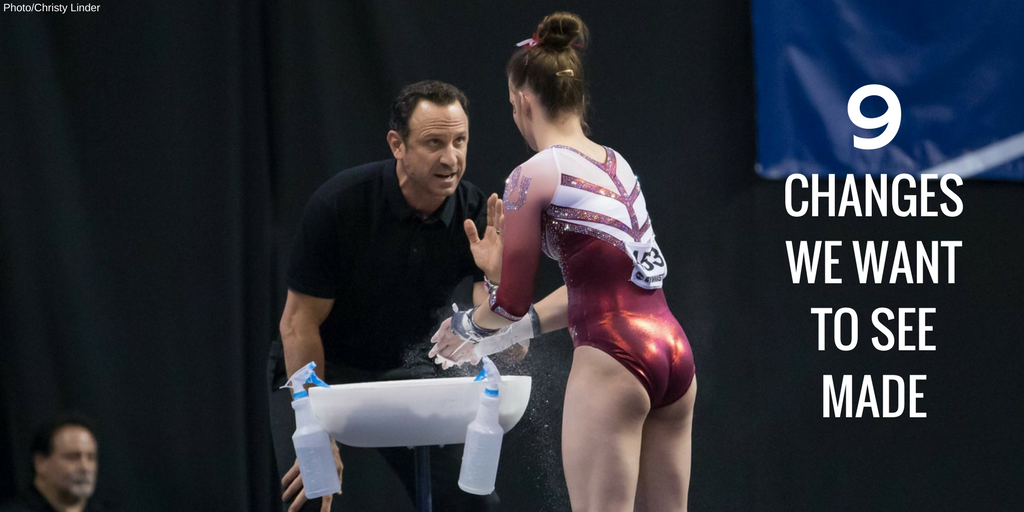 NCAA gymnastics is a sport filled with rules we love to hate. But rather than complaining about them all the time on social media, we decided to type them out and complain about them here instead! While these are just a few of the things we’d like to be changed in the coming years, there are plenty of others we don’t mention. Which did we leave out? What do you want to see happen in the future for collegiate gymnastics? Let us know in the comments or on social media.​

Bring Back Event Finals
The general consensus when event finals were eliminated was total outrage (or so we like to think). But in all seriousness, event finals were the fun, bring-you-back-down-to-earth competition after an exciting night of team finals. These past two years, it’s seemed like a big let down on Sunday when there’s no gymnastics and there won’t be any more gymnastics for a good 200+ days. But not only that, event finals were a chance to not only get to see a difficult skill thrown every so often but it also gave those individuals from  lesser-known teams a chance to have their moment in the spotlight. How many of you, besides the ultra-obsessive, remember a without-a-team competitor’s routines from nationals this year? They blend in during prelims and, unless they’re Nina Magee on floor, barely get any attention despite accomplishing the difficult feat of making nationals without a team.

Four on the Floor Finals
From what we have seen on Twitter so far, it appears coaches are seriously considering getting rid of byes at nationals. About damn time! While having six teams is fun and our feelings are a little less hurt because more gymnastics, byes just slow the entire competition down and can get confusing for the regular viewers. We want a fast-paced, tense meet with no pauses for anybody and one that will come down to the last routine with everybody on the floor. While there had been progress over the last few years with the draw made so the top four teams from prelims are on the floor in the last rotation, we still want to get rid of byes entirely. The probability of a team that placed fifth or sixth in prelim winning the title is low anyway—it hasn’t happened since at least 2009, according to Road to Nationals. And no, the argument of “then only the same teams are going to win year after year” is not valid anymore. The time of the “Big Four” is over, the parity has increased tremendously over the last few seasons and it really could be anybody’s game to qualify to finals and win the whole thing.

Regular Season Ranking Sends Individuals to Nationals
The way individual make nationals right now is not great, to be honest. Not only do many of the best gymnasts on each event rarely end up making it, random competitors advance (which is fine but, as we said, random). Besides the “regular season All-American” honor, what do those gymnasts get for being phenomenal all season long on an event but aren’t from a top team? Eastern Michigan’s Kendall Valentin sat in the top 10 on bars for the majority of the 2017 season but had to beat the likes of Kyla Ross, Peng-Peng Lee and Kaytianna McMillan on bars with one routine and coming from a “lesser-name” team. Does that make sense to you?

We think individual should qualify to nationals based off regular season results. Sure, this would mean we would know at least some of the competitors ahead of the postseason and that teams like Florida or Oklahoma would already know if some of their gymnasts would be competing at NCAAs. But… Why does that matter? What’s so wrong with doing it this way?

Conference Championships Back to School Hosts
We were recently rewatching older NCAA competitions back when conference championships and nationals were held at schools and the atmosphere was SO electric. While the competitions as of late have been pretty good, they’re no Georgia 2008, with the student section screaming its head off, rowdy fans in the stands and emotions on an all-time high. Now, we understand that many of these schools can’t fit a podium in their usual arenas, which is why we’re only proposing moving conference champs back for now. Yes it’s good practice for nationals and creates a more official feel to the meet, but wouldn’t you rather have more fans and a better environment than compete on the podium?

It also brings up the point of biased scoring, which takes us to our next point…

Judges Actually Do Their Jobs
We Understand that judges are human and can’t see everything. But these past few seasons, the scoring has gotten out of control. We are all for perfect 10s and lots of them, but when a gymnast CLEARLY hops on a landing or misses a handstand? Use common sense and don’t give it a 10. Let’s be reasonable. It’s not even a push toward stricter judging. If judges just took the deductions they were supposed to take in the first place, scores would be more realistic, less biased toward the home team and big names, individual routines would be separated a bit more and great routines would be elevated above average ones.

Throwback Leo Meet Held in Conjunction With Alumni Night
We’ve been saying for years that teams should wear throwback leos during alumni night, so when TWU wore its crushed velvet beauty at one meet in 2017, we SCREAMED in delight. Maybe it’s not possible to wear the exact leos because of sizing or old elastic or what have you. But why not have one of the many, many new leos a team gets in a season be a recreation of an older style?

Senior Gala to Wrap Up Nationals
Seriously, how many times did it hit you this season once the meet was over: “Wait, this was her last routine ever?!” It hurts, right? To know you’ll never see them again and that you totally did not realize at the time it was the LAST routine, especially in the midst of the prelims craze at nationals. And don’t get us started on those teams that narrowly miss out on a Super Six berth and the last routines come even more unexpectedly. A fun gala after the competition is over would be the opportunity for our favorite seniors to give us their last hoorah before they retire. For all we care, they can just do backward rolls and a L6 floor routine to ridiculous music, but at least we would get to properly say our goodbyes. Totally selfish, we know, but at least all the seniors would be able to finish off their career on a fun, spunky note and by being the center of attention.

Potential Lineups Posted in All Pre-Meet Notes
What’s the harm? Most teams that do it already pretty much just use the previous meet’s lineups anyway. Why not give the fans a little bit of information in a sport where coaches are so unwilling to divulge anything.

More Transparency With Interviews
Raise your hand if you’re SO TIRED of interviews that you probably could have recited before the coach even started talking. *Everyone raises hand.* But seriously? You wanted to hit four for four? No kidding. That’s like the old journalism saying about the headline that goes ‘Dog Bites Man’ isn’t newsworthy, but ‘Man Bites Dog’ is definitely going on the front page.”