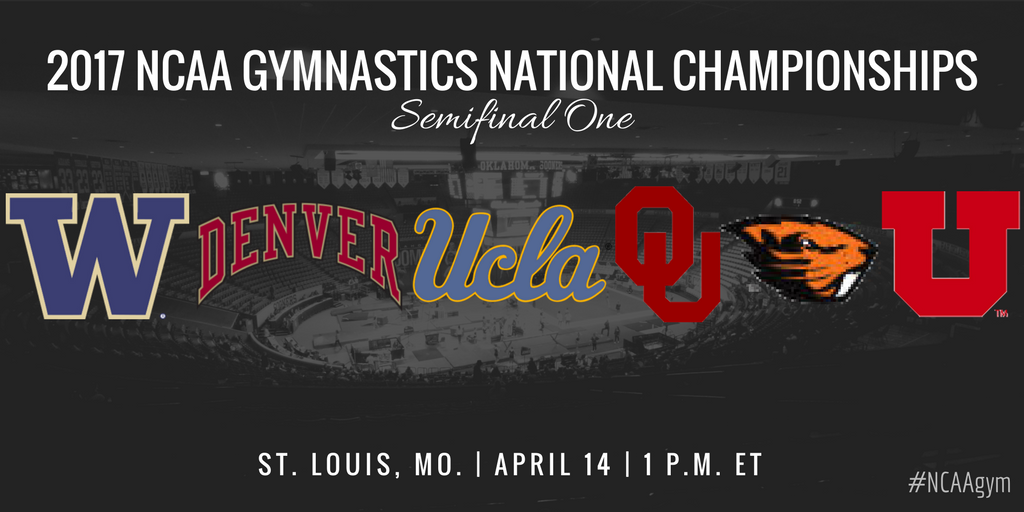 At first glance, one might think this subdivision will be a walk in the park for Oklahoma, Utah and UCLA. While these three are coming in as the favorites to advance, we are also facing a subdivision with a high potential for upset and no team (other than Oklahoma, let’s be real) should considered itself as an absolute lock to make Super Six. As a reminder, the best three teams from each subdivision will advance to Super Six. Here, we basically have a repeat of the evening session of the Pac-12 championship with Utah, UCLA, Washington and Oregon State, along with the best two teams of the Big 12 conference, Oklahoma and Denver. We have already witnessed UCLA being challenged by Oregon State and Washington at Pac-12s, while Utah was distanced by Denver halfway through last week’s regionals. Anything is possible here, and none but Oklahoma have the luxury of giving an average performance here and hope to advance.

We know that nothing is certain in the sport of gymnastics, but it would take quite the meltdown for the Sooners not to advance to Super Six and defend their title. As expected, they cruised through regionals and recorded the highest score across all teams with a 198.075. This also marked the fifth time this season that Oklahoma went above a 198. To really start worrying, the Sooners would have to count two falls, but it would be a shocker if that happened to them. They finally gave us the vault landings we had been wanting from them all season at regionals, and they will need to continue that streak of sticking, especially in the Super Six. Maggie Nichols finally made her return to the all-around at regionals, so keep an eye out for her scores there as she’s in the hunt for the national title, but that’s a discussion for another time.

As previously mentioned, which two teams will accompany the Sooners to the Super Six isn’t clear-cut. The Utes can be considered somewhat of a lock, but also let’s not forget last year’s beam rotation where they essentially imploded after being favorites to make Super Six. Although I’m sure Utah would rather never think of that ever again. That said, the Utes haven’t had the same beam struggles as last season, and they should feel confident going into this subdivision. They ended up winning their regionals, but that wasn’t without giving us a scare after a weak start on bars and beam and giving up the lead to Denver. Unlike Oklahoma, Utah doesn’t have the luxury of counting a fall or even absorbing poor routines with three teams with strong upset potentials. The Utes will need to be at their best on bars and beam, as they usually get distanced there by UCLA, and also just got beaten by Denver at regionals on these events. However, they are coming in with the confidence that they have already defeated their Pac-12 counterparts during the regular season and once again at the championship meet. The status of Kari Lee remains uncertain, as she tweaked her ankle and was only able to do bars at regionals, but Utah has shown depth with the input of McNatt on beam and Muhaw on vault. However, having Lee back on all four would give the Utes a bit more of a cushion and a few extra tenths that might prove helpful. All in all, Utah should be confident but it will need to be the Pac-12s team, and not the scrappy Georgia meet team that scored a mid 196 if it hopes to advance to Saturday’s finals.

​UCLA should make it to the Super Six with the roster it has and from looking at the numbers, but it will really depend on which team shows up that day. Will it be Pac-12 team that let itself get distanced by Utah and Oregon State and tied by Washington, or will it be the 198.125 team? It better be the latter if the Bruins want to compete for that 2017 national title. Just like Utah, the Bruins are not safe from an upset, especially coming in with only the fourth best regionals score in this subdivision. Unlike Utah, UCLA should be worried about being back against its Pac-12 competitors. The Bruins will start on a bye before bars, and bars will likely be the deciding event for the Bruins. They had a poor showing there at Pac-12s with too many uncharacteristic and costly mistakes, yet it was their highest scoring event at regionals while beam was a wobble-fest.  The Bruins cannot afford a bunch of 9.7s or falls to stay in the race, and they will need to put up four strong events. The vault lineup this season didn’t turn out what we thought it would be with its plethora of 10.0 vaults we saw on the pre-season training updates, so the Bruins have got to be sticking their Yurchenko fulls to stay competitive. Overall, it shouldn’t be such a rollercoaster of emotions watching UCLA with the level of talent it has, yet here we are. We won’t rest easy until the Bruins have gone through all four events, as you never know which one might give them trouble. Finally, we learned earlier this week that Katelyn Ohashi rolled her ankle in practice and that they were waiting for a diagnostic, so let’s keep an eye out for any updates on that situation.

Looking at regionals score, Denver is coming in this subdivision as the third best team. The Pioneers are one of the ‘Cinderella’ stories of this season along with Washington, and it has been thrilling to see them return to nationals for the first time since 2008. They put up an impressive performance at regionals, staying with Utah routine for routine and leading the meet at the halfway point. They had no rotation under a 49.200, and a repeat of that performance definitely could send them to Super Six. Denver will start on beam, where it will need to dial down the adrenaline and control the nerves, but it will finish on its two strongest events as a result. The Pioneers’ season high score remains a low 197.150, so they will need to not only replicate their regionals performance and more, but also hope for some help from the three teams above for a realistic shot at Super Six.

Oregon State is another team very much capable of making Super Six on its better days. It will be a challenge for the Beavers to qualify and will depend on UCLA and Utah to have one of their average days, but it’s possible and they should not be overlooked. They already know they are capable of upsetting UCLA and Washington, and of coming close to Utah. However, they will need to put up a better performance than at regionals where they essentially gave us all a heart attack after a poor bars showing, and weak vault and floor rotations. Vault will be key for the Beavers to pull ahead especially of UCLA, but they will need to replicate the landings we saw at Pac-12s. They will end on beam, their strongest event and one where they might be able to take advantage of a situation where Utah or UCLA would be within reach.

Rounding out this subdivision is Washington, which qualified to NCAAs for the first time since 1998. The Huskies have looked consistent and sharp all season, tied UCLA for third at Pac-12s, and upset Kentucky at home to grab this coveted nationals spot. They will start on their best events bars and beam, and they will definitely need to set the bar high from the get go. However, beam will have to be sharper and more solid than at regionals, where they only scored a 49.175 while they have an RQS of 49.300 on the event. Realistically, it will be more difficult for the Huskies to challenge for a spot in the Super Six if everybody else competes at their best, but it’s still very much within reach, especially if we start seeing weaker performances from the rest. With its season high of 197.175, Washington will need to be both on top of its game and to hope for other teams to be mediocre to reach Saturday’s finals.

Are you playing the 2017 NCAA Gym Bracket Challenge? Check up on how you’re doing here. Want to receive the latest collegiate gymnastics news in your inbox? Sign up for the NCAA Gym NewsLetter here.
Facebook0Tweet0Pin0