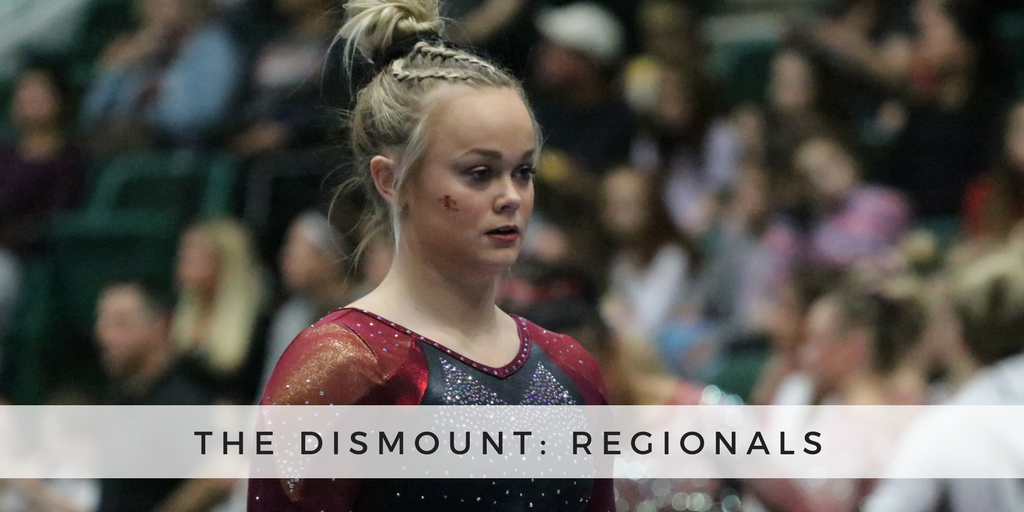 It was a somewhat straightforward day of regional competition with only a bit of drama as Nebraska and Washington overcame their No. 3-seed and booked their trips to nationals. Aside from finding out which teams and individuals will make their way to St. Louis, we also now know which semifinals will feature which teams. The afternoon session will include Oklahoma, Washington, Utah, Denver, UCLA and Oregon State while the evening session will have Florida, Georgia, Alabama, Michigan, LSU and Nebraska.

Are you playing the 2017 NCAA Gym Bracket Challenge? Check up on how you’re doing here.

Full Results | Utah: 197.150 | DU: 197.050 | AU: 196.600 | Ark: 196.600 | Cal: 196.300 | CMU: 195.675
VT: Speed, Fielitz, Skinner, Pedrick 9.900 | UB: Cerio, Chesnok 9.925 | BB: Palomares, Clements, McNatt, Karr 9.900 | FX: Skinner 9.950 | AA: Skinner 39.525
Nationals Qualifiers: Utah, Denver, Becker (AA, AU), Yamzon (AA, Arkansas), Speed (VT, Arkansas), Pedrick (VT, CMU), Cerio (UB, AU), Palomares (BB, Cal), Clements (BB, CMU)
home crowd and to put up a complete performance after the disappointment from the SEC Championship to close out their season. Arkansas will send two individuals to nationals too, with Braie Speed for vault and Jessica Yamzon for the all around. California recorded its highest regional score ever despite finishing fifth here, proving once again the competitiveness of this meet. Despite its variety of 10.0 vaults, the Bears fell behind on that event and were unable to go above the 49 mark. They closed out the competition strong on beam, but it was not enough to catch up with Auburn and Arkansas. Desiree Palomares became Cal’s first ever regional beam champion and will represent Cal in St. Louis. Finally, Central Michigan placed sixth with a 195.675 but will send two individuals to nationals. Katy Clements won a share of the balance beam title, while Denelle Pedrick shared the vault title with a 9.900 after casually throwing a double full for the first time in competition. Like one does at regionals. Consequently, each of the non qualified teams will be sending a few individuals to nationals, a feat quite hard to achieve and rarely seen, if ever.

While the Gators and the Tigers went back and forth in the first half of the meet, Georgia just did its own thing. With the advantage of going in Olympic order, the Gymdogs scored their highest road vault total of the season, a 49.325. Sydney Snead essentially stuck her Yurchenko 1.5 to set the bar high for any hopeful vault qualifiers at a 9.95. After their bye, the Dogs were a little more tight, especially after a fall from Lauren Johnson. However, in her one event of the night, freshman Rachel Dickson came back to score a 9.9, the team’s highest score on the event. Beam started out well, but they had to count a few lower scores in the first half of the rotation because Vivi Babalis scored just a 9.625, because she had a bobble after her front aerial and had to repeat it to get credit for her series. Floor bounced back though, with the Gymdogs able to count all scores over 9.8. Penn State had a triumphant night after a rollercoaster season, qualifying both Sabrina Garcia and Briannah Tsang to nationals as all arounders. While the Lions made mistakes on each event, the gymnasts had each other’s backs, as they were able to avoid counting any falls all night. North Carolina had a phenomenal night, but in their final rotation, their best hope of having a representative at nationals was dashed as Morgan Lane fell on her beam series. Up to that point, she had a great night, scoring a team-high 9.85 on floor and totally nailing her Yurchenko full-on back pike on vault. New Hampshire had quite a rollercoaster of a night, with different gymnasts having misses just when they started to build some momentum. They still managed not to count any falls, and should definitely be proud to have been at regionals. Also worth noting was Chelsea Knight of North Carolina State, who had a stellar night and benefited from rotating with Florida, coming just one tenth shy of qualifying to nationals!

Full Results | OU: 198.075 | UW: 196.550 | UK: 196.200 | Stan: 195.575 | BYU: 195.025 | USU: 194.850
VT: Nichols, Jackson 9.950 | UB: Price 9.975 | BB: Capps, Nichols 9.975 | FX: Nichols 9.950 | AA: Nichols 39.750
Nationals Qualifiers: Oklahoma, Washington, Korth (AA, UK), Hyland (AA, UK),  Price (UB, Stanford)
lineup. This is the first time since 1998 that the Huskies will be at nationals, and this feat is even more impressive as it is Elise Ray’s first year as a head coach. The Wildcats were certainly disappointed as they came so close, but this team is young and the future is bright for it after this record-breaking season. Kentucky will still send two all-arounders to St. Louis in Mollie Korth and Alex Hyland.Stanford was coming in as the big underdog here with the potential to cause quite the upset, but unfortunately the Cardinal came up short. It did play with our hearts once again with Ebee Price scheduled to compete in the all-around, but actually, not really. Fortunately, Price won the uneven bars and qualified to nationals on that event, so we at least avoided quite the gymternet implosion there. Starting on beam, the Cardinal had troubles containing its nerves and had a fall right from the get go. From then on and with both Kentucky and Washington putting out their best performances, it became near impossible for Stanford to catch up. It did end the meet strong on bars with its highest rotation score of 49.1000, but it just couldn’t keep up with the other two. Furthermore, BYU had another solid performance to close out its season, and the Cougars scored their highest regional score in 12 years. Finally, the fourth-seed Aggies had a bit of a rough showing and were sadly not able to maintain their momentum from the conference championships where they went above a 196. As for individuals, it was hard for all to compete with the athletes present with their teams and to basically match Nichols’ score, but Lauren Rice (Sac State) won the love of the crowd with her unique gymnastics and fun personality, as we saw the Washington fans essentially lose their minds over her performances.