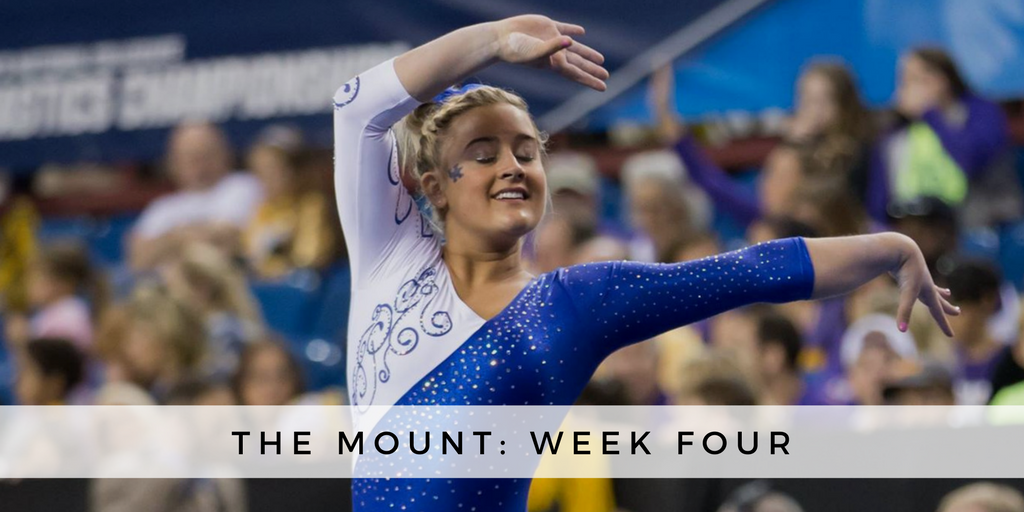 We’re onto another week of NCAA gym with things really heating up. With more strong teams this year than in the past, many more matchups are bound to be can’t-miss action. Front Kentucky’s showdown with LSU Friday to Arizona vs. Stanford Sunday, there’s lots to look forward to.
Injury Report
Out of Action or Questionable for Week 4
No. 2 LSU at No. 6 Kentucky: Friday, Jan. 27 at 7 p.m.

Before the season, few would have guessed this would be a matchup to watch. But now in week four of the 2017 season, Kentucky is bound to put up a fight against the Tigers. With the competition being in Lexington and the Wildcats coming off two program records in a row, if the Tigers slip up even in the slightest, Kentucky has a chance of taking advantage. With its core of strong all arounders in Mollie Korth, Katie Stuart, Alex Hyland and Sidney Dukes, strong scores are almost a given. But LSU won’t be easy to beat with 10-machine Ashleigh Gnat, beam beauty Sarah Finnegan and company.

.@lsugym travels to □ @ukgymnastics for a top-six matchup Friday at 7 p.m. ET! Will the Wildcats tame the Tigers? #NCAAgym

Missouri has been slipping slightly (and is now presumably without Morgan Porter) while Georgia has been progressively improving. Plus, being at home, the Gymdogs always get some sort of bump. However, if another balance beam situation is in the team’s future, Missouri wouldn’t have to have a great meet to leave Athens with the gym. It’s also Georgia’s pink and green meet which raises awareness for all forms of cancer (sucha Danna thing to do), so expect… Interesting leotards and hopefully an exciting competition.

Nebraska has had a solid start to its 2017 campaign while Michigan started kind of meh but showed out at its last meet against Illinois Sunday. Have the Wolverines finally pulled it altogether or is there still room to wiggle and make mistakes? Nicole Artz will be looking to replicate her perfect floor routine from Sunday while Paige Zaziski will hope to have a meet like the one where she scored a 9.975 on bars and not like the ones where she fell on two of her four events. Nebraska’s main goal will just be to put five bodies up on all four events as a severely depleted depth pool could spoil the Huskers’ chances if even the slightest injury occurs.

.@huskerswgym is at @umichwgym Saturday at 4 p.m. ET for a Big 10 showdown. Who takes home the W? #NCAAgym

UCLA is coming off a bye while OSU just finished a weekend of success after a really bad, no good bar rotation the weekend prior. But this meet could go one of two ways. UCLA could show up and compete to the potential of its roster—we still haven’t seen all of Kyla Ross and she already has a new floor routine. Plus, where’s Felicia Hano gone? Or the Bruins could have one of its typical early-season meets, bomb everything after putting up Jane Doe on every event and Oregon State takes the win. But it’ll be closer than you think if UCLA does perform well as the Beavers’ have Kaytianna McMillan and Maddie Gardiner on their side—both of whom have done well so far this season.

.@uclagymnastics is back in action this week against @beavergym Saturday at 4:30 p.m. ET. Who you got? #NCAAgym

This is an interesting one. Arizona started out a bit rough but has since figured out beam to score solidly in the past week or so to come into form. However, without Gabby Laub and Selynna Felix-Terrazas, at least for now, things just got tougher. Meanwhile, Stanford is still Stanfording but is starting to look a little better across the board, stepping up from a 193 to a 194 in its latest meet. However, a mere 194 won’t be enough to beat Arizona when the Wildcats are hitting.

We’ve got a Sunday showdown at 4 p.m. ET with @azgymnastics squaring off against @stanfordwgym. Cats or Cardinal? #NCAAgym

The first of two battles between these two rivals should be a good one despite Auburn’s slip this season. While it’s not likely for Auburn to add to its winning ways over the Crimson Tide from last season, you never can guess what the outcome of a heated rivalry competition will be. It brings a certain determination out of the athletes that not much else can. Alabama has been experimenting with its lineups recently, so it’s uncertain exactly which six Dana Duckworth will put up on each event. On the Auburn side of things, things have been hit or miss. If Auburn can put together a complete meet, it will have a fighting chance against the Tide.

Rivals @bamagymnastics and @auburngym are back at it Sunday at 5 p.m. ET at Elevate the Stage! Who comes out on top? #NCAAgym

Other Notable Matchups
No. 16 Auburn at No. 3 Florida: Friday, Jan. 27 at 7 p.m.
Florida is expected to continue its strong and steady performances. The Gators are back at home and are hopefully done resting Kennedy Baker (because we all need a healthy weekly dose of Baker’s gymnastics), and they will be a tough team to beat. Auburn has a tough weekend ahead with two meets with top SEC opponents, this one being the first. Hopefully the Tigers will keep improving on their performance and will put a complete meet together. While it’s still early in the season, the SEC is looking strong this year, with underdog teams shattering expectations, so if Auburn wants to have a decent shot at the evening session, it needs to start bringing its A-game now more than ever.

No. 9 Southern Utah at No. 24 N.C. State: Friday, Jan. 27 at 7 p.m.
SUU finally started its season last weekend and came storming out of the gate, positioning itself into a comfortable ninth-place ranking. The Thunderbirds will look to repeat their performance again and prove it wasn’t just a fluke. N.C. State, on the other hand, will be shooting to finally clear the 195 mark, as it’s come up just short three of its four meets so far. Losing to Ball State at home last week was a bit unexpected, so they’ll look to bounce back with a strong performance against SUU.

No. 1 Oklahoma at No. 34 Iowa State: Friday, Jan. 27 at 7:30 p.m.
This is another Big 12 road meet for the Sooners, but they are coming in as the heavy favorites. Freshman Maggie Nichols continued to dominate and shatter school and NCAA records last weekend, and she looks to be unstoppable. Now the real question is, will she be the second gymnast ever to score a perfect 40.0? We are only three meets in, and it’s looking like a feasible possibility for the freshman. ISU, on the other hand, will just be looking for a solid score against its powerhouse conference-mate. They’ll be looking to clear 195 as well, hoping for fewer falls and form breaks.

No. 5 Alabama at No. 23 Arkansas: Friday, Jan. 27 at 8:30 p.m.
Alabama will likely continue to explore its depth against the depleted Arkansas, who is without superstar Amanda Wellick and freshman bar contributor Hailey Garner. Though they managed to have a clean meet and count no falls against Georgia last week, their score certainly still suffered, and Alabama is chugging along much more consistently than Georgia was. The Tide, on the other hand, will hope to continue forging ahead and adding in the difficulty they’ve been training to reach scores like those further ahead in the rankings.

No. 4 Utah at No. 19 Washington: Saturday, Jan. 28 at 4:30 p.m.
Utah is coming off a season high at its home quad meet while Washington had an improved performance as well. But this will be a difficult one for the Huskies to win just because of the strength of the Red Rocks squad. The real storyline will be MyKayla Skinner’s ongoing faux-battle with Maggie Nichols for best freshman in the land in 2017. Skinner had a pair of 9.975s last weekend while Nichols followed it up with a 10.0. What will the Utah freshman do next?

No. 50 Arizona State at No. 15 California: Saturday, Jan. 28 at 9 p.m.
This should be an easy win for California, but that’s not really what this meet is about. It truly is about each individual team. Cal has some floor work to do but isn’t far off from last season’s form. The freshmen need to hone their skills and work on consistency a bit, hitting all their lineup routines rather than just one or two, but for now, the team as a whole is doing a solid job of staying in the conversation. Arizona State won’t challenge the Golden Bears here, but it has shown remarkable improvements over 2016 after only three meets in (as well as in the leo department). If it can clean things up a bit and get more consistent overall, it’ll be back to push the Pac-12 in no time.

No. 6 Kentucky at No. T-31 Ball State: Sunday, Jan. 29 at 1 p.m.
Kentucky will hope to continue a successful weekend against Ball State Sunday for its second competition in three days. The Wildcats will hope to put up a strong road score to later add to its RQS calculations while also not falling prey to Ball State’s streak of upsets over higher-ranked teams in the recent weeks. Wildcat freshman Mollie Korth will look to continue her quest for the SEC Freshman of the Year title and the rest will work towards setting another program record in the process.

No. 7 Denver, No. 54 Temple, No. T-42 Towson at No. 25 West Virginia: Sunday, Jan. 29 at 2 p.m.
Denver benefited from the home Utah bump last weekend, posting a near-197 at the quad competition with Boise State, Utah and UIC. Maddie Karr had an off meet, though, if you call a score of 9.85 over the events an off meet. But having her back at her 9.9+ self and the rest of the team performing like it did last Friday, things will be looking pretty for the Pioneers. The main goal of the team will be to stay at its impressive ranking of No. 7 in the nation. West Virginia is also coming off a somewhat solid meet. However, it needs to do more and be cleaner and more consistent if it wants to put any pressure whatsoever on the Pioneers. Temple and Towson too have their own things to work on. So it’ll hopefully be a meet of improvements all around.

These aren’t the only meets happening this weekend! To see all the matchups all in one place, take a look at our master schedule. You can also find live scoring and video links below.
Do you play Fantasy Gymnastics and don’t see a team some of your gymnasts’ teams competing this weekend? See if they’re on a bye this week (or competing twice) below, and check out the entire byes and doubles list here.
Want to receive the latest collegiate gymnastics news in your inbox? Sign up for the NCAA Gym NewsLetter here.
Facebook0Tweet0Pin0