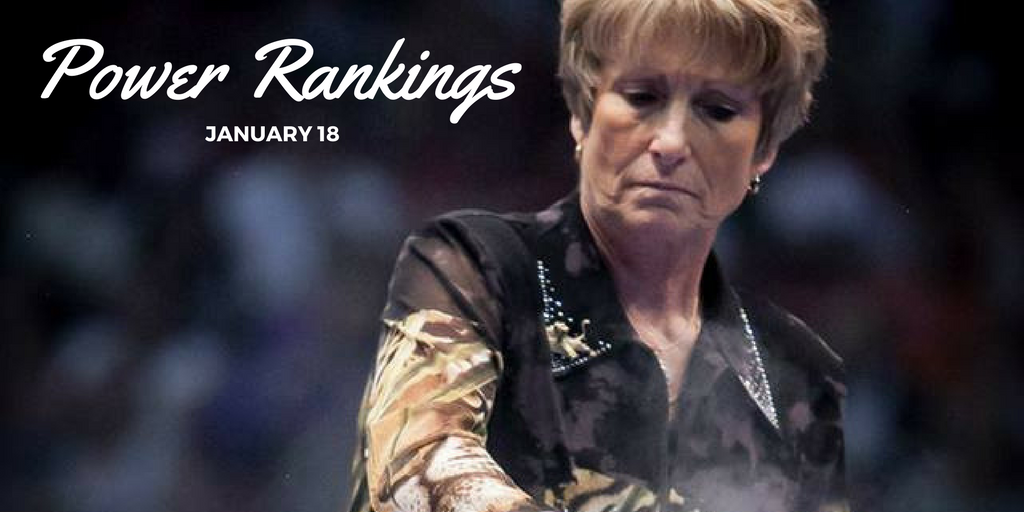 We’ve got the first two weekends of the 2017 collegiate gymnastics season under our belts! Doesn’t it feel nice to be back? The start of the season also means we can finally come up with realistic rankings rather than that thing that came out before the season started that most of the head coaches crafted up.

Rather than looking at last year’s results, we watched the meets from the past who weekends to get a sense of where teams stand relative to each other. From there we ranked teams we think should be in the top 10, based on our opinions of how they look. If you followed along with our power rankings last season, you’ll remember we typically had a theme to go along with our posts. However, for this first edition in 2017, we’re straight shooting. The themes will start the next round.

If you’re a traditionalist or numbers freak, you can look at the  Road to Nationals official rankings here.

No. 1 LSU
You know, I love my Sooners to death. But the scoring was absurd this past weekend, and while I understand the team can’t control the scores and it was still a wonderful and strong performance, I didn’t think it was a 198+ performance. So with the smallest margin, I would put LSU above OU for this week, still. LSU looked great, confident, clean, and achieved the feat of beating Alabama on its home turf in Tuscaloosa, which is no small feat. (CMa)

No. 2 Oklahoma
Basically for the same reasons as above. OU looked good, but had a few weird and unusual mistakes and some super wonky/generous scores. The Sooners can perform a lot better than this past weekend, and it is still early in the season so I wouldn’t worry about it. For now and based on performance quality from this past weekend, I would still put them in second place behind LSU. (CMa)

No. 3 Alabama
Though their first meet against OU was riddled with rookie mistakes, the Tide’s second outing against LSU definitely showed us what they’re capable of. Bama is making good use of their freshmen, and most of the seniors are really stepping up their game. With Sims consistently doing three events and Winston in the all around, I think Bama is just edging out the rest of the pack below right now. (CMe)

No. 4 Florida
Florida’s big score this weekend against Kentucky may have been somewhat a product of home scoring, but the Gators are actually doing really well! Now that they’ve put Slocum in her lineups rather than exhibitioning her and without the fluke mistakes of Week 1 by some of their big players, I think they’ll be able to compete for top spots more than we realize. (CMe)

No. 5 Utah
Utah has looked good this season so far with few mishaps and a developing group of freshmen poised to do big things. It’s not just Skinner and Co. (or it won’t be for long). If it can keep the trend moving upwards, Utah will easily make the Super Six. (EG)

No. 6 Missouri
I’m throwing a curveball at you, I know. You probably expected me to pick UCLA, huh? Well I don’t think the Bruins are top six material quite yet (although I do think they’ll be competing the final night of the season when the time comes). Anyway, I chose Missouri for a couple reasons. The Tigers are my No. 6-team at this point in the season. They might not be one of the top at season’s end, but right now, they look good. The core of Aspen Tucker, Britney Ward, Morgan Porter and even Kennedi Harris are a strong quad able to stand up with the best of them at this point. And with other teams faltering, Missouri has kept chugging along. (EG)

No. 7 UCLA
UCLA is being held back by injuries – haven’t we heard this story before? The stellar freshman class we predicted to lead the Bruins is doing well, but cautiously so. Their big name stars – Ohashi, Ross, Kocian, Lee – keep having flukes that are keeping them from scoring as well as they should, and all have current or old nagging injuries that are keeping them from being their best. Team workhorses Meraz and Honest keep chugging along, but it takes more than two solid, healthy gymnasts to make a Super Six team. (CMe)

No. 8 Kentucky
Why Kentucky? Mollie. Freakin. Korth. That’s why. Joining the team in January out of nowhere, this freshman powerhouse has won the AA now two weeks in a row, With big skills like hers, she is truly a rising star for the Cats. And with backup all arounders like Dukes and Hyland (who both qualified to Nationals as individuals in 2016, if anyone had forgotten) and a supporting cast pulling 9.85s on the regular like Stuart and Rechenmacher did this week, UK may finally be on its way to the night session of SECs. (CMe)

No. 9 Denver
Denver is mainly here because of Maddie Karr. But it’s not just the Maddie Karr show. Sam Ogden is showing a real knack for bars and Nikole Addison is coming into her own on not just floor but the other events as well. There is limited depth, with the Pios only able to put up five on vault and floor, but if they can stay healthy, I see at least a trip to nationals in store. (EG)

No. 10 Nebraska
It’s only had one meet, but Nebraska looked pretty solid in its first showing of 2017. But of course, it still had to Nebraska all up in the meet (but not as hard as Penn State Penn State’d) and competed a total of eight gymnasts. We’ll see if their success was a fluke or the real deal in the weeks to come. (EG)