Skip to content
Facebook0Tweet0Pin0
Passport to Paris
1. Florida
​
Passport to Paris was one of the best MK&A movies made. I’m not going to go all out and say it’s my favorite because I don’t have one, but it’s up there. It has everything, just like Florida. There’s Paris, French boys, a cheesy shopping/fashion show montage and hilarious one-liners. I mean, when you watch the Gators, don’t you just want to go, “Bonjour, Bonjour, oh my god!”

These teams are great but not the best. They showed signs of being the best but aren’t there quite yet. Whether it’s Oklahoma’s small floor mistakes and weird beam falls or Michigan’s “I can’t seem to get out of the 196.9s,” there’s something holding these teams back from being on Florida’s level. That’s how it is with Our Lips are Sealed. I mean, how can’t you love a movie set in Australia, with surfing and kangaroos and international jewel thieves? But there’s just one thing that keeps it from being great (“I know, I know, but he’s so cute!”)

Billboard Dad is the movie I forget about and then realize I actually really love. It’s in my iTunes library after all (don’t judge). I also tend to forget about Auburn and Utah unless they do something outrageous like have a random 198 or 9.9s out the wazoo. But then I remember they exist and am like, oh, hey, you’re pretty good and actually doing pretty solidly average so far. 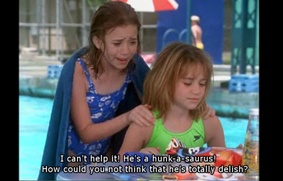 New York Minute actually made it into the theaters for a hot second, but ended up doing not-so-great as people realized it should have stayed a made-for-TV movie like all the other MK&A gems. LSU and Georgia each started out their meets this weekend on fire, with Georgia posting the highest vault total in the country so far and LSU on its way to a mid-197. But then beam happened. And things fell apart. A lot. Why you gotta make things so complicated?

The Challenge was one of the most underrated MK&A movies made. I mean, raise your hand if you even know the movie I’m talking about. See? All these teams are pretty underrated at this point in the season as well. I mean, Missouri? Just a couple years ago it didn’t have an SEC win to its name. Now it’s posting 196s. California has been slowly creeping up for a couple years now, but non-hardcore gym fans still don’t recognize the talent coming from Berkeley. Same with Denver, who always seems to be a bridesmaid but never a bride. George Washington literally came onto people’s radar last week, so yeah. Underrated. Then there’s Arkansas. The Razorbacks might have lost to Georgia, but they had a strong showing despite the L and are making a strong case for being in the mix for that last night session spot at the conference championships.

Holiday in the Sun
15. Stanford

Stanford is the Holiday in the Sun of NCAA gymnastics teams for the sole reason that this movie featured a young Megan Fox before she was a thing. Stanford in January typically goes unnoticed before coming out and making Super Six. I mean, upsetting Georgia (even a Georgia team that falls four times on beam) isn’t anything to take lightly. Plus there’s Play’s “Up Against The World,” “One Girl Revolution” by Superchick, and Weezer’s “Island in the Sun”. So there’s that.