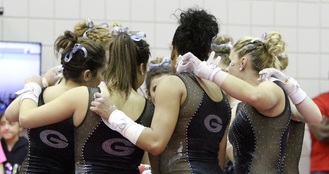 The Georgia gymnastics team held its second annual Pumpkin Peek Sunday afternoon, showing off skills, demonstrating parts of routines and giving fans a look into the work that goes into the final product most only see on meet day.The exhibition also gave the freshmen their first shot in front of fans as a couple hundred people packed the Gym Dogs’ training facility on the rainy November day.

Not everyone performed on each event, but those who showed skills, partial routines and dance pieces looked solid. There’s still obvious work to be done before the season begins, but still plenty of time with just around two months until the first competition of the season.

The peek’s main focus was to educate fans on why the team does the things it does and the process it takes to get there. It served as a great opportunity for those in the audience who are not experts on the code of points a chance to become more knowledgable before January.
​

Vault
The majority of the girls showed progression drills to the onlookers, showing first vault drills on a mat into the pit, then vaults onto stacked mats, then onto competition surfaces and finally competition height and landing vaults. Senior Brandie Jay and sophomore GiGi Marino executed solid Yurchenko one and a halves onto soft, competition-height landings while juniors Ashlyn Broussard and Rachel Schick stuck with fulls. Schick had some trouble with her attempts. Missing from vault was freshman Sydney Snead who is known for her power on the event as well as floor. She is slowly coming back from a back injury.

​
As for releases, there really was a ton of variety. Schick added a Tkatchev to go along with her piked Jaeger, Jay chose to perform her Shushunova release, which Ogletree describes as a “full-twisting Tkatchev,” for her senior year, Sanders upgraded form a straddled Jaeger to a piked one and sophomore Lauren Johnson threw a Gienger. Freshman Gracie Cherrey also had a Ray — a toe-on Tkatchev — like Jay competed in 2015 and Vakulik also upgraded from a straddled Jaeger to a pike like Sanders.
​
Beam
Beam was more about showing fans single skilsl and basics than any sort of routines, although Schick and Broussard performed full routines at the end of the rotation and a couple others did skill sets (routines without the dance). Jay and Schick look strong on the event after not yet competing it yet in college. Schick works a unique one-armed front handspring to switch leap to tweedle jump and Jay’s series is a front toss to back handspring. Box upgraded from a plain front aerial to a front aerial to scale giving her a bump from D skill to an E. Freshman Caroline Bradford hit solid front tucks and one and a half dismounts.The crowd loved Jay’s switch leap to straddle quarter shushunova to back hip circle as well as Marino’s single standing back handspring to double back. Overall, there’s a good variety of dismounts and skills on the beam: a cartwheel gainer full from Schick, one and a half from Jay and Bradford, double back form Marino (and senior Brittany Rogers once she arrives) and a cat leap to side aerial to back full from Vaculik. Head coach Danna Durante mentioned liking each gymnast to have something, whether it’s a skill or piece of choreography, that makes them stand out.
​
As for the routines, Box, Jay and Cherrey performed dance throughs, all with dynamic sets. Box brought her wave from last year’s routine and has upbeat music that had the crowd clapping along from almost the very beginning. Part of Jay’s music is from the gymnastics movie Stick It, so expect it to resonate with a good chunk of the gymnasts in attendance at the meets. She also has some woofing here and there and her usual, cool heads-spin choreography from years past. Cherrey’s dance was also powerful to go along with her hard-hitting music. Also of note is a new trend the team is adding to each floor routine in 2016. Similar to the “Gator Chomp” in Florida routines or “Flashing the U” in Utah sets, the Gym Dogs will all be doing a fist pump-like motion where the crowd will shout “Go Dawgs! Sic ‘Em!”
FacebookTweetPin