[UPDATED 2/16/21 4:46 ET]: Iowa State announced that it is officially back in the gym and will be competing at Illinois State as planned this week.

[UPDATED 2/18/21 2:54 ET]: Sekai Wright has an elbow injury and will not be UCLA’s vault lineup at Utah. Arizona and Arizona State will have a dual on Wednesday, Feb. 24. Depending on your fantasy week, this may affect your byes and doubles for this week.

Michigan State remains inactive for a second week while dealing with COVID cases in the program. Its scheduled opponent, Illinois, is meeting Michigan instead, while the Wolverines attempt to make up road meets they missed during their own pause. Michigan was meant to see Maryland, but that meet has been cancelled.

Iowa State may or may not compete this week due to cases in its staff. We’ll update this post when the team announces its plans either way. Its opponent is Illinois State.

Western Michigan and Kent State meet on Thursday, and both compete again on Sunday, so be sure to double check what that means in your league’s definition of a week! The other doubles are standard Friday/Sunday affairs.

Alaska transfer Izzy Fox hit a solid vault for Illinois State this weekend. She has great potential on all four, and it was great to see her settle in and hit a meet. She’s especially strong on vault. Ball State is having a historic season, and Victoria Henry‘s vault numbers are part of it. She had a miss last week, but she is capable of a 9.925 in addition to usable bar and floor numbers. Did you catch George Washington’s debut? Kendall Whitman has a stellar 10.0 vault, and scored a 9.950 on floor to boot. Martina Comin is finally healthy for the Huskers, and she has a dynamic Yurchenko full that went 9.800 last week.

Lindenwood’s Savannah Newsome has really found her stride; if you haven’t nabbed her yet, get on it! Nebraska tweeted that Kinsey Davis was being rested this week, but we did spot her on crutches at Michigan. It could have been something like a tweaked ankle, but put her in your lineup with caution. N.C. State’s Meredith Robinson has been cruising on bars this year, consistently in the 9.8s.

We knew LIU’s Alisson Lapp would be a beamer, but teammates Taylor Doten and Alyssa van Allen both notched 9.750s in the Sharks’ first ever meet. Clara Colombo exhibitioned beam for Nebraska. Given the Huskers’ tendency to count falls this year, there’s a chance Heather Brink tests her in that lineup next week.

Central Michigan’s Taylor Pitchell notched a 9.950 last week. Her average is solid, just shy of a 9.800, and she has improved every week so far. Staying in the MAC, Northern Illinois’ Tara Kofmehl has been consistently good with a 9.900 high. N.C. State’s Chloe Negrete has been off to a great start in 2021. The three-eventer will get you solid vault and beam numbers, but don’t miss her on floor especially, where she tops out at a 9.925.

Starts, Sits and Pickups for Week 7

Sekai Wright didn’t vault at Washington, but we assume she’ll be in the UCLA lineup against Utah. Abi Solari finally broke the California vault lineup. She was in for Natalie Sadighi. Use either of them with caution, but it seems likely that Solari will get another go since she scored a solid 9.775.

Bar phenom Emily Muhlenhaupt missed Boise State’s meet last week due to contact tracing; it seems likely that—assuming she doesn’t test positive this week—she’ll be back. Olivia Trautman didn’t make her expected return to bars at Metroplex; we assume she’ll be back here any week now, but since Oklahoma has a low-pressure contest this week, it doesn’t seem likely that KJ Kindler will put her up. It sounded like Maddie Mariani was pulled out of Michigan’s bar lineup at the last minute in favor of Nicoletta Koulos. We don’t know why but can assume they’ll be fighting for the second spot next week, perhaps with Naomi Morrison who competed an exhibition as well.

The Sooners finally put together a solid beam lineup, featuring Karrie Thomas and Vanessa Deniz. If Ragan Smith is still out next week, we can expect both to keep their spots. Headline recruit Carly Bauman made her debut for Michigan—in the leadoff no less—for a 9.850. She also exhibitioned on floor. Utah’s last beam spot has been a bit contentious, but Lucy Stanhope‘s 9.825 before the bye week make her a strong contender since Emilie LeBlanc has been so hit or miss this year.

There were some videos floating around of Ragan Smith warming up her double layout at Metroplex. Both landings were very crunchy, which may be why she was in a boot and out of the meet. Since the Sooners’ meet this week is very low-stakes, we won’t be surprised if she’s rested again, especially on floor. Don’t stress about UCLA’s lineup: The Washington dual was a rest opportunity and depth meet. With Utah on the docket, we’ll see Chae Campbell and Pauline Tratz back here. 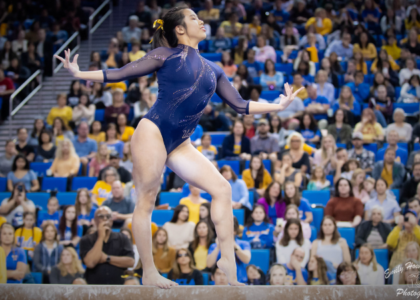