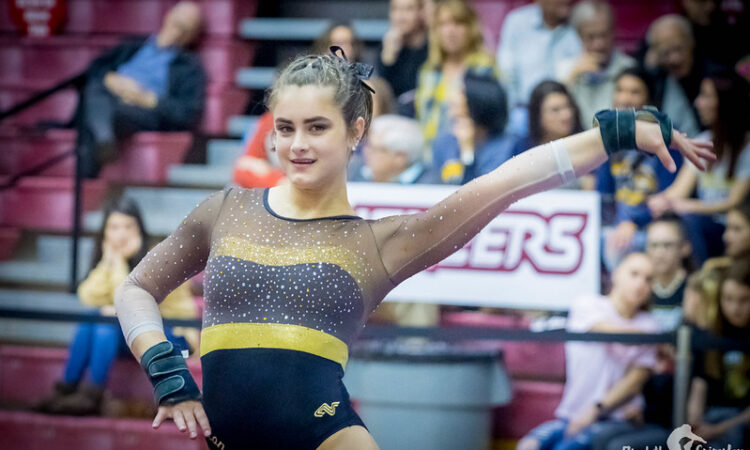 The USAG started off decimated this year, with Yale, Penn, West Chester, Brown, Southern Connecticut and Cornell opting out of the 2021 season, the Seattle Pacific program being cut earlier in the year and Bridgeport both not taking part in the season and unsure about its survival next year.

Nevertheless, season was underway this week, and Lindenwood started off with a bang and a record performance right out of the gates. The Lions defeated SEMO and Texas Woman’s with their highest season-opening team score in program history. Meanwhile, Air Force made its 2021 debut with a new coaching staff.

Turon sealed Lindenwood’s win over two MIC rivals with a stuck Yurchenko Arabian and a career high-tying 9.850. The senior missed the 2020 season with injury, so returning with both a team win and an individual title is extra sweet.

Unusual Skill of the Week

Bardes’ eponymous skill, a piked Deltchev, isn’t new, but it is beautiful and unusual

Lindenwood and SEMO at Texas Woman’s

The Big Storyline:  Lindenwood made the opening gambit in the MIC this year, defeating two conference rivals with a great team total. All three teams at this meet posted impressive scores compared to the past few years’ January results, even with Texas Woman’s and Lindenwood leaning heavily on underclassmen to make up lineups.

Implications: It’s going to be hard to speculate about postseason qualification this year since we have literally no idea how many teams will qualify to USAG championships and how the process will work. But in a normal year, all three of these teams would look like very serious team qualification contenders.

Records: Lindenwood’s 193.000 is its highest score in a season opener in program history. Aleah Turon’s meet-winning 9.850 on vault ties for her personal best.

Why You Should Make Time to Tune in: The MIC is a majorly competitive conference, and it’s super exciting to get to see the three best teams match up this early in the season. Moreover, with a number of teams out for the year, there’s a great chance that this will be our first look at the eventual USAG national champion.

Need More Proof? If you’re sad about the gymnastics teams we won’t see in 2021, it’s a great year to support Texas Woman’s sophomore Alix Pierce, formerly of Seattle Pacific. She looked great on floor and particularly beam at last week’s intrasquad. We’re also extremely excited about Lindenwood freshman Savannah Newsome, who has the makings of a future 9.900 on bars.

The Big Storyline: This was Air Force’s season debut. The Falcons began their 2021 campaign in better fashion than in 2020, though they seemed to run out of gas at times, especially on floor. Last year after the initial hiccup, they got accustomed to scoring in the 193s, and they undoubtedly want to aim for the same results this season as well. Luckily for them, Tyler Davis was back on vault and bars after tearing her Achilles last season. Her nearly stuck Yurchenko full was a beauty. For Southern Utah, this was the second meet of the season after debuting at the Best of Utah last week, and it outscored its season opener by over one point. The Thunderbirds avoided last week’s beam disaster but still showed some nerves, as well as some landing problems all around, preventing them from aiming at the big, though inconsistent, 197-plus scores of last season. Michigan alumna Polina Shchennikova debuted as volunteer assistant coach for Air Force.

Implications: SUU’s improved performance this week was enough to overtake Utah State for second place in the MRGC behind BYU. The battle for the conference title between the Thunderbirds and the Cougars may be closer than scores currently show, as BYU is also showing some uncharacteristic inconsistencies.