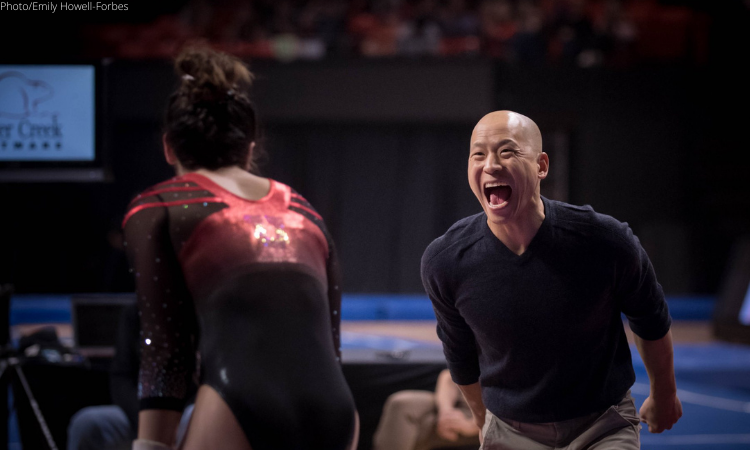 The COVID-19 pandemic has placed new and unforeseen pressures on teams, brought decades of training to a quick end and robbed college seniors of their last farewell. If there is one thing that can inspire us, it’s the gymnastics community’s resilience and the teams’ determination to turn the page on disappointments. But even the 2021 season is likely to look a little different than normal. We talked to a few college coaches who shed some light on how their teams have adapted during the pandemic.

Virtual Meets? Not So Fast

While there’s been talk about virtual meets, with different teams competing in various facilities and video capturing the gymnast’s routine, some of the top coaches on the women’s side don’t think virtual meets are practical or a reality.

LSU Head Coach Jay Clark questions whether it is as simple as it seems on the surface, believing that if the NCAA gets to the point where they’re considering virtual meets, he guesses that there won’t be a season altogether.

Clark points out that virtual meets would be challenging to be equitable, noting that gymnasts would be competing on different equipment and different landing surfaces. Then there are judges watching a routine on a screen. Clark questions if a screen can reproduce the quality of a gymnast’s performance.

“If you create this sort of sterile environment with someone sitting behind a computer screen somewhere remotely, I don’t know if we can get a true picture of a gymnast’s routine,” Clark said.

Utah Head Coach Tom Farden has a similar viewpoint. Sitting on the WCGA board, Farden says—at least preliminarily—the NCAA wouldn’t allow virtual meets because they would not have allowable scores. He questions the many roles that need to be filled, wondering who would take on the duties. “Who would do the equipment checks? At a college gymnastics meet, the judges do the equipment checks not only for safety, which is first and foremost, but also to make sure things are regulated,” Farden said.

Volleyball Is the New Gymnastics

While won’t be seeing gymnasts turn into volleyball players anytime soon, the sport has garnered a lot of interest from gymnastics coaches. Clark believes that if there is a season, a lot depends on the fall sports. LSU is obviously looking at football, but volleyball and soccer are perhaps even better models. “Especially volleyball because it’s indoors. We’re going to look at some of the practices they’re putting in place for their competitions and see how we can enhance that and create the safest and most practical environment,” Clark said.

The importance of volleyball is not lost on Oregon State Head Coach Tanya Chaplin. “We are watching the volleyball teams, and we’re trying to think outside the box, considering how we can travel with them,” she said. By possibly traveling with another COVID-19 tested OSU team, the Beavers can limit their chances of exposure.

Chalk It Up to Safety Protocols

If Clark ever finds extra time, he might consider pursuing a degree in immunology. Since the pandemic hit, he’s been on a mission to make the LSU gymnastics facility as safe as possible. It’s a journey that has taught him everything he needs to know about viruses.

The Tigers recently installed a Continuous Air and Surface Pathogen Reduction system (CASPR) unit. This high-end unit goes into the HVAC system, retailing around $85,000, and essentially attacks and kills every airborne passage in the air and on surfaces in their gym, operating 24/7.

“It’s going to virtually eliminate any risk once they’re inside this facility. While someone can walk in with COVID-19, they’re not going to spread it while they are in the building.”

In addition to disinfecting their mats after every rotation, the LSU gymnasts are using their own chalk. Clark is encouraged by recently learning that viruses cannot live in magnesium bicarbonate chalk.

In 2017, Utah installed UV, hospital-quality lights in high-touch areas. Farden explains that UV lights scrub everything, killing COVID-19. These lights are in their locker rooms, bathrooms, foyer, storage areas and any room with high-touch and high-frequency traffic.

OSU recently added an AIR-THX filtration system, in addition to a spray system. Chalpin is excited about the filtration system’s recent installment, hoping it will optimize the gym’s cleanliness.

Space is an important consideration for all three coaches. Each coach has strategically considered the best use of their space, optimizing their facilities to keep the gymnasts safe. At Utah, LSU and OSU all gymnasts are grouped in pods.

The Red Rocks started voluntary training on June 15, starting in pods. Because they live in the same quarters, roommates can work out on the same pieces of equipment. They are referred to as pods.

Farden is a numbers guy. He can easily rattle off the Red Rocks’ attendance for the past five years or last season’s ticket sales. He’s quick to mention the NCAA rule of a gymnast practicing 144 days. If you ask about MyKayla Skinner’s hit-routine streak, he’ll say it was 161 without hesitation. For Farden, however, the most important number this season is the number 14.

The number 14 is crucial because you can only merge pods into groups after 14 days of safe training. Farden noted, “It had to be exactly 14 days.”

Farden is proud of his staff’s efforts. “The one thing about the gym is that it is highly monitored. As coaches were all invested deeply in the process of trying to keep things as hygienic as possible,” he said.

Built in 2016, LSU’s state-of-the-art facility has 18,000 square feet of practice space and is large enough to put enough spacing in place. Clark gives the example of three gymnasts vaulting. If someone vaults, they come about halfway back down the runway. Assistant Coach Bob Moore has a strength exercise they can do. Then the next gymnast goes and the first vaulter can move to the end. There’s no congregating around the chalk tray or at the end of the runway with this staging. Even with LSU’s large team of 20 gymnasts, the 18,000 square feet has about 800 square feet per gymnast.

In addition to keeping them spaced, they’re not allowing gymnasts to share bars unless they live together.

“We’ve been dividing our group by household. After that, the group is divided based on where their strengths lie in our team.”

While it was in the works since March 2019, OSU’s new gymnastics facility couldn’t come at a better time. On the western edge of the OSU campus, the new facility has 17,000 square feet of space and about 7000 square feet allocated to the gymnasts. Like Utah and LSU, OSU is practicing with different groups and different pods. The OSU quarter starts mid-September, so the gymnasts are still under voluntary training. Chaplin mentions most of the team has arrived, with a few staying back. They have about 12 athletes there, with the entire group returning by September 10.

There are other discussions in the works in regards to the 2021 season, such as pushing it back the to the third or fourth week in January. There is also talk about conference-only competitions. While the coaches are grateful for any season, none want a repeat of last year, hoping for a meet season that concludes with the NCAA championships.

If nothing else, COVID has taught the gymnasts not to take anything for granted. Chaplin mentioned it’s difficult for the gymnast to deal with the feeling that things are not within their control. “Each year we work on our individual ‘why’—what motivates and drives us to perform our sport or keeps us focused on our field of study,” Chaplin said. “Having asked and answered that question has helped each of us stay motivated. We are looking forward to getting back to competition and the classroom.”

Farden remembers last year’s seniors, hoping for a better outcome for this year’s. “We are tickled pink with the team and optimistic that gymnastics will resume again in the spring—whatever the dates may be—and hopeful that the athlete juniors that got short-changed and all of the NCAA seniors have their best year ever.”

Clark believes LSU’s toughest opponent is the coronavirus. “It’s an opponent that we’ve never had to engage with. It’s something that we’ve never understood,” he said. “The kids are used to being very social. They have to be very disciplined. It’s difficult, but I’m confident they’re mature enough to do it.”

He’s optimistic the NCAA will meet the challenges of COVID-19. “I believe we’re going to have a season. We’re going to learn a lot this fall from other sports, and we’re going to wrap our arms around this thing a little bit better as we go. I can’t tell you for sure what it will be like, but I think it’s going to be something that we’re all going to be able to enjoy.” 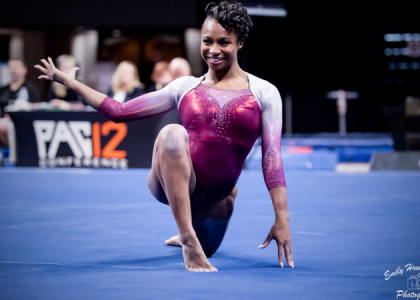 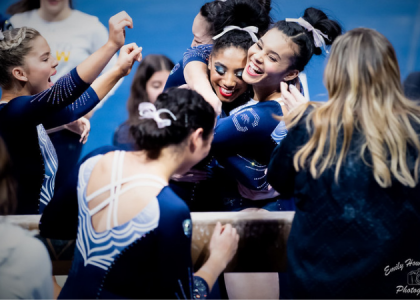