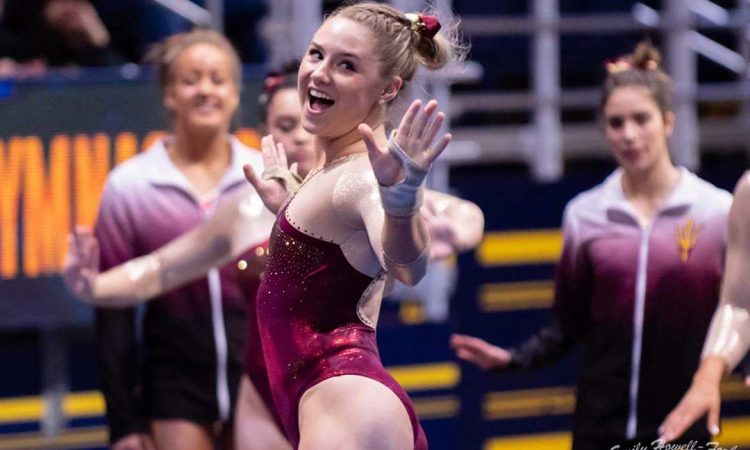 First thing’s first, this meet’s rankings are quite deceiving: Arizona State had a meet on Monday, and its real-time ranking after that good result is No. 29. So, yes, this thing is CLOSE. And it should be a feisty one, too: There’s no love lost between these two universities or their fans. I love rivalry meets, so this should be exciting.

I give the advantage to Arizona for two reasons. First, the Wildcats have been much more consistent over the season, while Arizona State started in a really difficult place and didn’t crack 195 until February. Second, the meet is at Arizona, and the Sun Devils have performed better at home this season. That said, Arizona State has the higher peak of the pair and can sweep the Wildcats away if it comes out hot.

Davis (UA): Her steadiness this year has meant a great deal for the WIldcats. Pretty FTY with a small hop back. 9.8

Scharf (ASU): Maloney to Pak, a little flat with leg separations, missed a handstand, knees buckled on her FTDB dismount with a step back a little low. 9.725

Hargrove (UA): A lot of height compared to her size on her FTY, little hop back. 9.8

Boyer (ASU): Toe to Maloney to Pak, great leg form, the tiniest leg separations, they barely exist. FTDB with a hop back.

Reeves (ASU): Blind to Jaeger, feet and knees in the air, toe on to bail with a foot flicker. Double layout with flexed feet and a hop back.

Bellows (UA): One and a half, a touch underrotated with a step back and across.

Leonard-Baker (ASU): Maloney to bail to piked toe shoot, FTDB with a hop back. Might have missed the first handstand, one of those angles where you’re really just guessing. 9.825

Strong start from both teams, highlighted by lots and lots of sticks. Scores staying fairly conservative on either side so far. Juliette Boyer was my routine of the rotation. She’s a very, very beautiful bars gymnast when she hits her “it” routine, which she can’t always find.

Kane (UA): Blind to Jaeger, one flexed foot, to overshoot. Double front with pointed toes and a little step.

Redmond (ASU): Solid FTY, step back. Neither of these teams really does technically wow FTYs. 9.725

Linton (UA): Tkachev, okay, toe on to bal. Blind full double back a little cowboyed but stuck with one foot a little behind the other. 9.65

THE STICKS AT THIS MEET ARE RIDICULOUS.

Scharf (ASU): One of the first vaults from this meet that I’d think of as pretty, with a step back.

Reeves (ASU): This tucked one and a half is always a mess, but good landing.

Leydin (UA): I’m just here for the Markelov. It was great, so I can go home. Blind full double back and goes a little deep to hold the stick, tiny step at the end. 9.8

Berg (UA): Goes BIG on the pike Jaeger, no cutting it down due to nerves over here, FTDB and holds the stick for a second and then quickly salutes and peaces out of there. They probably won’t give that to her but they may just. 9.825 what are you on?

Arizona sort of got owned by the judges at home there. It’s definitely an imperfect bars team, but it’s scored much higher than this in previous weeks.

Hendrickson (UA): Beat jump split 3/4, BHS LOSO, check with an arm swing and smiles through it. Hitch kick side aerial, little adjustment, switch leap Korbut. Cartwheel gainer full with a step, I type exactly as the commentator says “with a stick” so what is the truth? 9.775

Reeves (ASU): Two and a half twist, a little messy with a hop forward. Whip half front full, I love a backspin, switch switch ring 1/2. FHS Rudi, pretty good, some teammate is screaming into the mic and it’s VERY distracting. 9.775

Leydin (UA): Wolf turn, hitch kick switch side. BHS LOSO, a touch off line and holds it, double tuck dismount with a hop back. 9.875

Boyer (ASU): Front lay to Rudi, a little low, double pike a little low again. Not a particular power gymnast. Tour jete half wolf full, one and a half front lay. 9.85

Brovedani (UA): Beat to sissone, front aerial back tuck off line but keeps moving. Switch half to split, round off one and a half dismount stuck. 9.8

Scharf (ASU): Front through double back, great landing. Front full front tuck, controlling landings really well and great presentation. Double pike, overrotates it and sits before she seems to know what has happened to her. 9.125

Leung (UA): BHS LOSO, little check and keeps it on with her arms, switch switch and nails the splits. Side aerial back full stuck. She out here. 9.8

Ginn (UA): Front through double back, nailed it. Front lay to Barani, switch side Popa, double pike, sets back and is rotating into the landing with a big lunge. 9.8

Leonard-Baker (ASU): One and a half front full, tour jete half wolf 3/2 and missed the wolf position badly. Nailed the double pike. 9.875

Arizona put together a fantastic 49.250 on beam there, very steady. I thought Arizona State scored higher than it should have, with two major mistakes besides the fall that weren’t really deducted. I’d have had Ginn in the 9.60 range and Leonard-Baker probably not higher than 9.70. Weird thing to be talking about at a rivalry road dual.

M. Thompson (ASU): BHS BHS LOSO, unsteady landing but pivots and gets it back. Split straddle 1/4, side aerial back full with a step back. 9.8

Leonard-Baker (ASU): Straddle jump to LOSO I think, check, check on something else, beat to straddle 3/4 strong. BHS LOSO with major form issues, not used to that being bad for her. One and a half dismount stuck-ish.

Arizona has probably given it away at this point.

Davis (UA): Front double full, very good landing, Rudi to double stag. Tour jete half Popa. One and a half front lay. Great recovery fron a couple of iffy ones.

Scharf (ASU): Wolf turn, BHS LOSO good. Side somi, great, switch split with split issues. One and a half dismount with a hop.

Wow, what a close meet and a great upset by Arizona State! There isn’t really a Pac-12 straggler this year, the conference is deeper than it has been in a number of years. The first session of the conference championship could get REALLY interesting.