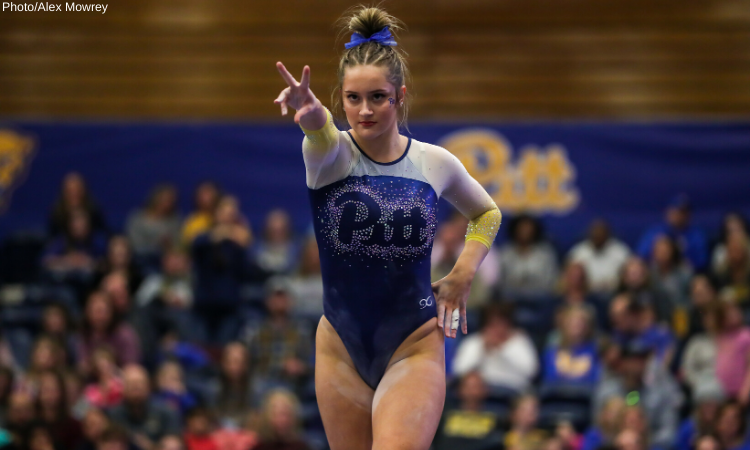 Pitt has been on a roll after a slow start to the season and is looking for another good score in its penultimate home meet. If the Panthers continue on the path they’re on, qualifying to regionals as a team is not out of the question. As always, keep an eye out for Michaela Burton, who has been a standout on bars, beam and floor, as well as seniors Deven Herbine and Alecia Petrikis who have been having great seasons.

Towson is already a much stronger team than it was last year, thanks to a new coaching staff and an impactful freshman class. Sophomore Emerson Hurst seems to have found her groove this season after a slow start, scoring a 9.875 on beam and a 9.800 on floor last week.

Yale did not get off to the best start in 2020 but has scored over 194 the last two meets. Keep an eye out for Jacey Baldovino, who is fantastic on bars and beam, as well as Raegan Walker, who is limited to bars but can score well when she hits.

Great first rotation from Pitt and Yale! Towson had a rough go on bars. No falls, but a lot of significant mistakes

Rough go for Pitt on bars. Towson didn’t count any falls on beam but a lot of wobbles. Yale up by more than a point, but now they go to their weaker 2 events.

Great recovery for Pitt on beam! Yale still leading but Pitt is closing the gap. Yale’s bars can be inconsistent, so they’re going to have to hit if they want to pull off the upset.

Gamble (TU) – y half with a large bounce forward

Robatin (Pitt) – good double back to open, good leap series, and missed the end because I was distracted by Walker’s bars but seemed to be a hit – 9.875

Buford (Yale) – great jaeger, good straddle back, huge full in dismount and holds on to the stick with an arm wave – 9.725