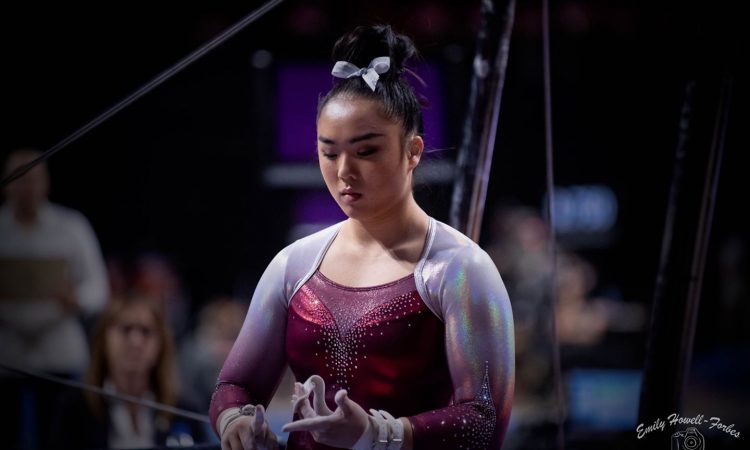 Washington certainly has the upper hand in this meet, but not by such a margin as to allow complacency. The Huskies come in on a high after a 197 at home two weeks ago and a defeat of UCLA on the road, but Stanford was also looking strong until its most recent meet.

Stanford had a tough meet last week as Chloe Widner had to sit out due to a disciplinary violation (we think she’ll be back today) and Madison Brunette had a strange mistake on floor in one of the five routines the Cardinal was able to present.

Perhaps the unifying factor in this meet is a lack of depth: Both have been forced to go five-up on vault and floor once this season. Exciting! For Washington, the great hope is the return of Geneva Thompson to the floor (and hopefully beam) lineup after a bout of calf soreness. For Stanford, the injury list is so long at this point that it’s difficult to see where to find any seventh routines, but athletes like Madison Brunette and Morgan Hoang have worked hard to add events they didn’t compete last year and keep the Cardinal afloat.

Allie Smith is on a

Cole (Stanford): Her usual FTY, solid landing with a hop but some technical gaps. 9.775

Washington (UW): Gienger to overshoot, great, FTDB with a little step forward and an arm swing. 9.8

Brunette (Stanford): Iffy on the table, good amplitude, piked down with a hop back. 9.775

Roberson (UW): Hop change to pike Jaeger to overshoot, holds form, double layout stuck. That’s how ya do it. 9.9

Hoang (Stanford): FTY pikey with a bit of leg separation, chest down on landing but not catastrophic. 9.775

Stanford scratching Garcia in the anchor, which is probably a good plan because that vault is not great.

Nelson (UW): Beautiful first handstand, blind to Jaeger to overshoot, blind full double back with a little step. 9.775 are you kidding me?

Solid start for Washington. Important to score 49+ on vault to set up for floor to bring in a good total. Stanford survived vault, though I still don’t understand some of those scores.

Hoffa (UW): Why is she leading? FTY, tries to anticipate the landing and hops forward a little. 9.8

Copiak (UW): Underrotated FTY, big step forward. Odd. Slow mo shows she blocked very far back on the table, but stayed committed to her body position and couldn’t get it around. 9.675

Waguespack (Stanford): Toe on to Maloney to Pak, weird little foot flex in the middle. Double lay with flexed feet again and a tiny step. 9.75

Widner (Stanford): Over on her first handstand, gets it back, Tkachev. Blind full to bail, closed shoulders, SHE FELL FROM STANDING ON THE LOW BAR, hop on her dismount. 9.1

I have never actually seen someone do that in college. Some near misses, but nobody actually falling.

Brunette (Stanford): Half turn to Deltchev, foot form, to overshoot. Double lay with flexed feet and a hop and step back. 9.675

Thompson (UW):  Big FTY, real commitment to the layout position, step back and then a second to salute.

Bryant (Stanford): Toe on to Tkachev, Pak, lovely, squat on

Her foot slipped, she tried to jump to high early to save it but too far. Off. Gets through the rest, but what? 9.25 crying

Brooks (UW): Yurchenko half on, tuck off, way to the side on the table and nowhere near landing it, more or less safety rolls out forward, smiling as she walks away. That’s a Hail Mary vault and she knows it. 9.3

Micco (Stanford): Jaeger, bail good, blind to one and a half dismount, chest way down and dives forward. 9.55

Guys, I have no takes. What happened there? I don’t know.

Brooks (UW): Double front, majorly cowboyed but drilled the landing, one and a half front lay. Every time I see her wolf full I’m reminded how grateful I am that she has an E pass now and doesn’t have to do the wolf 3/2 hop. Front full front lay good.

Ruttan (UW): Two and a half twist, Rudi double stag and a big rebound into the leap but the landing is fine. Tour jete full is around, double pike with chest a touch forward. 9.825

Hoang (UW):  BHS LOSO, lean and pulls it on with her arms. Straddle jump, front aerial great. Split double stag, leans again and gets it back, one and a half twist with a hop. 9.775

Washington floor dance has a much feistier energy today than I’m used to seeing, it’s fun.

Roberson (UW): Front double full front tuck, just the slightest bit of awkward on the landing but dances straight out. Switch ring wolf full hop, Rudi LOSO and up on her toes a little, can’t tell if she moves her heels. Good one! 9.775 is not cool in the slightest.

Bryant (Stanford): Full turn, BHS LOSO so big that I’m half worried she’ll just fly off the end of the beam but she lands it fine. Beat to standing switch jump, stuck the double back. WOW. Step to salute but like, I don’t care. 9.925 and every bit deserved.

Hoffa (UW): Full in, lunges on her toe so she doesn’t go out. Front full front lay, got the leaps, nailed the double back. 9.9

Has anyone seen a tenth and a half lying around in Maples? It belongs to Evanni Roberson’s floor routine, the judges misplaced it.

Great beam for the Cardinal, a lot to be proud of there!

Cole (Stanford): Two and a half twist punch front, directions all wrong throughout, just about keeps it in with a side scoot. Switch ring switch half. The famous straddle jump, Rudi double stag. 9.775

Washington (UW): BHS LOSO, lean and gets it back wit hher arms, side aerial to beat, switch side straddle beautiful as usual. Side aerial back tuck full stuck with one foot a little in front. 9.825

Lawson (Stanford): One and a half through double back, got it. Tour jete half split full, nailed the last pass. She is SHARP today. 9.825

Ruttan (UW): Side aerial LOSO, big arm swing, holds on. Good full turn, switch split with a question on the splits, one and a half dismount with a little hop. 9.8

Widner (Stanford): Double layout stuck-ish, close to the line so she didn’t have a lot of room to play. Front lay front full, good, double pike and rolls back. Not her freaking day. 9.1

Vandenkolk (UW): Kick front BHS with a little arm adjustment in the middle, switch split quarter. Full turn with an arm swing, front aerial to scale and it’s way off, fights to keep a hold of it, gainer full dismount with an arm swing. Nervy. 9.725

Bryant (Stanford): Full in lovely, front through double pike underrotated with a step forward. Open double back is a beauty as always. 9.875

Brunette (Stanford): Front lay to Rudi with chest a bit low but not bad. Wolf full tour jete full, double tuck with chest down and a little rebound. 9.7

Solid road score for Washington, honestly could have been a bit higher but scoring was up and down all day. Not one Stanford will be excited about to say the least, though cracking 49 on beam is a great accomplishment especially after the nightmare on vault. This isn’t Widner’s first really bad day, and I’d worry for her future lineup spots apart from that as we learned last week, Stanford doesn’t really have much with which to replace her.