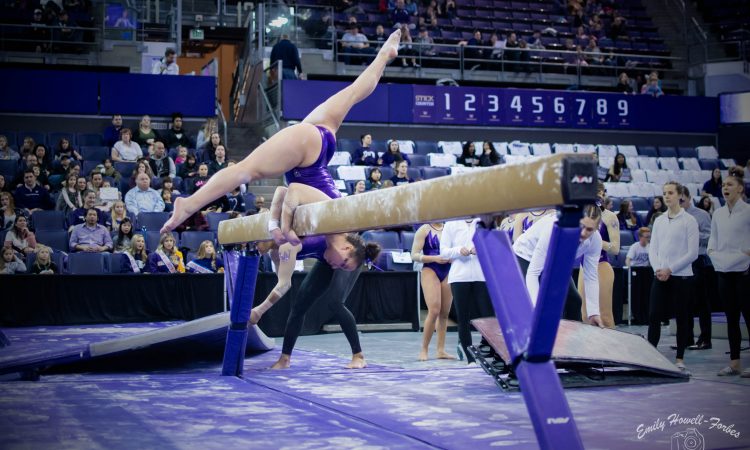 Washington surprised last weekend, soaring up the rankings with the help of scores that improved at around a point per meet. There are injury questions for the Huskies, such as Geneva Thompson’s status with a sore calf that has held her out of beam and floor thus far, and Michaela Nelson’s recovery from a December meniscus procedure; there isn’t a great deal of depth to play with. But when the Huskies were at their best in 2017 and 2018, they pulled regular 197s flying in the face of depth challenges by means of smart routine construction and uncanny consistency. Evanni Roberson and Kristyn Hoffa are better than ever before, and it’s looking like the old playbook is working again.

And speaking of the old playbook—at this point it’s safe to say that Chris Waller’s UCLA is as UCLA as UCLA has ever been. Inexplicable lineup choices, even more inexplicable construction, incredible flair and daring coming from the most unexpected places and a team that, despite our best efforts, we won’t know what to make of until the chalk has settled on Final Four. All we can say for sure at this point is that the 2020 cohort is far from a disaster. I can’t tell you whether they’re more likely to go 195.800 or 198.500 today, but what I do know is that either case wouldn’t have the slightest effect on what happens next week. All we can do is watch it play out.

Tratz (UCLA): Late sub in for Lashbrooke. Her usual, wait, weird little rebound with her chest down. 9.75

Nelson (UW): Jaeger, loses a touch of form on her catch, to overshoot. Giant full double back, hangs on for a second and then hops back. 9.75

Kramer (UCLA): One and a half, low, the knee swivel is shocking but she gets it to her feet. Soft form in the air. 9.775

Washington (UW): Clear hip to Gienger to overshoot, massive. FTDB messy in the air but good landing, little step back. 9.775

Not the best start, not a catastrophe. Some uncharacteristic mistakes from both—could just be one of those odd contrary days.

Hoffa (UW): FTY, feet get weird at the end but stuck dead with feet just a little too far apart. 9.875

Hano (UCLA): Ray to overshoot, blind full double back with a hop back. The way she’s cleaned up that flight combination, especially her legs on the Ray catch, is unbelievable.

Copiak (UW): Nice FTY, good body position, splits her legs in the air with a hop back. 9.8

Kooyman (UCLA): Twitter famous for her squat on now for some reason. Maloney to Pak, leg separations throughout, missed a handstand badly on the high bar, double lay actually not starfishy with a hop. 9.825

Thompson (UW): Huge FTY, almost sticks it. dives her chest forward with an arm swing to try to geet it, holds on but probably lost more than just stepping would have been. 9.825

Ross (UCLA): Maloney to bail to toe shoot, her usual, double lay stuck. Yeah it’s Kyla on bars. 9.925. I wonder if she missed the first handstand, hard to tell.

UW has been hitting the stick drills a little too hard. The Huskies have fought really hard for landings today where they’d probably have been better off just taking a step. But on 196 pace with the weak event out of the way is just fine.

UCLA again good but not the sharpness that we’re looking for. I really want Steele back in this lineup.

Brooks (UW): Double front underrotated, a little lock legged, one and a half front lay maybe close to the line. 9.825

Poston (UCLA): Check on her straddle 3/4, BHS BHS LOSO with ugly legs and falls. One and a half with a step back. 9.1

Ruttan (UW): Two and a half twist, looks good, back with a one and a half front lay split. Tour jete 1/1 looks around with a little spin out, double pike good. 9.775

Cunningham (UW): Front through double back, overrotated, stays in but lifts the front foot and scoots back substantially, turning leaps good. Double pike solid, lunge maybe a little cross over but not a big deal. 9.825

Flatley (UCLA): Front aerial back pike, whoa, that’s different. Side aerial is her usual, split to beat. BHS one and a half with a hop, ten chants lol. 9.95

Shapiro (UCLA): Switch split quarter, BHS BHS LOSO and splits the beam, goes full lemur mode underneath and really tries to hold on but has to drop off. Counting a fall now. Side aerial back full, landed behind people so I can’t tell how she did.

Roberson (UW): Front double full front tuck, not quite her normal landing but fine. Switch ring wolf hop full, Rudi off to back tuck instead of her normal Rudi.

Dennis (UCLA): Nice leaps, oh no, missed her acro series. Retry, falls on the side aerial side somi. One and a half dismount with a hop.

Flatley (UCLA): Front lay to Rudi, little scoot back. Front double full is really solid, I appreciate a proper lunge on a front landing. One and a half front lay with leg form but good landing. 9.95 wow!

Washington (UW): BHS LOSO, hips off line but pulls her hands down and gets it back. Side aerial to beat, switch side to straddle. Side aerial back full, feet apart but stuck. Two down, three to go… surely if Washington goes clean UCLA can’t do anything about it. 9.825

Kocian (UCLA): One and a half, punch looks weird, Rudi actually totally fine. Pretty leaps, double back with chest a little low but stuck. 9.875

Dennis (UCLA): Front lay through double back, I love that pass, her leaps are so special. Front lay front full stuck! Rudi to split wild in the air but gets it done. 9.95

Vandenkolk (UW): Kick front BHS, the slightest lean, switch split 1/4 with an arm swing in the middle, full turn with another arm swing.. Front aerial swing through to scale, she’s always a little tentative but got it. Gainer full with an arm circle. 9.85

Copiak (UW): Full turn, BHS LOSO a touch off. Cat leap switch half beat, great leap but slow connection, side aerial back tuck full stuck. That’s the win for Washington, no way for UCLA to get close. 9.85

Hano (UCLA): Double lay awkward with a scoot back, she’s replaced the running jump with a plain double stag on her second pass. Big scoot back on the double pike. 9.875

Ross (UCLA): Whip double back nailed, love that pass. One and a half front lay, double pike underrotated with a step forward. 9.9

The best part of this whole thing is that UW honestly wasn’t even good. So many weird flukes! But not making big errors was enough against a team that… made a ton of them.