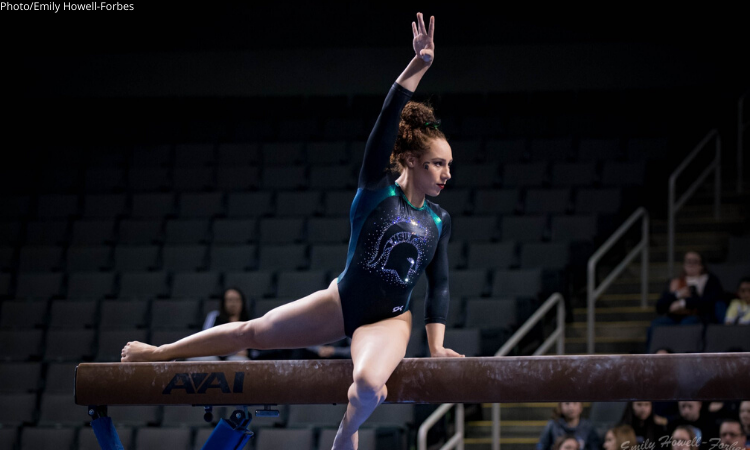 On its face, this meet looks like an easy away meet for the Huskers to get in the bag. They’ve proven they can go 196 already, and have a fine average. The Spartans have been strong in the first two meets of their three-meet homestand. The Huskers’ 195.150 last week at Penn State is lower than both of the Spartans’ most recent home scores, so this could absolutely get interesting.

We’re still waiting to see Kynsee Roby in Nebraska’s lineups, and Gabriella Douglas was not on floor last week for Michigan State. Mike Rowe said he was resting athletes; we can assume she’ll be back for this big conference battle.

Injury updates: We saw Kaylee Quinn (UNL) in a knee brace and on crutches last week. Ryanna Head (MSU) was in a boot.

If you’ve been with me for BTN+ meets before, you know the drill. There’s absolutely no chance this thing starts on time.

Alrighty while we wait let’s talk Taylor Houchin and vault. Here’s my thing. She sometimes has the tiniest, tiniest!, hip angle, and I can see where judges pull that .050 to go 9.950 (or 9.975 if only one does). I get the deduction. Pretty identical vaults get 10s, though. So, you know, it’s frustrating. She did her usual gorgeous stuck Y1.5 warming up per Nebraska’s Instagram Story, so we’ll see what happens. 10s have been flying in the Big Ten so far. I won’t be furious if it doesn’t happen because of that teeny hip angle, but I won’t be mad if she gets it, either, because of the comparable vaults that do.

Here we are, at the hour, and the feed isn’t up yet. Classic. I’ll guess they’re starting march in now, we’ll get the feed in five or so minutes, and first vault will come in right around 15 past. SECN needs to hold a “producing gym meets” bootcamp.

11 after the hour and weeee haaaave videoooo! Nice. Let’s roll.

MSU is going to go five-up on vault. Eyes emoji.

Five up for MSU is interesting, but it wasn’t too rough. Really nice fulls, just some landing and hip angle work. That’s a great start for Nebraska, on an event that can be a problem. The Huskers will be happy with it.

ATTN: ROBY IS IN A LEO AND TIGER PAWS.

Raybon (MSU): Hect mount. Blind to pike Jaeger to bail, loose in her core a touch. Blind let sep to giant half toe on front pike, step back. 9.825

Wow, Nebraska. Those 10.0 vaults were all lovely. It’s great to see a competition routine from Roby, as well. The Spartans looked good on bars! Nice hits all around. For them, this event will be about cleaning little details, like leg separations and late pirouettes, moving forward. Really strong for January, though.

Don’t know how many other gym/NBA fans are out there, but just in case you’re reading, TMZ reported that Kobe Bryant has died in a helicopter crash. Other outlets have started reporting, so it seems real. Feels very shocking.

Anyway, apologies, back to gym.

Curtis (UNL): Double pike, big step back. Good landing on combo pass. Switch ring to tour jete was mostly behind her teammates, so I didn’t get a good look. Double tuck, lunges forward but controlled. 9.75

de Jesus (UNL): Double tuck, very high, good landing.3/2 + front lay, little bit of a stutter step out. Good leaps. Double pike, her feet were behind someone on the landing, but good in the air. 9.825

Raybon (MSU): Standing loso, good. Beat + Straddle 3/4 check with an arm wave.Side aerial, big check and didn’t connect, that should be her series. Side aerial RO check. There we go. Front 1/1 stuck. 9.30, I’d guess a SV issue around the series.

Mitchell (MSU): Bhs bhs loso, so solid. These MSU series are so strong, not a wobble to be found. Front aerial, some knee softness in her back leg. Strong jumps. RO 3/2, feet a bit far apart but stuck. 9.725, hmm, the jump connection, I think.

Hassel (UNL): 2/1, great landing. 3/2 + front lay stuck cold. She was nice in the air, too. Some imprecision in the rotation on her jumps. FHS rudi to straddle, jump moved back more than up but she held the landing. 9.9

Douglas (MSU): One of my favorite beam sets in the NCAA coming at you! Aaaand we’ve got a judges conference. OK, here we go. Double turn, lovely. Side aerial loso, good. Swtich 1/2 to split, good, bit of a pause between, but not too long I don’t think. Side aerial 1/1. 9.,875

Piringer (UNL): Double tuck, very high, slid her front foot on the lunge. 3/2 + front lay, there’s the landing she wants. Switch side popa, good splits, not the strongest rotation. Double pike, good landing on that one. 9.875

Jackard (MSU, exh): we cut away for replays of floor. OK we’re back. Cat + side aerial to beat, not really connected to the beat.Gainer 1/1 off the side, stuck.

Johnston (UNL, exh): Double tuck, good landing. Her first set of the year! She had been injured. Double pike, another strong landing, some leg sep. Nice jump rotation. Barani to 1/1, stumbled back a bit, about .2 worth of foot movement, I’d say.

MSU had some funky things going on there with SV/CV issues. That beam total is not indicative of how clean and tidy the Spartans look on beam; look for some of those stumble steps to get cleaned up and for beam to be a highlight for this team. Nebraska is strong on floor, with a few funky things to clean up as well. The Houchin OOB and some slidey feet should be focus areas.

Lol there’s another judges conference. I imagine chatting about the MSU SVs. Let’s get this moving folks.

I revisited Raybon’s, the issue is the side aerial repeated a third time. She didn’t get the bonus connection she needed going into the dismount.

de Jesus (UNL): Hereeee we go. Straddle to sheep, legs apart, step back. Cat + side aerial, very steady. Check on her full turn. Cartwheel 2/1, stuck. We came in late and missed her series. 9.85

Smith (MSU): Front through double tuck, just some feet form in the air. Camera too zoomed in on her jumps to see much. 3/2 to front lay, very arched and a small hop. Double pike, deduction free landing. 9.85

Verceles Carr (UNL): Side aerial, very nice. Bhs loso, some soft knees. Split + split 3/4, nice positions. Cartwheel 3/2, feet a bit far, had to pick up a foot a little to touch her heels. 9.95, I agree with that she was stellar.

Bellmore (MSU): Double pike, movement in her front foot on the lunge. Leaps had good rotation. 3/2, some leg form. 9.825

Houchin (UNL): Aaaaand a judges conference! Oy. Houchin can get in her head, so this could throw her off. We’ll see how she handles the wait. Bhs loso, completely solid. Front aerial small check. Switch, big leg up check. Split to split 1/4, check. Hitch to side aerial. RO 2/1, step back.

Hofelich (MSU): Big double pike, stellar landing. Nice positions and rotation on her leaps. 3/2 to front lay, some leg sep in the air, good landing. Double tuck, jumps a bit into the lunge. 9.9

Thaler in exhibition for Nebraska, but this meet has been so long that I have to go! I’m sorry! Same re: Raybon on floor!

Phew! Both teams will be thrilled with these totals! Nebraska needed a 197 to join the big kids’ club, and the 196 will help the Spartans make a case for a place the top half of the conference.