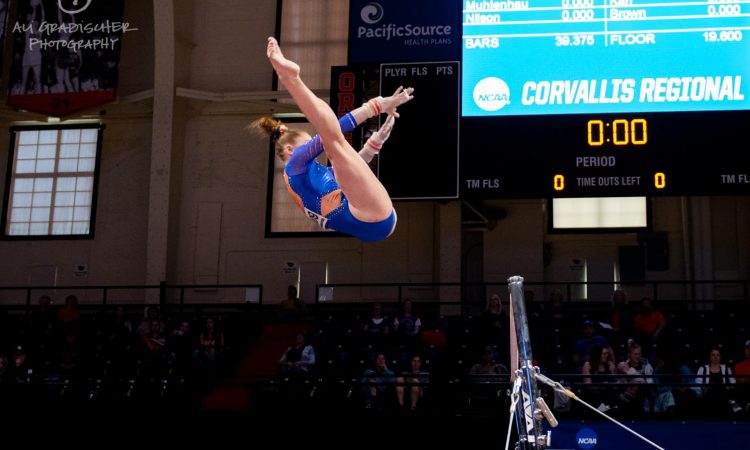 UCLA likes to bracket its home lineup of conference meets with a funky non-conference at the beginning and end, and this is a really interesting to open the season—and Chris Waller’s head coaching career—in Pauley. There’s a lot we don’t know about Boise State this season, and I certainly wouldn’t categorize this meet as a serious upset risk—but it’s not a cake meet either. UCLA will have to lift its game from last Saturday’s erratic showing in Anaheim to feel secure.

A great deal of the trouble last weekend came from Waller’s daring lineup choices, and anxious Bruin fans will be hoping for some of the normal order back. While Margzetta Frazier made a very respectable job of her all around debut and might stay there, replacing Norah Flatley in the beam lineup in favor of Kendal Poston or Felicia Hano is one of several likely swaps. We’re also not exactly certain of the statuses of Sekai Wright or Madison Kocian, or how much Nia Dennis’ still-torn labrum will restrict her from bars and beam this year.

Meanwhile, Boise State is still grappling with the loss of a consequential senior class, and a recent intrasquad gave the impression that the Broncos are quite short on routines. That said, travel schedules may have impacted that meet, and we’ve seen a lot of exciting options from underclassmen in training. Senior Courtney McGregor certainly isn’t afraid of the bright lights and might be able to snag a vault title if the Bruins are still shaky on that event.

Sounds like Felicia Hano will sit out tonight, working through an ankle injury.

UCLA is wearing its 2019 senior night leotard. Uh oh, BSU is going five up on bars.

Bruden (BSU): Blind to Jaeger, soft knees at the beginning, bail. Question on a handstand on the high bar, pikey double layout with a hop. 9.825

Nilson (BSU): Clear hip to Tkachev, nice work, bail. Double layout on the lower side but good and stuck. 9.85

Kramer (UCLA): One and a half, soft legs, really tried to get it but has to take a stagger back and sits. 9.175

McGregor (BSU): Maloney with leg split to bail, FTDB with a messy legs and a hop back. 9.875

Hano (UCLA): One and a half, good, hangs onto the stick for a second and then hops forward. 9.825 seems low unless I missed something.

Muhlenhaupt (BSU): Blind to Jaeger to overshoot, turnover on the release just lovely. Double lay deeeeeep but stuck. Dug her toes in there. 9.925

Not UCLA’s best, Boise did a great job pushing through only having five athletes. A lot of really clean gymnastics in that rotation.

Hano (UCLA): Ray to overshoot is one of her cleaner ones, blind full with a little leg split to double back. 9.825

Steele (UCLA): Maloney to Pak great, wait, too close and back hip circle. Casts back up, double lay good and stuck. Well, she messed up almost nothing except the big one. 8.95

Smith (BSU): Soft soft elbows on the table but lots of distance. 9.75

Kooyman (UCLA): Has had to sit around awhile because the judges had a good long argument about what to do with Steele’s score. Maloney to Pak, leg separation on both, double lay good with a hop back. 9.8

McGregor (BSU): Badly lost in the air, something might have gone wrong on the table, and lands on her back. Grabbing her calf, unsure if she’s okay. Might just be a cramp. 8.6 vaguely surprised they didn’t zero that, not that it matters too much.

Flatley (UCLA): Eagle into Jaeger, nice, getting through clean. Double lay with a few quick steps back, it was fine she just didn’t anticipate the landing well enough. 9.8

Bruden (BSU): FTY low with a hop to the side but what she needed to do in the context. 9.8

Really hope McGregor is okay, that was a strange miss. It was such a weird missing piece in Ross’ career that she’d never gotten a home bars 10, so it’s only right that she got it here.

Nilson (BSU): Double pike with a scoot back, switch side Popa with questionable positions and a hop out. One and a half front lay, front lay to Rudi well done.

Frazier (UCLA): Switch to straddle, lands in perfect cross position on the beam. Front aerial back tuck with an arm adjustment… borderline on creditability. Full turn, tiny adjustment, side aerial to beat. BHS double full with messy legs and a hop back. 9.825

Smith (BSU): Double pike, I think this is to Ariana Grande? double tuck with a step forward. Tour jete half to I think split full, missed a punch front on her third pass and scrambles to avoid sitting. I think she just avoided it being called a fall but we’ll see what they do. 9.0 guess not.

Hano (UCLA): BHS two foot layout, one foot way off and falls. Missed it last week too. Switch half with a check, one and a half twist good with a small hop. 9.0

Popp (BSU): Double tuck, big lunge back. I adored her in level 10, excited to see what she can do today. Switch ring switch half, scoot back, double pike with a hop. Her choreography is pretty eccentric. One and a half to layout underrotated, narrowly avoids sitting it. 9.45

Flatley (UCLA): Good to see her back here. Front aerial, slight adjustment, front aerial. Side aerial, L turn split jump, one and a half dismount with a hop forward. 9.35 Yeah they took that acro series and they weren’t wrong to.

Elkabchi (BSU): Two and a half twist, strong, switch side to Popa, strong landings throughout here but some work to do to settle into college performance, she looks nervous and reserved. 9.775

Sakti (UCLA): LOSO LOSO and off. Switch half, side somi nervous, side aerial back full good. Oof, UCLA. Not good. 9.375

Amado (BSU): The Queen routine! I love this. Double back, a little overrotated and shifts her front foot. Switch ring switch half, combo pass good, double pike deep but makes it work. 9.725

Bruden (BSU): Double pike, big lunge, switch ring switch side. One and a half front lay, double tuck and almost sticks it! Good one. Apparently she has three closets…. 9.8

Popp (BSU): Swing under the beam to front support, love, front aerial great. Switch half made the split, BHS BHS two foot lay NAILED. Full turn, cat leap switch side great, BHS BHS one and a half twist. She used to a double back dismount, maybe she’ll get brave and bring it back.

Tratz (UCLA): Full in messy in the air but great landing. Switch ring tour jete half, one and a half front full stag jump. Double back a touch underrotated, lunge forward but not bad. 9.925 a little generous.

Elkabchi (BSU): Full turn, BHS LOSO pretty. Beat jump side aerial great, switch straddle quarter. AERIAL ROUND OFF YES. Straddle half, one and a half dismount with a big step forward.

Lashbrooke (UCLA): Subbing in for Flatley. Double back, big with a scoot back. One and a half front lay is great, tour jete half? to Popa. Double pike looks a little low but lunges out fine. 9.875

Masiado (BSU): Y turn starting from one knee, really cool and really good. BHS LOSO with a little adjustment. Switch switch side beat, side aerial tuck back full with a hop back.

Frazier (UCLA): Almost goes half in half out and it’s CLEAN. I’m used to seeing leg mess on that pass but she’s cleaned it up a lot. Side somi thru double back good, landed a touch lock legged but recovered and lunged immediately. Strong leaps. I think that was a tour jete full Popa, Double pike, back heel on the line. Don’t know if that was flagged. 9.95 guess not.

Muhlenhaupt (BSU): BHS LOSO strong. Full turn, switch side,  straight leg side somi or a side aerial with a pivot, can’t tell which. One and a half twist with a hop. 9.875

Beautiful and unique beam rotation from the Broncos.

UCLA manages to stay ahead of Minnesota in the rankings, but a lot of technical concerns, especially with acrobatic series on beam. There’s a lot to fix before the Bruins can contend with Oklahoma and Florida.

Boise State doesn’t have much depth to begin with and potentially losing McGregor is frightening. But there was a lot to be proud of in their technical bars and unique, daring beam routines. The Broncos pulled together a decent team score and will be ranked in the low 20s on Monday.