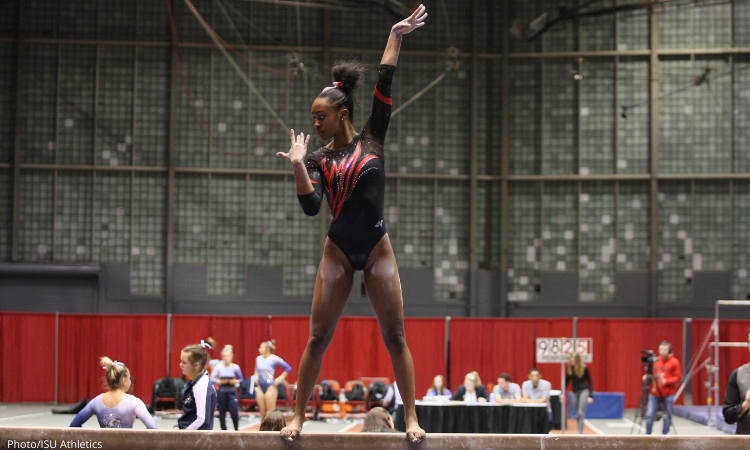 Illinois State got its 2020 season officially underway on Saturday, hosting New Hampshire in a MIC vs. EAGL clash. The Wildcats looked sharp, posting a 193.400 to easily beat the Redbirds’ 189.050, although Illinois State was dealing with a multitude of injuries heading into the weekend.

Sophomore all arounder Mia Quigg was limited to only bars, three-eventer Savannah Remkus was only able to compete beam, junior Cameron Topp was slated to compete on floor but had to scratch after beam and senior all around leader Gabrielle Cooke had to withdraw from the meet after tweaking an ankle during warmups. Thankfully, amidst all of the injuries, a new star emerged for the Redbirds in freshman Angelica Labat, who won the all around and bars in her collegiate debut while also posting scores among Illinois State’s top two on every event.

“It feels really good; I didn’t think I was going to win,” Labat said. “I just wanted to hit four-for-four for the first meet.”

Labat scored above a 9.700 on three events, with vault being her only score below that mark. She debuted a Yurchenko one and a half, the first 10.0 start value vault for the Redbirds since the Yurchenko full was downgraded a few seasons ago.

“I’m very happy with my beam, but I need to work on my vault,” Labat said. She came in slightly short on the landing and had to take a few steps to stay on her feet, resulting in a lower score of 9.625.

Head Coach Bob Conkling credits Labat’s unsatisfied attitude in the gym to her success in her freshman debut, while also saying that she’s “just really good.”

“She’s not satisfied with bad routines or bad turns; she’s hard on herself,” Conkling said of Labat. “If things aren’t going her way, she’s tough on herself, and that’s why she’s good.”

The Redbirds will try and turn things around next Saturday in East Lansing, Michigan. There, Illinois State will compete in a tri-meet alongside Central Michigan and host Michigan State.

READ THIS NEXT: LIVE BLOG: No. 35 New Hampshire at Illinois State