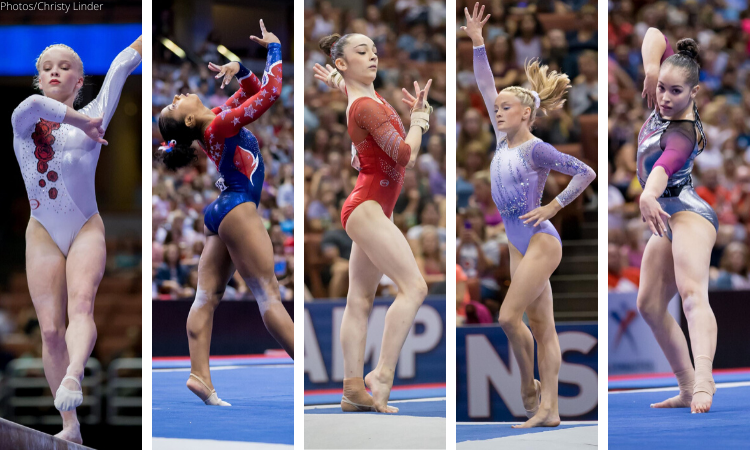 Despite the national letter of intent signing period extending from November 13 all the way until August 1, 2020, the initial wave of commitments is slowing down. But with most recruiting classes essentially filled—with a few key exceptions—we thought we’d take a look at where they all stack up.

Note that we are only considering gymnasts that have officially signed NLIs or are confirmed walk-ons and not those we’re expecting to sign at a future date. We’re also only considering teams’ recruiting classes to be gymnasts who signed on to compete for the 2021 season, so, for example, Morgan Hurd (projected to join Florida for the 2022 season) and Luisa Blanco (joining Alabama in January 2020) are not included.

Even without Moors and Padurariu having signed yet, UCLA will enter with the best freshman class on paper. Jordan Chiles is probably the most well-known by gym fans, having competed at the elite level for years and most recently at world trials. Frida Esparza spent time as an American elite before changing nationalities to Mexico, competing for that team at the world championships this year. Emma Malabuyo, once touted as the next big thing as a junior, has had a rocky road as a senior in terms of injuries and setbacks. She signs to UCLA a year earlier than expected. But probably the most exciting member of this class is junior Olympic powerhouse Chae Campbell, with a perfect 10 on vault already to her name and level 10 career high 9.850 on floor to go along with her third place all around finish at nationals in 2019.

If Moors and Padurariu sign as expected, this class will be unstoppable entering the 2021 season—and for good measure considering it has to replace the likes of Kyla Ross, Madison Kocian, Gracie Kramer, Grace and Anna Glenn and Felicia Hano. Do note that, while she was expected to join UCLA, Madsen no longer mentions the Bruins in any of her social media bios and does not follow the team. Her plans at this point are unknown.

It seems like we’ve been waiting about 10 years for Bryant to be of college age, and the time is finally almost here. Rejoice! Bryant already boasts lineup ready routines, if not lineup anchoring routines, on each event and is poised to be one of the Tiger greats during her four years in Baton Rouge. Add onto that two former elites in Arenas and Dunne and you have yet another strong class for LSU that, as of yet, isn’t even pulling from a future year to round out its prospects.

Though there’s still some risk that Jade Carey never makes it to Corvallis, if she does, it’s hard not to imagine immediate stardom. Her recent addition of bars to her elite repertoire confirmed for many elite fans what her level 10 adherents already knew—that all things being equal in terms of difficulty, she’s actually a very balanced and clean all arounder and can produce huge scores on any event. Sydney Gonzales from Wildfire is the younger sister of current Beaver Lexie, and she also excels on four events, pushing close to the coveted 39.000 in level 10. Ariana Young is a powerhouse with a deceptively polished beam routine. Oregon State habitually recruits talented gymnasts who haven’t reached their full potential yet and develops them through their college careers, but don’t expect too many growing pains from this exceptional cohort.

Denver fans, you can stop holding your breath: The Pioneers are finally looking at a season with more than 13 gymnasts on the roster! There have been some recruiting shuffles in this cohort, with Thompson briefly switching to West Virginia and then back and Hutchinson having previously committed to Florida, and it’s good to see strong and competitive recruiting from a team that often has barely enough depth. There really is no weak link in this exceptional group—and what’s more, the only gymnast departing after the 2020 season will be Maddie Karr, so Denver will have more routines than it knows what to do with in 2021.

There are no brakes on the Cal recruiting train—what for any other team would be a game-changing signing period is just normal for the Bears at this point. It’s hard to overestimate what this group is capable of. Gabby Perea needs no introduction, and the elite stalwart finally seems to be healthy again. Andrea Li is arguably the best level 10 gymnast in her graduating class, with only LSU signee Bryant reaping comparable results. All of the six will contend for lineups, and even the sleeper recruits are incredibly stylish. What’s more, Cal will likely only graduate a few routines this year, so expect its depth to be tremendous in 2021.

On first glance, this class is elite and is one that will stand out upon entering college. However, when doing a deeper dive, the injury and consistency histories of its members give us pause. While we think each gymnast has the potential to be an absolute star not only at Utah but in the NCAA as a whole, they receive a slightly lower overall ranking due to those question marks. Prove us wrong!

Also, we know Jordan is almost certainly no longer planning to attend Utah, but since we haven’t heard any official news to the contrary, she is still listed in the not yet official section.

It’s a strong class in its own right that will be made even stronger should the likes of Gallentine and Jones make things official in the coming months. The deferral of Hurd to 2022 hurts the ranking a bit, but with lighter training hours and less difficulty, McCusker should shine should she stay healthy. Add on Lazzari, who is not only a former junior elite but J.O. national champion in the all around from 2019, and Florida is set to continue its pipeline of strong freshmen for the 2021 season.

Bauman is a two-time Nastia Liukin Cup competitor; she finished seventh in 2015 and won the junior division in 2017. She also has eight J.O. national titles to her name, including two all around wins in 2016 and 2018. She shines on bars and beam especially. Morrison, who switched her commitment from Oregon State in July, is an exceptional all arounder with special strengths on vault and floor. She finished fifth in the Senior C division of this year’s J.O. nationals, adding a fourth (tie) on vault and second (tie) on floor. Guggino, who also switched her commitment (Eastern Michigan), adds consistent vault scores to the mix. Confirmed walk-on Mulligan has had consistent scores on vault and floor throughout her J.O. career.

It’s been interesting over the last few years to see Oklahoma recruiting pivot toward accepting walk-ons in UCLA-like quantities. It’s hard to make sense of this huge class, since it contains so many decent but not incredible routines, but Oklahoma typically develops those so well. Former elite Davis is an obvious pick to compete regularly, as are LeVasseur and former Nebraska commit Meilin Sullivan, but many of these athletes will likely never see a competition lineup.

This class is more subtle than what Auburn typically recruits, with a notable lack of a single star all around prospect, but it’s still quietly excellent. Hollingsworth is a U.S. elite who has had some consistency issues but could excel with less difficult routines. Brooke Butler is a former elite and a perfect 10.0 prospect on bars. In 2021 the Tigers will be facing the prospect of replacing a lot of clean mid-lineup routines, and this technical and elegant group brings a wealth of 9.850-plus options.

Knight is a big get for the Illini. The England squad elite will be the team’s first Brit and only third international. While she has had some inconsistencies, her level of gymnastics is valuable to a team trying to break into the national conversation. Mueller is a late add; she changed her commitment from Minnesota to Illinois in early November. The 2017 Nastia Liukin Cup competitor finished seventh in the Senior C division at this year’s J.O. nationals. Morgan brings a litany of strong vault scores, something the Illini desperately need. Expected walk-ons Ewald and Resch each bring a standout event in floor and vault, respectively. In all, this group is formidable.

Courtney Kupets has done it again. She’s emerging as one of the country’s most competitive recruiters, and nabbing elite Victoria Nguyen for the Gymdogs is by far the biggest story of the gymnastics offseason.

She’s a similar recruit to Sabrina Vega, who also came to Georgia at the tail end of an elite career that was long and successful yet also frustrating. Like Vega when she signed, there’s an air of mystery surrounding Nguyen because we’ve seen so little of her recently that we don’t really know what she’s capable of—but she’s healthy and doing clean gymnastics in training, and given her talent level that’s enough for Georgia to work with. Don’t sleep on the others, either. Katie Finnegan, who joined early from the class of 2021, is reliable and understatedly excellent while powerhouse Nhyla Bryant will reduce the blow of graduating two critical routines each on vault and floor.

Walker is the big name in this crew. The Texas Dreams former elite appears to be walking on, which raises questions about her current health given her injury history. That said, a healthy Walker could elevate the gymnastics on this team across the board. Cross, who comes from collegiate feeder powerhouse Hill’s, finished seventh on bars in the Senior D division of this year’s J.O. nationals. She brings strong scores on beam and vault as well. Former elite Johnston, also from Hill’s, finished third in the all around at the 2018 American Classic, adding a second-place finish on vault. She is a 2019 Nastia Liukin Cup competitor and finished second in the all around and on beam in the Senior B division at J.O. nationals. She is absolutely the star of this class and has the potential to be a stellar collegiate athlete. Mace, graduating early to join this class, has very strong bars scores throughout her J.O. career. Expected walk-ons Ayers and Gore each bring strong potential across all four.

Garcia, a former junior elite and Hopes gymnast, competed in the 2018 Nastia Liukin Cup and tied for sixth in the Junior F division at 2019 J.O. nationals. She has high potential across all four events, with J.O. highs at or around 9.800 on each piece. German is the 2019 Michigan state beam champion and will be an asset there. Harkness is also a former junior elite and competed level 10 as early as 2014 when she won the J.O. Junior A all around title. Her strength is bars, where she won the Senior C region five title with a 9.800. She added titles on floor and in the all around with a huge 38.225. Expected walk-on Pritchard is strong across all four and is extremely consistent. She will be an asset in any lineup.

We know this is a little bit of a wildcard pick, but hear us out. Airborne’s Kaitlyn Lyle is Davis’s best recruit since Kelley Hebert, with whom she will overlap by one year. Lyle is a good bet to compete the all around, but she will stand out most on bars and beam—which have each broken 9.800 in level 10. She also wore a horse face mask for part of her signing party.

What, you’re not sold based on that alone?

Clubmate Emma Otsu reliably produces scores in the mid to upper 37s, occasionally higher, and the reigning Region 1 beam champion is beautiful to watch. Marisa Laird is an ultra-consistent beamer with great technique of potential on other events. Even more remarkably, UC Davis currently has no seniors whatsoever, so this extraordinary class will be added to the already very strong roster.