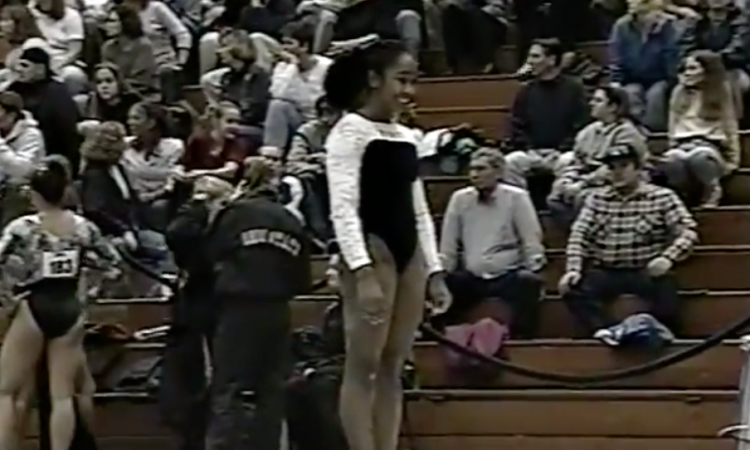 Today marks just over four months since conference championships weekend. I was supposed to go to Big Tens to cover the meet, but a freak illness intervened. I’m still not over it. And since I’m a masochist, I decided to indulge in my lingering FOMO by going back to a championship from another life.

Just like this year’s Big Tens, 2000 saw the meet held in Rec Hall at Penn State. If I squint hard enough, I can pretend I’m actually there. Great.

The famous Steve Schlanger and Wendy Wilkinson are our commentators today. They’re so famous I had to look them up to see exactly who they are. Looks like Steve has done lots of other sports ranging from baseball to golf, so he’s totally prepared to dissect gymnastics.

Here’s a look at rankings back in the day.

In addition to the ranked conference teams, we’re also told to watch for Michigan State and Ohio State, the latter of whom beat Oklahoma the week before. The Sooners were ranked just 11th at the time (yes, there’s an extra 1 there), but it was still an upset.

Old vault alert. Might have just dry-heaved a little. We’re still six months away from the 2000 Olympics, in which some minor, inconsequential issues resulted in the downfall of this model.

In the first rotation, “Ohio State occupies the bars.” In other words, they won’t leave unless forced. Here’s their leo today.

What better uniform for an occupation? I’m surprisingly into this leo, though it’s certainly not getting any points for school spirit. Let’s take a look at MSU.

A far cry from College Gym News’s favorite leo of 2019. I have no words for how boring this is.

Here’s Illinois with a crushed velvet fantasy. I think there used to be a law that prevented schools from putting their name on leos in a font you could actually see from far away.

This is one of the longest, jerkiest mounts I’ve ever seen. She looks like she changed her mind halfway through as to which way she wanted her legs to go.

So, the broadcasters don’t seem to care about who exactly it is performing on each event. Instead, they refer to each gymnast by the name of her school. I thus have no choice but to congratulate [unnamed Michigan State gymnast No. 1] on a nice leadoff routine.

Love this combo from [unnamed Iowa gymnast No. 1].

“Most schools count the beam as their weakest event.” A statement that is definitely backed up by plenty of empirical and statistical evidence.

Love that this routine has a built-in break to sit down. Iowa pushing the envelope with floor choreo, even back in the day.

Let’s check in with tOSU.

FTDLO alert. Didn’t get it but love that she went for something unique (both the skill and the short hairstyle). Spoiler: not the last big skill we’ll see this competition.

Looks like [unnamed Illinois gymnast No. 2] pulled off the impossible feat of not allowing her butt to touch the mat here. She’s ready to throw a Produnova based on that execution.

Speaking of execution, it hasn’t really been there for MSU on beam so far, but I love that they go for cool leap combos. Case in point: this absolutely bang-on connection from [unnamed MSU gymnast No. 3].

Wait, what’s this? Does one of the gymnasts have…an actual name? I’ll believe it when I see it.

Say it ain’t so. Now if we could just remove the other individual in the picture…

Alright, seems like the crazy idea of referring to gymnasts by their names is starting to catch on. Up for MSU now is Melissa Green.

“Here comes her gymnastics series.” Because everything up to that point was just trotting around on the beam for fun.

That just went further and further off the rails and didn’t stop.

You know Iowa was staying lit on the sidelines, even back in the day. The gymnast clapping is me congratulating myself for completing the most mundane of tasks.

Just now noticing the back on Iowa’s leo, which I wasn’t going to comment on at all because the front was so dull. But this is nice. At this rate, I wouldn’t be mad if Iowa scrapped every new design from the last two years and had just worn this every meet.

^^ Actual footage of girls hyping up random strangers in the club bathroom.

This is a pretty good leo, but I would’ve liked to see a different font for “Penn State.” That used to be the school’s logo, but it’s been phased out—for the sole reason, I’m told, that it looked bad on leos. Gymnastics’ impact >>>

So Bev used to ROCK that “may I speak to your manager” haircut.

Also, why does “Bye 1” look like it was written as part of a Revolutionary War era love letter?

Good correction over at Minnesota.

Love that this coach is not only wearing a senior prom-esque boutonniere, she’s wearing two of them.

Better look at Michigan’s leo. I like the collar a lot.

Loving Penn State’s music selections for floor. My dream is for a team today to do an entire floor lineup with “throwback” music. If it doesn’t include this rendition of “Nasty Boys,” I’m rioting.

Also, I’m rolling because this is the second time Steve told us we were going to “Michigan on the vault” only for the camera to immediately cut to another team and event. This time it’s Minnesota’s Judy Cavazos, who’s from Mexico.

Michigan standout Sarah Cain delivers one of only a handful of Yurchenko-style vaults we’ve seen so far. Also, Nebraska is probably the last state I would peg to have a town called “Grand Island.”

Okay, this is cute. Penn State’s Heather Duggan is performing to a Ricky Martin track, and Steve just told us Ricky was set to perform in State College later that year. If a meet-and-greet didn’t happen, someone needs to retroactively set that up.

I like to think that that corner was too hot for her to stand on, which would explain the speed of her grapevine-style run across the floor.

End of rotation reflection: It’s not a secret that I don’t love throwback leos. But what really repulses me is throwback warmups. For one, they’re super baggy. And what is with these designs? Penn State, are you a gymnastics team or the hazmat squad?

Let’s move onto rotation three before Penn State gets called to assist with a toxic waste spill.

We’re told that Rec Hall has been used as a venue for Olympic Trials in the past. Looked it up to confirm that it wasn’t for gymnastics, but a cool fact nonetheless. I’ve been there before for other sports, and it has an iconic feel to it.

You know what else is iconic? This outfit.

I’m all about looks that can be versatile. This coach could be roleplaying as a detective or corporate executive and you’d never know the difference.

Dang, this girl can swing. That was so much power on the first cast, she could have done a giant. Michigan’s Amy Kuczera, everyone.

Hoooooo boy, that wasn’t scary at all. But Wendy says it was just “a little bit of a mistake,” so everything’s fine!!!

Another interesting moment. Honestly not sure if this was supposed to happen. A punch front into a sit-down position would certainly be unique, but I don’t think your butt would thank you after that.

Also, the theme of this routine HAS to be the third class passengers dancing in “Titanic.” You guys have to listen to this music.

OMG it just transitioned into Andreea Raducan’s 2000 music. This girl is psychic.

Another international gymnast, this one for Penn State! It’s Gemma Cuff from England. She has maybe one of my favorite vault runs ever. Giving me Alexa Moreno vibes.

So I guess we can’t have nice things with names because Wendy just realized halfway through this floor she’d named the wrong gymnast. You had just stepped it up so much.

“Looks like she just…dropped onto the ground there.” Wendy has a way with words. Alliteration.

Here, we heard Steve say “and now to Illinois on the beam” immediately as the scene cut to something else. That’s it. That’s the routine.

If this was a leo rankings post, we’d need a bonus category for this coach’s hair.

So I think that’s the Minnesota M on the back? I can’t really read it but it’s giving me all the “vintage sweatshirt you got from the bargain bin because it was a dollar and looked comfy” vibes.

We’ve seen the many creative ways gymnasts incorporate braids into their hairstyles now, but I think just a straight braided ponytail like this would be refreshing.

Just now noticing this random piece of wood. You never know when you might need to do some carpentry during a meet.

And, in another coach outfit news flash, we have an Ohio State one rocking this bohemian ensemble.

We learn that there was a point this season when the Penn State gymnasts had to take shelter in a hotel lobby during a tornado in Alabama. How was your day?

Being as happy and carefree as Phaedra Dixon in this moment? Couldn’t be me!!

“After that 9.9 from Nikki Smith, I bet they all wish they could be California girls.” If you were born in California, you get high bars scores. Born five minutes from the border in Oregon? You’re out of luck.

LOL Steve is advertising a PSU men’s basketball game as if any of us actually lived near State College or would actually go. Have you forgotten what fanbase this is?

Sorry to keep harping on these warmups, but I’m just now noticing that MSU’s logo here looks vaguely like that of a chain restaurant advertised on the side of a highway. A very specific comparison, I know, but I can’t shake it.

We learn that Melissa Green enjoys writing poetry in addition to gymnastics. She tied MSU’s school bars record the week before this meet. How’s that for poetic justice?

“If you get a 10, you’ve definitely earned it.” Oh, Wendy. I wish I had your level of optimism. Foreshadowing?

We interrupt this broadcast, in its final moments, for a shot of this truly patriotic member of the crowd.

Ten for Penn State’s Nikki Smith on beam to end the meet! And bonus points for channeling Laney Madsen.

But it doesn’t matter because they won the the meet with a Big Ten record score. Final standings:

Obviously, this is an interesting group of ” big ten” teams in that there’s only seven. Hoping that even the numerically challenged readers like me realized this from the start. If you’re wondering re: the whereabouts of Nebraska, Rutgers and Maryland, they’d join the conference in 2011 (Nebraska) and 2014 (Rutgers and Maryland).

Fun fact to end: Only one Penn State gymnast has scored a 10 on beam since Smith; her teammate Katie Rowland, who was just a freshman at this meet.

Let’s have a parting shot of the commentary team and the happy winning coach. Oh yes, everyone is so happy. Happy happy happy.

Also, everyone pray for Steve. Nothing’s wrong with him; he’s just spending his time these days covering cycling.