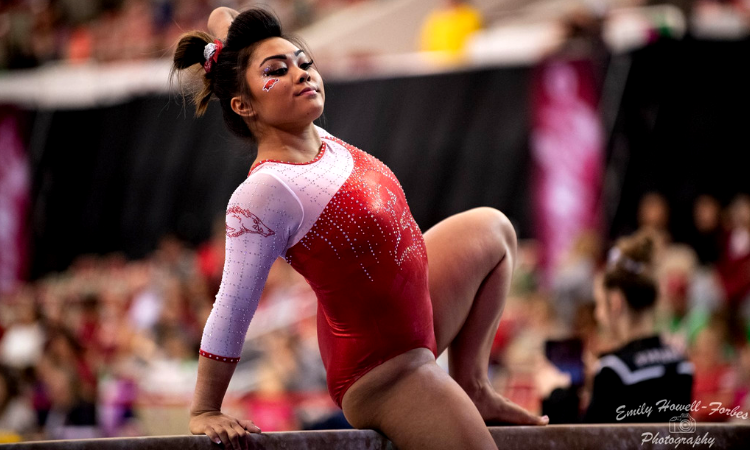 Just over a month ago, Oklahoma capped off an undefeated regular season by winning the program’s fourth NCAA gymnastics championship in the first “Four on the Floor” team final. Now with the 2019 season behind us, it’s time to take a look at which teams will be the front runners for the 2020 title.

There are surely more transfers, coaching changes, unfortunate injuries and retirements coming in the seven months until the next season begins, but these rankings are the reflection of what the Gymternet is currently aware of.

Head Coach Chris Waller will have one of the most talented rosters in the NCAA in his first season as the leader of UCLA. The Bruins are losing Katelyn Ohashi’s 10-worthy beam and floor routines, as well as a second beam routine from Brielle Nguyen, but that’s it. Macy Toronjo and Stella Savvidou are both returning for fifth-years, and UCLA is also bringing in a five-member freshman class that includes Kalyany Steele, as well as Mexican national team member Frida Esparza. Has a first-year head coach ever won an NCAA championship before? This might be the year it happens.

After missing the NCAA championships completely last season, the Gators will be extremely motivated not to let that happen again. They will also have a roster capable of making sure it doesn’t happen again. Losing Alicia Boren on four events hurts, but Florida still has plenty of one-, two- and three-event gymnasts like Rachel Gowey and Alyssa Baumann who can step in to replace a routine on any apparatus. Trinity Thomas was also a superstar in her freshman season, so she will only get better with time, and Jazmyn Foberg should be returning from injury to boost the Gators even more.

The reigning NCAA champions will have some big names to replace in 2020 with Brenna Dowell, Nicole Lehrmann and Alex Marks’ combined eight routines from the NCAA final leaving the program. But you can never underestimate the Sooners, who held the No. 1 ranking a majority of the season with Maggie Nichols being limited to two events. With a healthy Nichols, a roster that includes plenty of four-event gymnasts, Bre Showers back in action and a four-member freshman class, Oklahoma will certainly remain a factor to repeat as national champion.

The Wolverines’ talented freshman class from last season will only get better with experience, and the group now having a season under its belt now will be key for Michigan next year. That class’ consistency will improve and help negate the graduation of Emma McLean and Olivia Karas’ all around performance at NCAA’s—the only four championship routines Michigan is losing for 2020. U.S. elite Alyona Shchennikova has verbally committed to Michigan and would join next season if she chooses not to defer; she could be an easy replacement for several of Karas’ lineup spots. Sierra Brooks, after winning her group at J.O nationals last weekend with the highest all around score of any session, will be graduating high school early to join the Wolverines next season.

With only four routines lost from last season’s NCAA championships, the return of Emily Schild from injury and the addition of Canadian national team member Haley de Jong, Georgia’s prospects are looking up for 2020. Sabrina Vega and the Rachels (Rachel Dickson, Rachael Lukacs and Rachel Baumann) will be key for the GymDogs, with Dickson and Vega as senior leaders and Baumann and Lukacs set to improve with a season of NCAA experience now behind them. If Georgia can figure out how to get Marissa Oakley more consistently in the 9.900-plus range she’s capable of, the GymDogs will be very dangerous in 2020.

If LSU once again wants to challenge for a national title, it has a lot of work to do to replace big scores in its lineups. The Tigers are not only losing nine routines from their NCAA runner-up campaign, but those routines are from stars Sarah Finnegan, McKenna Kelley and Lexie Priessman, who all challenged for 10s on their events. Thankfully, LSU is bringing in four freshmen next year, including level 10 stars Kai Rivers and Kiya Johnson, who should immediately factor into the Tigers’ 2020 lineups.

Making the first “Four on the Floor” was a huge accomplishment for a program like Denver, but to accomplish that feat again the Pioneers will need some help from its incoming freshman class. Denver is only losing five routines, but many of the current team members aren’t all arounders, so the pressure will be on the newcomers to show up. Relying on freshmen can be a bit nerve-wracking, but thankfully Maddie Karr and Lynnzee Brown will be returning to do a bulk of the work. The Pioneers have now tasted success but have a bit of work to do to return to the NCAA finals for a second consecutive season.

Utah might have the most work to do of the major players to contend for a national title next year. The Red Rocks were already losing MaKenna Merrell-Giles and Kari Lee to graduation, but now they’ll also have to do without MyKayla Skinner as she tries for the 2020 Olympic team. In total, Utah has 14 routines to replace from last year’s championships, which is more than half the lineup. Former U.S. elites Maile O’Keefe and Abby Paulson will be joining the Utes next season, which will significantly help reduce the effect of their losses, but there are still quite a few holes to fill next season for Utah.

On the opposite end of the spectrum from Utah, Minnesota only has to replace one postseason routine from 2019. The Golden Gophers made huge strides by breaking the top 10 in the rankings several times, and this season they could easily be a top 10 mainstay. NCAA all around runner-up Lexy Ramler will be back for her junior season and will lead a talented supporting cast that includes Paige Williams and bars and beam perfect 10-threat Ivy Lu. Minnesota has all the pieces in place for a breakout season.

The Beavers pulled off arguably the biggest upset of the 2019 season when they upset Florida and qualified as a team to NCAAs. From that team, Oregon State is losing three-eventers Mary Jacobsen and McKenna Singley, as well as bars specialist Mariana Colussi-Pelaez for a combined seven routines. Luckily, the incoming freshman class features three strong J.O. gymnasts, as well as potentially—depending on her Olympic plans—world medalist Jade Carey, who could immediately make the Beavers’ lineups on any event.

With six routines to replace from the 2019 postseason and five incoming freshmen, including J.O. standout Makarri Doggette, Alabama shouldn’t have too difficult of a time coming up with replacement routines. Maddie Desch and Wynter Childers are both capable of putting up lineup-worthy routines on more events than they did last season, and if Gymternet favorite Bailie Key can break into any lineups, the Crimson Tide could be a challenger once again.

Unfortunately, Toni-Ann Williams’ injury meant the Golden Bears lost their star earlier than expected, but if there’s any upside to the season-ending injury, it’s that there’s now only seven postseason routines for California to replace. Kyana George and Milan Clausi will be the stars for California next season but will need some other gymnasts to step up if it wants to challenge for a spot at NCAAs. The routines the Golden Bears have are great, but filling those empty lineup spots may be a challenge.

The biggest gain for the Razorbacks next season may not be any of the incoming freshmen but rather new head coach Jordyn Wieber. She brings in a wealth of knowledge from volunteer coaching at UCLA the past few seasons, and she took the Bruins’ floor routines to the next level in a short period of time. If she can replicate even a little bit of her success with the Bruins in her first season at Arkansas, the Razorbacks will have no trouble replacing the four routines lost from their 2019 postseason lineups.

The Wildcats have a lot of routines to replace in 2020. Kentucky is graduating Sidney Dukes, Alex Hyland and Katie Stuart, three all arounders who had been doing a bulk of the work for most of their four years in Lexington. The incoming freshman class is seven members strong, which gives Kentucky a lot of potential routines to choose from. One of those freshmen is Kaitlin DeGuzman, who is set to join the Wildcats after decommitting from Oklahoma; she brings elite experience after competing internationally for the Philippines.

Losing four routines from Sienna Crouse is a hit for the Huskers, but with only five total routines to replace, Nebraska shouldn’t have too much trouble at least maintaining its ranking from last season. All around standout Taylor Houchin will be back, and finding routines won’t be too hard with plenty of options among the two incoming freshmen and the large and improving sophomore class.

The Cougars made some good strides in 2019, but 2020 could be their year to make waves. BYU is only losing four routines and returns major players Abby Boden and Abbey Miner as well as viral star Shannon Evans, who will surely be looking to finish off her gymnastics career strong. Not to mention there will be 27 gymnasts on the roster, so there will be no shortage of routines for the Cougars next season.

The Tigers are unfortunately losing a big senior class that contributed, on average, nine routines pre-Samantha Cerio injury. Taylor Krippner and Abby Milliet will be dearly missed next year, but Auburn is bringing in a seven-member freshman class that has the potential to break into those open lineup spots right away. Highlighting the incoming freshmen is Aria Brusch, who won her session’s bars title at last weekend’s J.O. Nationals.

The 2020 season could be the first step in Stanford’s climb back up to national prominence. The Cardinal is bringing in J.O. Nationals all around champion Chloe Widner next year, a freshman who could immediately replace the three postseason routines Stanford is losing from 2019. Canadian Jade Chrobok will also be a Cardinal next year who could easily help replace some of those 9.700 leadoff routines from last season if not perform even better.

Sarah Means’ and Shani Remme’s graduation means that Boise State will now be without two all arounders who have done a bulk of the work for the Broncos the past several seasons. After Remme’s career-ending injury in the middle of the 2019 season, Boise State did well to find quality replacements for her four routines, and it will need to do the same to succeed without Means in 2020. Former junior elite Adriana Popp will be joining to help alleviate some of that pressure, and Courtney McGregor will now have the spotlight as the team’s premier all arounder.

As of now, it looks like Washington will remain right around the No. 20 spot next year as it did in 2019. The Huskies are losing seven postseason routines, and with a projected roster next year of only 12 gymnasts, replacing those routines may be a challenge. Madison Copiak will be back to take over the role of star on the team, but she’s going to need to find a good supporting cast. Washington also has one scholarship still available for next season, so this summer we may see the Huskies add another gymnast to their roster to gain some depth for 2020.