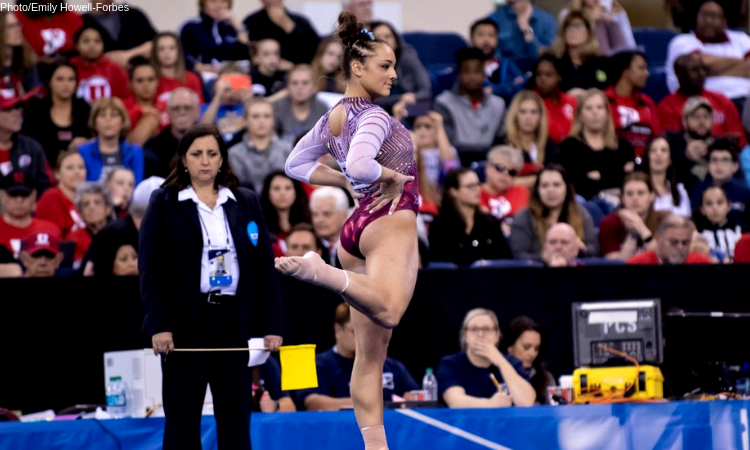 The first national semifinals under NCAA gymnastics’ new postseason format lived up to the format’s promise of increased competitiveness: Both came down to the very final moments to determine who would advance to the team finals.

LSU head coach D-D Breaux, a longtime advocate for a postseason involving four teams per session instead of six, was thrilled with the results.

“What a great meet; what a fabulous format,” she said. “We’ve worked really hard to get to this point with women’s gymnastics, and it’s an amazing competition. I just think the best of the best were out here.”

A Competition of Almosts

UCLA qualified in first place out of the afternoon semifinal with a 197.675. It was the farthest thing from an easy win, though. After each of the first three rotations, the top three were separated by a tenth. The eventual third place finisher, Michigan, had the fourth-highest score of the weekend.

“This format does eliminate great teams before they get to the national championship,” Breaux said. “But I’m telling you what, I knew this session would be a hard-fought battle. It came down to the last two performers on the last event, and I just can’t say enough good things about the quality of competition.”

Michigan, which was ranked second at the midpoint, stepped off the pace in its vault rotation. A lower score there allowed UCLA to move into first with an expectedly-fantastic floor lineup while Sarah Finnegan’s 9.950 on bars punctuated a strong final rotations for the Tigers—and won her a national title on the event.

“I’m honored to be a part of this new format and to make history, and say ‘Hey, we’re one of the teams that made the first final…what are we calling it?,” Finnegan said, laughing. “It’s cool to be one of the top, top teams.”

Finnegan wasn’t the only session one athlete whose score held through the whole meet. Michigan freshman Natalie Wojcik was unmatched on beam while UCLA’s Kyla Ross picked up her fourth and fifth NCAA titles on vault and floor respectively. LSU’s Kennedi Edney joined Ross in a large tie for the vault title. Ross walked away with second place in the all around, while Finnegan and Edney finished fourth and fifth, respectively.

A Changing of the Guard

No. 1 Oklahoma was never projected as an upset risk in this semifinal, and it was clear from the first few routines that the Sooners would cruise through to the finals. Their 197.850 locked them into the first seed for Saturday’s competition despite a shakier beam rotation than most might expect from the squad.

“The meet goes so fast, the pace is so fast and momentum is so important in a meet like this,” she said. “Especially without the byes, momentum can really carry you through.”

Maggie Nichols’ return to the all around was key for the Sooners. The junior has been limited all season by foot pain, but after a teammate suffered an injury at regionals, she elected to add floor back to her repertoire for the first time since January 11 and was able to defend her national all around title with a 39.7125 after only her second competition on all four this season. Kindler indicated that it’s her intent for Nichols to compete all around in today’s final too.

Outside of Oklahoma’s imperious meet, team qualification from the evening session was also deeply competitive.

No. 8 Oregon State qualified to nationals on the strength of a spectacular upset over Florida two weeks ago in Corvallis, and the Beavers showed every intention of repeating the feat today against No. 4 Denver. After three rotations, the two were tied.

Ultimately, a great bars rotation for the Pioneers secured their first-ever qualification to a national final with a 197.0375. But the feisty Beavers will still finish the season ranked at No. 6.

Denver sophomore Lynnzee Brown said that the Pioneers felt the pressure of the tight meet but that their coaches reminded them “this isn’t about the scores, it’s about making memories for [their] seniors.”

Brown’s 9.950 on floor secured her the NCAA floor title in a tie that also included Ross and seniors Alicia Boren (Florida) and Brenna Dowell (Oklahoma). On vault, Auburn’s Derrian Gobourne earned a share of the title, making her the only individual event specialist to stand atop the podium at the championships. All around champion Nichols also joined the tie on vault as well.

In one of the day’s most thrilling storylines, Minnesota sophomore Lexy Ramler capped her spectacular 2019 season with a 39.6625 in the all around that was good for second place. Ramler has scored no lower than 9.750 on any event this year, and her season low in the all around is a 39.350.

Oklahoma, UCLA, LSU and Denver will compete in the final Saturday night at 7:00 p.m ET in Fort Worth, Texas. The competition will be broadcast on ESPNU.