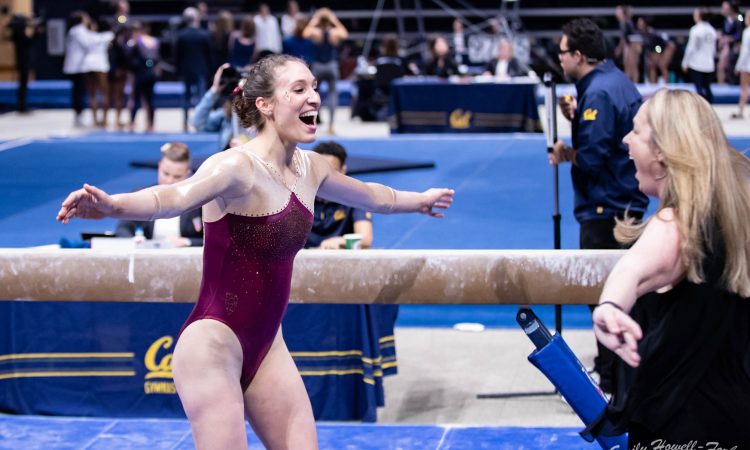 We’re getting into the play-in teams now, which means this is our first chance to see whether fatigue might be a factor in the new format. LSU should be secure here, but No. 14 Auburn’s great season didn’t erase its inconsistency. Arizona State has put up some great mid-196 scores in the last weeks and is more than capable of keeping this meet close.

Bowling Green’s Jovannah East will compete in the all around, rotating with Arizona State. Stefanie Schweikert will vault, Kathryn Doran and Jessica Ling have made it on bars, Hannah Cohen will compete beam and Gabriella Douglas has qualified on floor.

LSU will start on vault today, with George Washington on bars, Auburn on beam and Arizona State on floor.

Hoo boy I keep forgetting that these things start RIGHT on time.

HARROLD – LSU: One and a half, the commentator thinks it was stuck, not sure I agree.

Udowitch of ASU had an OOB on the first pass.

CALLIS – ASU: Double pike, little bit of a scoot on the front foot, two and a half twist gorgeous.

RIDDLE – AUB: BHS LOSO. Missed some stuff in the middle, cat leap switch side back full. 9.8

EDWARDS – LSU: Soft knees in the air, landed off  and had two big steps to one side.

BELKOFF – ASU: Double pike, slide back. One and a half front lay to close.

EDNEY – LSU: One and a half, lands a little lock-legged with a step back.

GINN – ASU: Front thru double back, stumble a little into lunge. Double pike. 9.775

K. SZAFRANSKI – ASU: Double pike, tour jete half Popa. Double back, little shift into the lunge, one and a half front lay great. 9.8

Back in the PMAC after starting her career here! That might be her last floor routine. If so, it’s a great full circle moment.

LEONARD-BAKER – ASU: Double back, one and a half front full SO clean. Tour jete half split full, double pike. 9.85

EAST – BGSU: Two and a half twist punch front. Double twist as a side pass, WHAT. I swear I’ve watched her before but I don’t remember that. I think Rudi to close. Fabulous. 9.825 🙁

Oooookaaaaay my attention span was not ready for that. I’ll try to be less checked out for the rest of this haha.

DURANTE – LSU: Blind to Jaeger, SHE BROKE HER PINKY A FEW DAYS AGO AND IS DOING BARS ANYWAY, FTDB stuck jk two steps. 9.85

FERRER – LSU: Jaeger, messy legs on the catch, question on the handstands. DLO nice and stuck. 9.85

HARROLD – LSU: Zuchold, the usual, blind to Jaeger. Hop change to double front with a step.

SHEPPARD – AUB: Triple twist really nice, missed the middle, one and a half front lay is good. 9.3875

LEONARD-BAKER – ASU: FTY, lands a bit staggered but just about holds the stick. 9.825

ZONA – GW: Full turn, side aerial low and awkward but holds on. One and a half dismount great. 9.675

EDNEY – LSU: Hindorff, usual feet but good, double lay, pings off a little, step to one side. 9.9

WATSON – AUB: Double arabian, big step forward. Hangs in the air on her double back and almost overrotates in it.  One and a half front lay I think. 9.8

BANEN – GW: Kochetkova way off, struggles to get her feet down. Cat leap switch side, BHS LOSO a little off. Cartwheel gainer full with a hop back. 9.675

GOBOURNE – AUB: Double back, steps to one side to avoid an OOB on her huge open double back. Foot landed on the line but not over, I don’t think. Front full front lay.

DORAN – UB: Really excited to see one of the best routines in Division II here. Blind to Jaeger, huge and pretty, great bail. Tentative handstands, full turn double back cowboyed but STUCK. Good for her!

MILLIET – AUB: Front lay to Rudi, switch ring switch half. Double pike. One and a half front lay, really clean landings. Auburn staying right in it with LSU.

CERIO – AUB: Well that sucked. She went down on her first pass and looks extremely injured. Wheeled off.

Fall for Ella Douglas on her second pass. She was standing around a LONG time.

Oof. Can’t think about much besides Cerio right now.

GLENN – AUB: One and a half twist, one knee looks like it buckled a little and took a side step but she’s okay. 9.775

KARPOVA – GW: One of my absolute faves since JO days. Ring jump 1/1, double pike, comes in a little overrotated but hangs on. Front lay front full. Really quality dancer. Whip one and a half. 9.65

FINNEGAN – LSU: Wolf turn, BHS LOSO nice and easy, switch switch half. Side somi, side aerial back full with a hop. 9.925

ZOIS – GW: Double pike, huge and skitters back a bit. Two and a half, lands on one leg anticipating the landing, front full front half.

RAYMOND – GW: Double pike, step forward. Switch half split full, double back way short and lands on her toes. One and a half front lay.

HARROLD – LSU: Front double full, crazy legs and a big step, double pike coming back. One and a half twist.

WATSON – AUB: Tkachev, toe on to bail is great. FTDB, pings off a little with a scoot to one side.

GUTIERREZ – ASU: BHS LOSO good… bend check, hangs on. Rulfova great, FHS, one and a half dismount with a hop.

CAMPBELL – LSU: Double back, hangs onto the stick, missed the middle, one and a half front lay. Good.

GOBOURNE – AUB: Tkachev to Pak, bit of leg sep and feet, FTDB with a bit of leg split and a hop back.

Olivia Zona of GW balked on her vault. Trying again.

EDNEY – LSU: Double arabian, lands awkwardly, oh don’t scare me like that. Just has to take an extra step. One and a half front lay. Double back, looked like a scoot back to me.

DAY – AUB: Toe on toe half to Jaeger, HUGE, didn’t think she’d be able to catch it. Double arabian with a step.

Looks like Finnegan is scratching in the 6 on floor.

CALLIS – ASU: This could be the last of her career. BHS BHS LOSO, gorgeous, full turn. Split to double stag, FHS to knees, side aerial back full with a shuffle

I believe ASU’s Cairo Leonard Baker becomes the first individual to guarantee qualification to nationals with her 9.925 on bars!