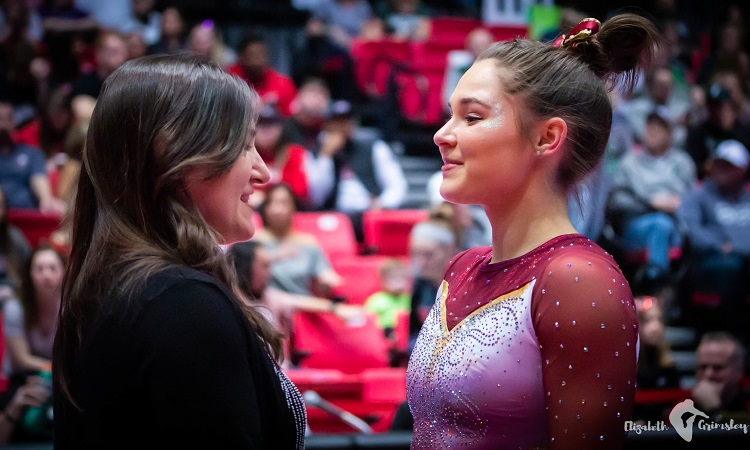 Well this one is a stinker, isn’t it!? The NCAA: “Let’s put the two highest round one teams together to fight for the death, especially since they would probably both advance to round two if they were separated in any other round one competition. [Evil laugh.]”

I’m sure the meeting went just like that. We’re not going to talk about the other evil laughing that undoubtedly went down while planning this regional. I know. We know. It’s Not Good. But here we are.

I could pretend to try to guess which of these teams will advance, but I won’t. It’s a who will hit today sort of battle. Illinois is on an upswing, but Central Michigan has been more consistent all year. The key for Illinois will be surviving vault in rotation one, then being normal on the other three. If the Chippewas put up their coasting, regular score, they’ll be in good shape. There’s really not more to it than that: This is very evenly matched.

Remember, whichever team advances will compete as the fourth seed in session two tomorrow against UCLA, Nebraska and West Virginia. Whichever team doesn’t advance will send its individual qualifiers into Friday’s competitions. See below for a refresher on those individuals.

Alright. Ready? Let’s do it.

Only an hour out until the bright lights and #B1G stage!

Unclear whether there will actually be an overall stream for this thing. I see one for each event right now. Good cool yes yep.

Touch is happening! This thing might start on time.

If we really don’t have an all around feed, and I’ll have to hop between events, this will become…interesting. I’m on a work laptop (hi, sorry job!) and only have one screen today, so. We’ll see how this goes!

AHA! The main feed has popped up. Thank the heavens.

This sound quality is…hmm. Sam Peszek is explaining the new format for us.

OH HEY BOTH EVENTS ARE GOING AT ONCE. EVEN THOUGH THIS IS A DUAL. What the heck. We missed Dwyer’s FTY, which Sam says was a hit.

Howell (Ill): FTY some pike but a near stick.

Roe (Ill): FTY, tucked, big, and a big hop back. SHE HAS A PARTIALLY TORN ACHILLES WHAT.

Phew scores are tight. Illinois survived vault, which was the goal. Both teams need to think about landing errors. We saw way too many steps from two teams in a knockout round. As promised, it is going to be a close one.

Taking this moment to harp on sound quality. Peszek sounds like she’s underwater. Come. ON. This is postseason. Fury is building.

Fettinger (CMU): FTY, some pike and a big hop back.

Again, both teams are suffering from a case of the hops. Some cleanliness on bars has helped Illinois pull just ahead; the Illini hit more handstands than the Chippewas did in rotation one, and that is the difference.

Beam feed is back hooray.

Scott (Ill): She adjusted something on the beam, so let’s hope we don’t have an equipment problem! That would just take the cake. We missed Otto’s beam in that snafu. Front tos bhs, stellar. Switch + split. Front aerial, good. Cartwheel gainer 1/1, good.

Zoeller (CMU): Double tuck bounced up a bit into the lunge. aaaand the feed cut away to beam. That’s not super cool. She’s back. Rudi + straddle to end, good.

Oh super there’s a problem with the beam!

Howell (Ill): Pretty flow in and out of her full turn. Bhs lay two feet, slightly off but she covers it well. Switch + straddle 1/4, good splits. Great extension in her dance. Cat + switch side. Gainer pike small hop.

Pedrick (CMU): Sam telling us her 3/1 was shy, but we didn’t see it. combo pass was solid. Double pike, low chest hops forward. Just not quite there energy-wise.

Phew scoring has NOT loosened up. Illinois used a very steady beam rotation to pull ahead of the Chippewas, who suffered from some low landings on floor. Still, though, this will come down to the final routines.

Are you anxious? I’m anxious. Touch feels like an eternity. An elimination round was a great idea, NCAA, but doing it on a Thursday afternoon was BAD. BAD. SHAME.

@TheBBSituation re: Illinois checking beam. some hardware came off during Scott's routine and left it shaky. They had to pause b/n routines to fix it

Porter (CMU): Getting a big pep talk from coach MacDonald. She’s dancing while she waits for the score. She waited through all of Otto’s floor and is still waiting after it. Big test here as she finally mounts. Split + tuck 3/4. Bhs loso solid. Switch + straddle 1/4, very nice. This is impressive. Side aerial 1/1, stuck. Very nice.

Otto (Ill): Bit of a wait here too. Going at the same time is saving literally no time because of these simultaneous waits. Alright here we go. Whip half barani, she looked a little off balance? Maybe didn’t get a rotation she intended to. We’ll see if it lowers her SV. 3/2 + front tuck good.  Switch ring + Khorkina, good, that’s such a fun combo. FHS rudi to close, good. I think she should be alright SV, but we will see.

Dwyer (Ill): We cut in as she had a very bouncy landing. Switch ring low front leg wolf 1/1 to end.

Pedrick (CMU): back dive mount. Bhs loso some knees in the bhs but solid. Cat + switch 1/2, not quite there on the split. Front aerial. She has a very quick and confident pace. RO 2/1, stuck!

The scores are down! Who else is nauseous?

Memmel hit in the anchor for CMU, we just saw her landing.

THE SCORES REALLY NEED TO GET IT TOGETHER. WHO WON?!

Scores are in! Illinois will advance to day two!

Well. As expected, that came down to the very last landing. That was INTENSE. I’ll be back with you for both sessions tomorrow, as well as the big show on Saturday. Everyone go eat a cookie or something to recover; we’re nowhere near done.