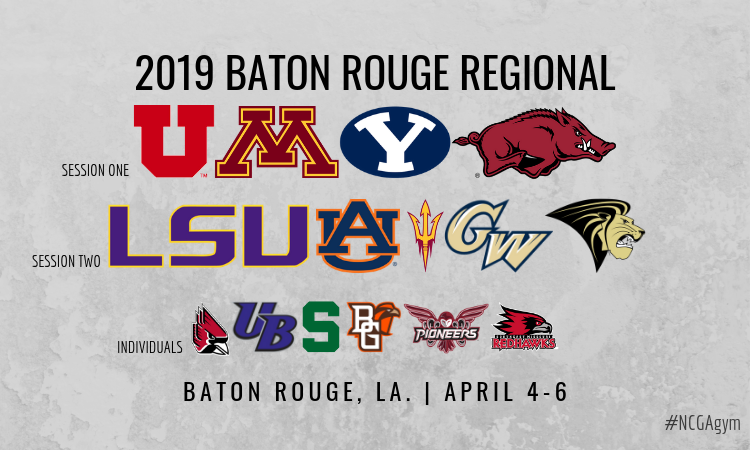 First up is the Baton Rouge regional. Thursday will feature No. 35 George Washington and No. 36 Lindenwood in round one. Friday we jump into round two action with No. 6 Utah, No. 11 Minnesota, No. 17 BYU and No. 20 Arkansas competing in the afternoon session and No. 3 LSU, No. 14 Auburn, No. 21 Arizona State and the winner of round one in the evening session. Two teams from each of these Friday competitions will advance to round three on Saturday where the top two from that meet make it to nationals.

Finally, don’t forget to enter your postseason predictions in the 2019 bracket challenge! The deadline for submissions is Wednesday, April 3 at 7 p.m. ET. Once you enter, you can follow your progress here.

This should be a close meet. Both of these teams squeaked into regionals at No. 35 and No. 36 with just 0.050 separating them in NQS. It’s Lindenwood’s first ever regionals berth since becoming a program in 2013 and the first Division II program to make regionals since Bridgeport that same year. Lindenwood’s 195.350 at the MIC championship was done mostly without key contributor Courtney Mitchell who was injured during the first rotation. Her status for regionals is unclear. The Colonials have a slightly higher peak and average; however, the Lions have shown more consistency throughout the season.

Theoretically, these two teams are pretty evenly matched, with a slight advantage going to George Washington. A meet near its peak should do it for the Colonials, but don’t expect it to be easy. Lindenwood will certainly put the pressure on and has a good chance to take the meet as well. If how the two teams’ seasons have gone so far is any indication, we’re in store for an exciting meet. One thing to keep an eye on, though, is Mitchell. She’s one of the team’s stars, so her going down could hurt the Lions’ chances.

George Washington’s Alex Zois is a must-watch on beam and floor. Her teammate Hannah Cohen is also a delight to watch on beam; she’s an individual qualifier for George Washington if the Colonials don’t advance. Courtney Mitchell, if she’s healthy enough to compete, is particularly captivating on beam and is an individual qualifier on the event for Lindenwood should the Lions not make it out of the play-in meet. Lindenwood’s Andavea Alexander is also a pleasure to watch on beam and floor, with a peak scores of 9.875. Also watch for Ryan Henry on floor; she’s scored a 9.875 on the event this season.

Utah has had a relatively consistent season, never really falling too hard and typically scoring in the low to mid-197 range. Its four highest scores have come in its last four meets, including its high of 198.025 at the loosely-scored Pac-12 championship. That consistency should play to the Utes’ advantage and a replicated performance to what the team has done all season should advance the Utes to the next round. Minnesota enters as the No. 3 seed (No. 11 overall) in this meet and like Utah has been a pretty consistent team this season. Aside from its first three meets, the Golden Gophers hadn’t dropped below a 196.500 until they scored a 196.425 at the Big Ten championship.

Both BYU and Arkansas have had up-and-down seasons. For the Cougars, this has resulted in a team score anywhere in the mid-to-high 194s to its peak of 197.000. Beam will be a key for the Cougars; its connections are often iffy, and if they don’t solidly connect the elements, they could be at risk for having routines devalued, resulting in lower scores. Also watch for the Cougars on floor—they stumbled a bit at the MRGC championship but typically excel on the event. Arkansas appears to have found its footing in recent meets but has been inconsistent for most of the season, dropping as low as a 193.875 but also topping out at 197.000. Most of its recent meets have scored in the 196s as the team finds its footing and integrates more of its freshmen class into the lineups. The Razorbacks have been a team that was plagued by injuries, but they have gotten stronger throughout the season. They did, however, take another blow recently with Katarina Derrick posting on her Twitter that she suffered her second ACL tear in the last year and will be out for the rest of the season.

Utah should have no problems advancing barring a disaster meet. The interesting thing could be who takes the second spot. Minnesota’s the other likely qualifier, but that’s not a sure thing depending on how the other two teams do. Consistency will be an advantage for Minnesota while the other two teams’ consistency leaves much to be desired at times this season. BYU and Arkansas will likely have to put up one of their best meets of the season to advance, but it’s a definite possibility, especially if Minnesota doesn’t hit it out of the park or has an imperfect meet. Of those two, Arkansas seems to be the more likely to upset Minnesota for the second spot in the regional final.

There are some obvious routines you shouldn’t miss in this session, such as MyKayla Skinner and Lexy Ramler on all four, plus Shannon Evans’ floor routine and Ivy Lu’s bars. Some other under-the-radar routines include Tiarre Sales on beam and Sophia Carter on floor.

Because this session is so competitive team-wise, it will be very difficult for these individuals to qualify to nationals. However, keep an eye on Julianna Roland of Bridgeport, who has scored as high as a 9.900 on vault, and Anna Kaziska, the freshman all-around star for SEMO, who is competing on floor this weekend and has also scored a 9.900 a few times. Also watch for Michigan State’s Lea Mitchell who qualified as an all arounder. Qualifying to nationals as an all arounder could be tough given other gymnasts’ peaks, but Mitchell has a shot on floor where she has topped 9.900 three times this season.

LSU is the top-ranked team in this regional and will have its home crowd to its advantage. The Tigers have exceeded what many thought the team would do this season, even overtaking Florida for No. 3 in the nation late in the season. LSU had a rocky start to the season but hasn’t scored below 197 since its meet on February 8th. Auburn came on strong to start the season but has faded a bit since then. At one point in the season, Auburn was a real possibility for the SEC regular season title. Since its disaster of a meet at Texas Woman’s on February 24th, Auburn hasn’t dropped below 196 but also hasn’t hit 197 since February 15th, its only 197 of the season.

Arizona State started slow but has found its footing in recent meets. Its recent low point was on March 10th at Denver, but the Sun Devils responded with one of their highest scores of the season the following meet and have performed well since. Most recently, the Sun Devils upset Washington to win session one of the Pac-12 championship. An interesting note is that most of the Sun Devils’ high scores have come at home, apart from their score at the conference meet.

If LSU doesn’t advance out of this session, it means that something went very wrong. In all likelihood, LSU should advance with no problems. The second spot could get more interesting though. Auburn is the higher seeded team, but it’s very possible that Auburn and Arizona State really battle it out for the final spot in the regional final. Both have performed at similar levels lately, and their scores at their respective conference championships are just 0.025 different. It’s anyone’s game and could come down to the narrowest of margins—a missed handstand, a landing hop, a step—the littlest things could determine who advances out of this meet.

Again, there are a few routines that are fairly standard can’t-miss sets, like Sarah Finnegan’s bars and beam, Drew Watson’s vault and Cairo Leonard-Baker’s bars. However, there’s also Justine Callis, who has a solid chance of qualifying to nationals as an individual after notably claiming the beam title in the team’s meet against UCLA earlier this year.

The two qualifiers from Michigan State in this session, Jessica Ling and Ella Douglas, are individuals to watch. Both have scored at least a 9.900 on their respective events—the only other individual who can say the same is Kathryn Doran from Bridgeport who scored a 9.925 on bars earlier this season. Depending on the outcome of round one of competition, Alex Zois is not to be counted out in the all around. She has scored as high as 39.425, and the Colonials have had representation at nationals each of the last four years.

How to Watch: SECN+

If the meet goes as expected, we should see Utah, Minnesota, Auburn and LSU in the final round. The second spot at each of the round one meets has upset potential though, and we could see one of the other teams make the regional final. The two teams that are virtually a lock to advance out of this regional are LSU and Utah. Meets will have to go very bad for both teams if there’s any chance at either not advancing. Minnesota will likely be on the heels of those two, ready to capitalize on any mistakes in its quest to make nationals for the first time since 2016. If the Gophers don’t advance, it’s likely that sophomore Lexy Ramler will qualify as an individual. Arkansas was expected to have an excellent chance to build on and improve last season’s national qualifying performance; however, it hasn’t necessarily had that kind of season and will need to hit it out of the park and capitalize on others’ mistakes if it wants a shot. For the Sun Devils, the team’s rise under the Santoses can’t be missed; if they qualify to the regional final, it will be another big accomplishment for a team with a storied past of success trying to restore the legacy that once was.