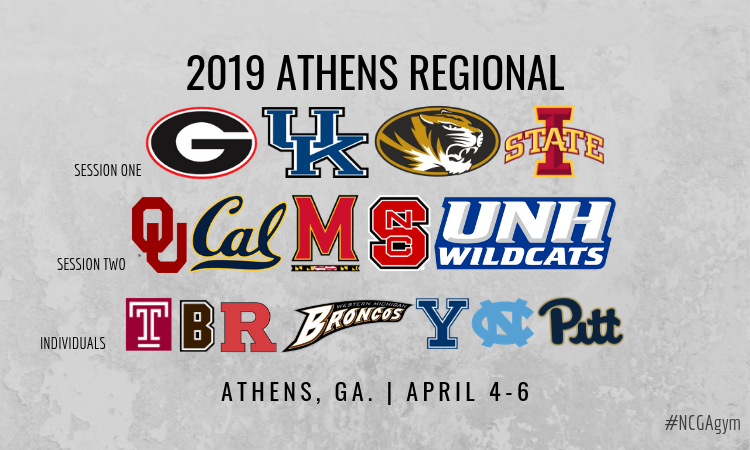 First up is the Athens regional. Thursday will feature No. 31 N.C. State and No. 34 New Hampshire in round one. Friday we jump into round two action with No. 8 Georgia, No. 9 Kentucky, No. 19 Missouri and No. 22 Iowa State competing in the afternoon session and No. 1 Oklahoma, No. 15 California, No. 28 Maryland and the winner of round one in the evening session. Two teams from each of these Friday competitions will advance to round three on Saturday where the top two from that meet make it to nationals.

Finally, don’t forget to enter your postseason predictions in the 2019 bracket challenge! The deadline for submissions is Wednesday, April 3 at 7 p.m. ET. Once you enter, you can follow your progress here.

These teams have been No. 1 and No. 2 in the EAGL for the majority of the season. New Hampshire started off slow but steadily climbed in the rankings as the season progressed. The Wildcats are coming off their third EAGL championship win in program history and are led by a strong senior class, including all arounder Danielle Mulligan. N.C. State has held the No. 1 spot in the EAGL for the majority of the season, but was not able to defend its conference title, falling to New Hampshire last week. This meet will be a rematch for the two teams and the third time they’ve met this season.

Looking strictly at the rankings, N.C. State appears to have the edge, but things aren’t that simple. The teams have faced each other twice this season, with New Hampshire coming out on top both times. New Hampshire will be hoping to use its stronger vault and beam lineups to capitalize on any mistakes that N.C. State might have. It would not be surprising to see this one come down to a tenth or two—or even less.

New Hampshire senior all arounder Danielle Mulligan has lovely work on bars, where she holds the school record of 9.950, and has a unique routine on floor, featuring a triple turn connected to a double turn. Teammate Lauren Diggan has a unique hop full to Gienger combination on bars. N.C. State junior Drew Grantham has a big, stickable Yurchenko full that she’s scored 9.900 on four times this season, as well as some big tumbling on floor. Senior Alexa Phillips brings the difficulty on floor with a double Arabian, and Nicole Webb, who transferred from Florida after the fall semester in 2018, is lovely to watch on beam and floor.

Georgia and Kentucky have a chance here to prove that any tough meets from the season were flukes compared to the levels of greatness they also achieved. Because while they’ve both achieved program-defining (or for Georgia, program-redeeming) scores in 2019, they’ve also had some rough showings (particularly Kentucky, just last week at SECs) that are keeping them in the question mark category. Missouri and Iowa State didn’t see quite their levels of success this season, with both struggling with injuries. But the fact that both are top-25 ranked teams should still show you the quality of gymnastics they can bring, particularly Iowa State on vault and Missouri on floor.

Georgia and Kentucky will expect to advance, but it’s worth noting that each has scored lower than Missouri’s and Iowa State’s NQS by at least a point in 2019. Kentucky’s performance at SECs shouldn’t be disqualifying per se, but a day like that Friday might not be enough to send it to round three. Missouri has arguably the best chance to upset out of any of the unseeded teams; it hasn’t hit 197, but the flashes of brilliance the team has shown could easily put it on the level of Georgia and Kentucky on the right day.

Georgia’s home crowd should be a big advantage for the Gymdogs, which should carry over into their floor rotation and make it even more exciting than usual. Expect especially fun routines from Sabrina Vega and Sydney Snead, the latter of whom will be performing in Stegeman Coliseum for the last time. In terms of high scoring potential, Kentucky’s Katie Stuart went 9.975 on vault a few weeks ago; she, along with Mollie Korth and Sidney Dukes make Kentucky’s vault lineup one you won’t want to miss. Plus, we would be fools to end this section without talking about Alex Hyland’s Fresh Prince floor routine. Missouri also has an impressive vault lineup, but look for fun and exciting floor routines from Gabrielle Gottula and Morgan Porter. Iowa State senior Meaghan Sievers has solid routines on all four events, having established herself as one of the top all arounders in program history and has qualified to nationals on vault in two of her three attempts.

Khazia Hislop has qualified on three events, but floor is where she really shines and has the best chance to move forward. She and Belle Huang of Rutgers are individuals you won’t want to miss on the event as they look to make a nationals run as well. Temple’s Monica Servidio has scored 9.900 on beam several times, and her big triple series could be enough to send her forward if done well.

Oklahoma has been the No. 1-ranked team all year and is the only team to have consistently and successfully fielded a full lineup of 10.0 start value vaults. However, the team does have some areas of vulnerability. For starters, reigning national all around champion Maggie Nichols has been limited to bars and beam for most of the season. Also, beam has not been as solid of an event this year as we have come to expect from the Sooners with the same going for their floor lineup as well. Cal has had an up-and-down season. It lost its senior leader Toni-Ann Williams to an Achilles injury halfway through the season and has had some consistency struggles on bars. However, the Golden Bears have also broken their beam and team total score records this year and have some exciting underclassmen who have stepped up in a big way in the wake of Williams’ injury. Maryland has been a team on the rise. It has some exciting underclassmen who have been huge contributors for the team this year. While beam has been a struggle at times, its bars and floor lineups will be ones to watch.

Barring disaster, Oklahoma and Cal should advance from this session fairly comfortably. However, the other contenders have reached 196 this year more than once, so if there is a disaster from one the top two teams, things could get interesting. Oklahoma’s season low is nearly a half point higher than Maryland’s season high, so it would take a complete meltdown to not advance. However, if Cal has another bars-tastrophe, things could get interesting if one of the unseeded teams is having a great day.

It goes without saying that you do not want to miss Maggie Nichols on bars and beam, where she’s ranked No. 2 and No. 1, respectively. In addition, freshman phenom Olivia Trautman has already notched a perfect 10 on floor. For Cal, the Pac-12 freshman of the year Milan Clausi has lovely routines on beam and floor in addition to a huge Yurchenko one and a half on vault while teammate Emi Watterson is ranked in the top 20 in the country on bars. Both should be contenders to advance to nationals if Cal doesn’t qualify a team. Maryland sophomore all arounder Audrey Barber has a huge full-in on floor and has beautiful routines on bars and beam and is another one to watch in the individual qualification race. Teammate Collea Burgess opens with a lovely triple full on floor that you won’t want to miss.

Danielle Mulligan is a contender to advance to nationals either on bars or in the all around. Jessica Wang has put up a 9.925 on bars this year and could certainly contend with a repeat performance, as could Mei Li Costa, who has scored 9.900 this year. With so many great floor workers at this meet, it will be a tough event to qualify on, but India Anderson has reached 9.900 a couple of times and shouldn’t be left out of the conversation.

How to Watch: SECN+

If it all goes to plan, Oklahoma, California, Georgia and Kentucky should battle it out for the two nationals spots Saturday night. Remember, all four went to nationals last year and only two can qualify this year. This regional, along with Ann Arbor, is going to be one of the cruelest in terms of who loses out under the new system. Either way, it will be two that are more than capable of contending on a big stage.