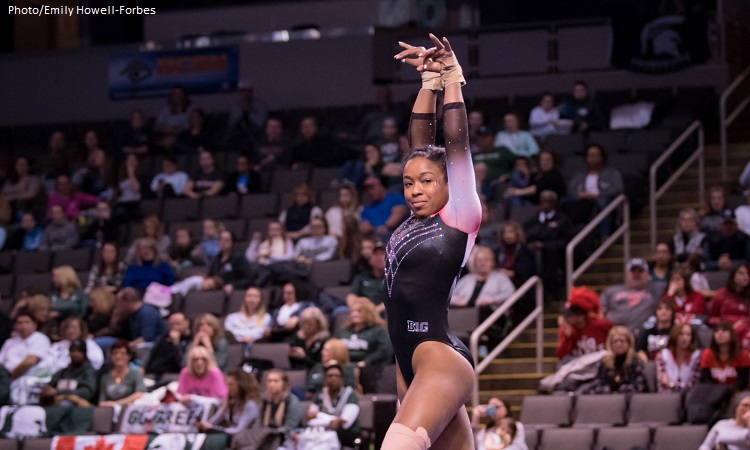 There’s a lot going on this weekend. Your attention, as a dedicated gymnerd, will be in about 200 places at once. You probably already have mental lists of your must-watch routines, especially in the SEC, Pac-12 and Big 12, but we wanted to make sure these four Big Ten routines didn’t get overlooked in all of the chaos this weekend. Yes, yes, your list is already long, but this is just one set on every event. Trust us, they’re worth it.

How many Ilgs exist in the NCAA? Not many, and this is the only one in the Big Ten. Rizkalla is a senior and has been closing out her career with a strong run on the event, including this personal-best 9.900 on March 2 at New Hampshire. When reached by email, Rizkalla said she only started training the vault during her sophomore season; she was looking for a 10.0 start value after the rule change. It took her some time to settle into competing it, but she’s on a roll, so keep an eye on her for sure in the Scarlet Knights’ lineup on Saturday.

Speaking of rare college skills, an Ezhova?! We’re pretty sure this is the only one being performed in college right now (please let us know if there is another out there in the wild!). What’s more, Gagliardi does it with such a strong body position and leg form. It is divine. We could watch this for days. The freshman has a career-best of 9.900 on bars; watch to see if she can match it for the Buckeyes this weekend.

You probably watched this routine a few times already, but it’s worth a reminder. When asked about her unique series, Borden said, “I don’t like to flip backward!” Her front aerial to front handspring isn’t the only special part of this routine though. Don’t miss her lovely toe point and ‘cast’ to handstand mount, not to mention the elite way she dances in and out of skills. Considering that she joined the team in February and was thrown right into competition, having no score below a 9.675—and a high mark of 9.875—is pretty impressive. Watch to see what one more week on the roster has done for her.

Senior Robinson had been missing from lineups since 2016 with a torn ACL that resulted in a long recovery. She broke back into the competitive lineup this year after having done a smattering of exhibition routines with a very creative two-pass routine. Her set features a double turn to immediate sissonne and a triple turn. “I was actually a dancer before I was a gymnast,” she said about the unique elements in her routine. Getting bonus from dance, and keeping her tumbling minimal, has kept her knee feeling good. You won’t want to take your eyes off of this set, trust us.