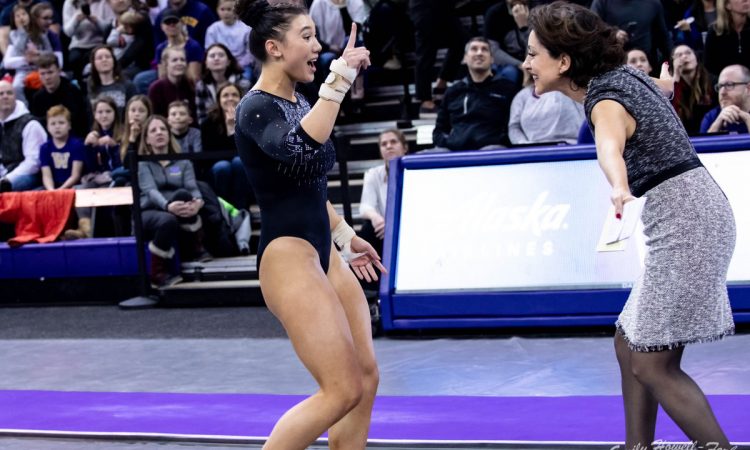 No. 2 UCLA Gymnastics was far from its best at its senior meet on Saturday, but the gymnastics won’t be what the sellout crowd in Pauley Pavilion remembers. Instead, the defining story of the meet was the Bruins’ quintessentially theatrical and touching farewells to their senior class and retiring head coach Valorie Kondos Field.

The competition itself had some highlights, though. After a mistake-ridden first half, the Bruins rebounded with a 49.825 on floor that ranks third in program history. The near-flawless lineup was led by an expected—but still deserved—10.0 by senior Katelyn Ohashi in her last routine in Pauley, as well as a landmark perfect score from Kyla Ross.

Ross’ 10 on floor completed her “Gym Slam,” the elusive status of having scored perfect 10s on every event. She’s one of 11 gymnasts to do so, and one of only seven to do it within a single season.

Even more remarkably, the historic accomplishment came at the end of her worst meet of the year. She had two falls in a single meet for only the second time in her college career—an uncharacteristic stumble that Kondos Field, in her remarks after the meet, explained was related to anxiety over the junior’s looming final exams.

Ross said that she was able to bounce back from the challenging start by leaning on her teammates.

“Katelyn told me that I’ve been carrying the team a lot this season and today they finally had a chance to help me,” she said. “It was amazing to know I had that support.”

The most special moments of the  meet came after the routines were finished and the scores were tallied. The competition was followed by almost forty five minutes of ceremonies and celebrations recognizing the seniors and Kondos Field.

The legendary coach was honored with a tribute video assembled by team videographer Deanna Hong and with a flash mob that included dozens of alumni, the current athletes, the visiting Utah State athletes and the rest of the UCLA coaching staff. The whole event was a complete surprise to Kondos Field, and following the meet her astonishment was tangible.

“UCLA Athletics did a great job keeping me out of the loop,” Kondos Field said. “I had no idea what was going on, I had no idea who was coming. Zero. Nothing. I don’t know if it’s been in the works for weeks, months, years. I don’t know how they got that video. Where’d they get all that? Did Deanna work all night long to put it together?”

She reminisced on the “blessing” of being able to spend her whole coaching career and adult life life at UCLA and said the greatest joy was building relationships with her athletes and watching them grow as individuals.

“It’s not the gymnastics part that’s fun—that’s the icing [on the cake,]” Kondos Field said. “It’s helping young women really find their inner light, their strength, their courage; to dream big and to not be set back.”

There will be a permanent tribute to Kondos Field in Pauley Pavilion too. The floor has been named the Valorie Kondos Field Floor and the carpet will bear her name permanently.

She was visibly emotional when reminded that her namesake would reside permanently on the court named after John Wooden, who she regularly cites as her inspiration and greatest coaching influence.

“The importance of this building is excellence that it has instilled in all the people who came in here,” she said. “This is Coach Wooden’s home that we all get to come visit. For the first time, I feel like it’s my home too.”