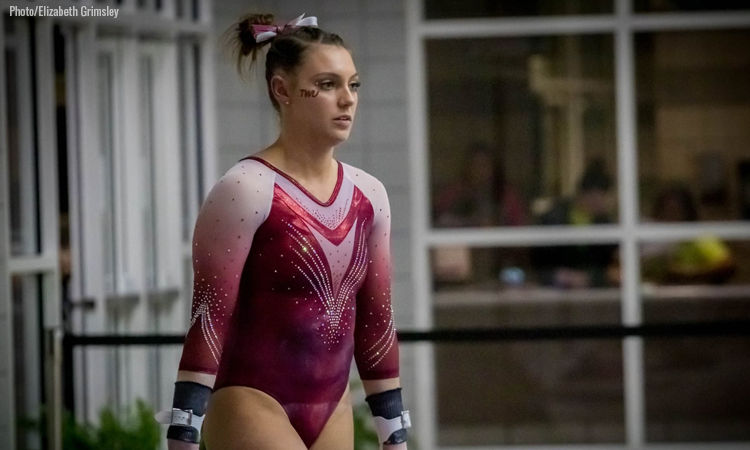 We were hoping for some ranking changes this week in USAG with three teams having double meet weekends, but despite our mild disappointment that the standings are in fact the same, we have plenty to be excited about. The leading pair, UIC and Lindenwood, both set season highs and UIC cracked the 196 mark for the first time of any USAG team in 2019. Southern Connecticut and Penn not only set season highs but actually recorded program records. With only two weeks of competition left until USAG seedings are set and at least one qualifying spot very much to play for, things are getting exciting.

The freshman has been a game changer for SCSU this year, and her 9.850 on beam this weekend tied the Owls’ program record. Her all around excellence also helped SCSU to beat its program records on both vault and the team total.

UIC senior Tomassini had never competed a scoring bars routine until this year, so watching her emerge as a valuable specialist in her senior season has been exciting. This weekend, she set a career high of 9.875 that allowed her to become the Illinois state champion.

Bridgeport’s Kistner produced this superb Yurchenko arabian at the Purple Knights’ final home meet on Sunday. The 9.900 she received is the best vault score in USAG this year.

The Big Storyline: Lindenwood pulled off an incredible upset of Division I Missouri at the State of Missouri meet—its second win over a top 25 team this year. It was a season high for the Lions, and though it came in short of UIC’s exciting 196, they’re more than capable of matching the mark. All around star and USAG No. 2 Courtney Mitchell set a new career high in the all around. SEMO matched its season highs in the team score and on vault, but it still hasn’t cracked 190 this year.

Implications: Lindenwood is up to No. 39 nationally and has a serious chance to make NCAA regionals with solid performances in the final two weekends before regionals. It’s a rare and special accomplishment for any Division II team.

Records: Mitchell’s 39.350 in the all around was the second highest AA score in Lindenwood history. Lindenwood set a season high of 49.075 on beam, as well as the team mark.

The Big Storyline: Texas Woman’s still hasn’t found its groove in 2019, but since the Pioneers are in a road score crunch, any kind of acceptable mark would have been enough to make a big difference since their drop score was only a 190. Their NQS will jump by over half a point this week, but they still have a long way to go if they want to contend with the top tier of USAG teams.

Implications: TWU will jump two spots to No. 54 nationally.

The Big Storyline: Yale had a great meet, coming in just short of its season high in Durham.

Implications: The Bulldogs added a little over two tenths to their NQS, but it wasn’t enough to make a difference in its ranking either in the country or in USAG, where it remains No. 4.

Records: Yale’s score was the second highest in 2019 and the fourth highest in program history for the Bulldogs.

Controversies: A Yale gymnast may have been injured during floor warm ups. The team chose not to comment when we reached out.

The Big Storyline: UIC broke Illinois’ 11-year win streak at the State of Illinois meet, snatching the win with a season-best number that also becomes the highest score of the USAG season. USAG’s No. 1 vaulter Kayla Baddeley picked up another title on her best event—though she’s also the No. 3 all arounder and her 39.275 is far from shabby.

Implications: UIC’s score is the highest overall and the first 196 of the USAG season. It lifts the standard for the field as a whole. Lindenwood and likely Bridgeport are capable of scoring 196-plus too, but UIC being the first to do it is significant.

Records: This meet was UIC’s highest team score since 2004.

The Big Storyline: West Chester was just OK at this quad meet, putting up a mark that isn’t high enough to factor into its NQS. Southern Connecticut’s was the fourth highest of the season.

Implications: West Chester remains at No. 8 despite the missed opportunity for a NQS-contributing score. Southern Connecticut had another meet later in the weekend.

The Big Storyline: Southern Connecticut had an incredible day in its second meet of the weekend, breaking the team and vault rotation program records. Freshman Hannah Stahlbrodt also tied the individual beam record with a 9.850. Brown had an acceptable meet that allowed it to make an incremental improvement to its NQS while Ivy League rival Penn set a program record of its own. The Quakers came in almost five tenths above their previous program record, a score set in 2004, and came close to cracking 49 on floor.

Implications: Brown wasn’t able to take advantage of an opportunity to pass West Chester and jump into national qualifying placement, but it did make an incremental improvement in its NQS and might make the leap next week. SCSU is unlikely to qualify, but it’s inching closer to Seattle Pacific and has a chance not to finish the season on the bottom of Division II for the first time since 2013.

The Big Storyline: Air Force’s Salamone picked up event titles on both of her two events while Seattle Pacific scored season highs on bars and beam on the way to its highest road score of 2019.

Implications: Both teams will remain at the same rankings, both in USAG and nationally. Air Force is now very close to threatening Yale for the No. 4 spot in USAG while Seattle Pacific needs to watch out as Southern Connecticut creeps closer.

The Big Storyline: Bridgeport registered a Division I win and came close to another in the weaker of its two meets this weekend. The Purple Knights registered a 49.000 on floor but struggled on beam where they were eventually forced to count a fall. Beam has been a sticking point for the Purple Knights this year. Centenary meanwhile opened the meet on beam, winning the event. The Ladies’ great day culminated in a season high by a margin of nearly a point.

Implications: Both teams had a second meet later this weekend.

The Big Storyline: Bridgeport recorded its fourth highest score of the year and its home high while Cornell had an inexplicable disaster on beam and was forced to count a 7.975. Junior Maya Reimers continues to lead Bridgeport, hitting her floor routine twice in a weekend after going back to her old composition with “only” one E pass. Freshman Julianna Roland continues to excel too—she’s now the No. 6 all arounder in USAG and the best in ECAC-II.

Implications: Bridgeport will gain one spot in the national rankings while Cornell loses one. Bridgeport keeps improving, but it has only gone 195-plus once this season and needs to do it again at least once in its last three meets before nationals if it wants to keep pressure on Lindenwood and UIC.

Controversies: Some of the most consequential gymnasts on Cornell’s roster were missing this week. We know that Malia Mackey is restricted by an elbow injury. Izzy Herczeg also did not compete, and Lyanda Dudley only performed on bars. We’re hoping that the Big Red was just testing depth—if that’s not the case, it could signal trouble in Ithaca.

The Big Storyline: Centenary fell just short of a consequential Division I upset at Temple on Sunday, and it recorded the second highest score of its season in the second part of its road double. The Ladies are putting together a spectacular season, not least due to the impact of senior Navia Jordan, who picked up a share of the beam title here.

READ THIS NEXT: The Dismount: Week 10 WAG