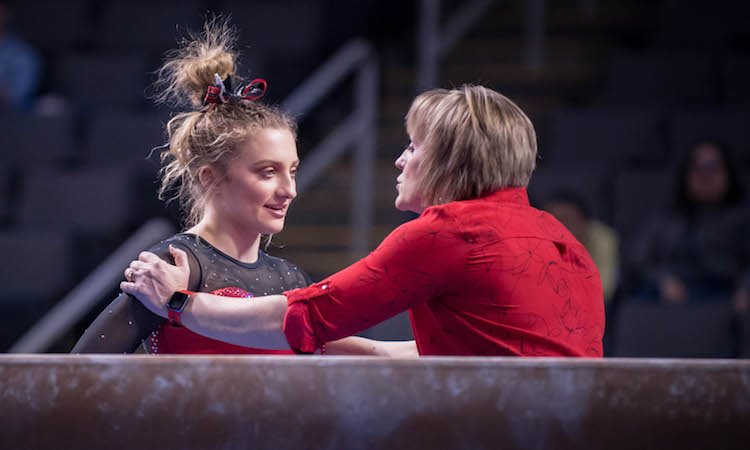 The Huskers have oscillated between brilliant and sluggish this season. To newly-named permanent head coach Heather Brink, the problem is confidence.

“We are more than capable of a mid-197,” she said after the team finished second with a 195.900 at Friday’s Elevate the Stage session. That mid-197 is the goal Brink sets for her squad week in and week out. Coming up short in Toledo was clearly frustrating to the team, which looked deflated after its fine-yet-not-stellar performance. Brink says they are struggling to put what they do in practice onto the competition floor.

The Huskers didn’t count a fall or have a single large error that led to the score though. “We just weren’t quite all there,” she said.

It isn’t surprising that Nebraska didn’t hit the ground running this year. Brink was elevated to acting, and then permanent, head coach after longtime leader Dan Kendig’s sudden retirement in October. The team also lost Olympian and assistant coach Chris Brooks, who is now an assistant for the Oklahoma men’s program.

Now, the team looks to Brink and new assistant Mike Heredia; the second assistant spot remains vacant. Brink says the early season has been “trial and error” since she and Heredia can only do so much without a third coach. Through it all, she has come out with great respect for her team. “The best thing that came from it is I feel like I had a team that didn’t create drama around the situation.”

Drama or not, the Huskers are running out of time to settle into their rhythm. The staff continues to rely on the senior class to help its many underclassmen find their footing. “They took the bull by the horns,” Brink said, and made sure the freshmen felt part of the team from the start.

One of Nebraska’s great accomplishments was putting up six 10.0 start value vaults against Minnesota on February 9. It was only the second program to do so after Oklahoma. According to Brink, the Huskers have been recruiting toward that goal for years. Now, the aim is to hit all six, since two of the February 9 vaults had falls.

Brink credits Heredia with coaching the team to the feat. She calls him a great technician, noting that the most important thing was “getting them to believe that they were capable of doing it. ”

Through the highs and lows, Lincoln native and Nebraska alumna Brink is happy to lead her alma mater since it’s what she knows. Now, with that mid-197 in mind, it’s just, “One day at a time. That’s what my screensaver says. ‘How do you eat an elephant? One bite at a time.'”