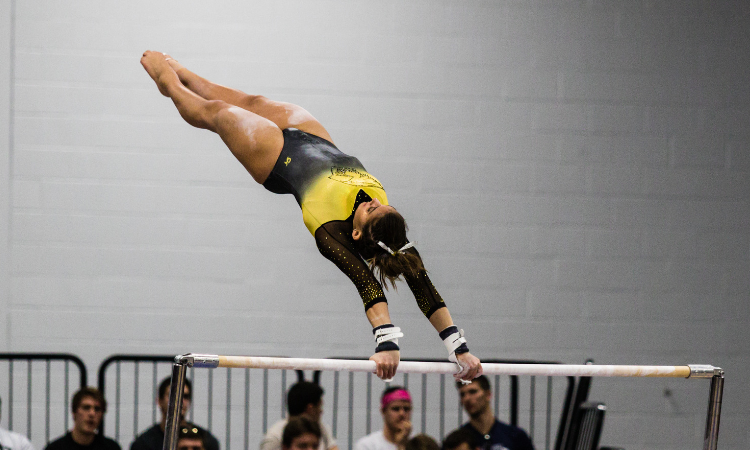 There were some big surprises in DIII this past weekend! A WIAC upset out in Seattle, a close finish between the Gusties and Blue Devils and more school records broken by Rhode Island College are just a few of the highlights. Improvements are continuing to be made as teams clamor to prove themselves as nationals contenders.

DiBiase hit a fantastic floor set this past weekend and scored a 9.675—the third highest floor score in program history. She ended up placing higher than multiple DII athletes, but more importantly played a big role in the team scoring a school record on floor.

Hammond has been a steady beam worker for the Titans all season, even managing to become their anchor on the event. But this weekend, she really showed her chops when she put up a beautiful, no-wobble set to finish second at a quad meet against DI Air Force, DII Seattle Pacific and reigning NCGA champ UW-Whitewater.

The Big Storyline: UW-Oshkosh upset reigning DIII champion UW-Whitewater to finish third in a quad meet against two other non-DIII institutions. The Titans started their night off on beam where they were rock solid and totaled a massive 48.275—a score that looks like it could be a school record based on the team statistics on their site; however, there hasn’t been confirmation. They continued the momentum through floor and vault and were poised to break 190.000 heading into bars, but some falls and form issues held them back from achieving that. Their 189.100 is still huge for them and ended up being the highest score posted by a WIAC team this weekend. UW-Whitewater looked confident in its first two rotations, scoring season highs on both floor and vault. However, the Warhawks had a rough bar rotation, putting them out of contention for third.

Implications: UW-Oshkosh wasn’t able to put up a score quite high enough to take over the Warhawks in the national rankings but are only about a tenth behind.

Records: The Titans scored a school record on beam with a 48.275.

The Big Storyline: Rhode Island is shattering records left and right. For the second week in a row, the Anchorwomen broke their school bar record. Additionally, they scored a 47.300 on floor this weekend to break that event record as well. Senior Allie DiBiase led the pack on both of those events, but other major contributors include fellow senior Miranda Murphy, Christa Vaccaro and Grace Davis. Rhode Island is moving on up toward a season average of 180.000!

The Big Storyline: Unfortunately, Ursinus was not able to get the big score it got last week, but the Bears are still managing to have a fairly solid season despite all the odds stacked against them. This weekend, they were able to field a full lineup on both bars and beam, which paid off as they ended up scoring a season high on the former. Lindsay Rush was a standout, besting her DII competitors and placing third on vault. Haley DiCicco was the top performer for the Bears on bars and floor and also claimed the all around title.

The Big Storyline: Ithaca hit its third score over 189.000 for the third meet in a row and are encroaching on UW-Stout’s territory in the rankings, coming in at just over a tenth behind in season average scores. The Bombers had a great showing from many gymnasts, but in particular, Katie Holcomb was incredibly consistent this week, scoring a 9.750 on beam in both meets, which was good enough for a first place finish against DII SCSU and conference foe Springfield. Speaking of, Springfield had a much better showing this weekend after struggling a bit out in Colorado last week. Though there were still issues on bars, the beam team was spot on and totaled a school record. Tali Twomey was also on her game this week and finished first on floor.

Implications: With these big scores, Ithaca and Springfield have locked themselves in as No. 2 and No. 3 in the NCGA-East.

The Big Storyline: NCGA-East conference rivals Brockport and Cortland met up for Cortland’s third meet in a week. The Golden Eagles managed to hit 190.000 for the second time this season and remain the only NCGA team to have achieved that feat in 2019. Though Brockport won this dual convincingly, Cortland had some bright spots in its day with Emily Speciale and Megan Hanley claiming the top two spots on bars and Lindsay Riggs coming back from injury to compete floor for the first time this season.

Implications: Though Cortland was looking like it could sneak up on Springfield and take over the No. 3 spot in the NCGA-East, this score held the Red Dragons back a bit; they will remain No. 4.

The Big Storyline: Gustavus came within nearly a point of UW-Stout, which is the closest any WIAC team has come to taking down the Blue Devils this season. The Gusties should feel incredibly proud of their finish for not only that but because they scored a season high for the third week in a row and continue to show improvements as well. Sam Ardy and Amanda Malo continue to be big contributors, but Katy Trunk is also stepping up and scored the team’s top beam score and second highest floor score. The Blue Devils had some nerves come through in their beam rotation, which held them back from reaching the scores we have seen from them all season. However, considering this 185.800 is a score they will be able to drop, they are still in good shape rankings-wise.

Implications: Gustavus is mere tenths away from moving up to No. 7 in the WIAC.

The Big Storyline: Cortland scored a season high and claimed five individual titles against the Bombers. However, Ithaca still managed to come out on top thanks to some great routines from Carolyn Nichols who put up two top-two finishes, and Cassidy Marquette, Baylie Trammell and Victoria Gery who each claimed an individual title. Though this was a great meet for both teams, their meets later in the week carried a bit more weight as Ithaca met up with Springfield for a meet between the No. 2 and No. 3 teams on the east coast while Cortland took on friendly rival Brockport.

The Big Storyline: UW-La Crosse finally hit the meet we have come to expect from the Eagles and broke out of the mid-186.000 rut it has been in nearly all season thanks to season high scores on beam and floor. Though the Eagles swept at least the top three spots on every event, standout performers were once again Ally Blixt and Sam Weyker. Both continue to impress on their events, each claiming an individual title for themselves and tying with each other for the floor title. Last week’s surprise performer Breghan Kiloran also rose to the occasion, claiming the bar title for the second week in a row. The Warriors also had a fairly solid meet, scoring in the 183.000 range for the third time this season. Leah Messelt was a big contributor and scored the team’s top score on vault and beam as well as the second highest on floor. Like many other DIII teams this season, bars continues to be a struggle for them but they have been on the upswing (pun intended) the last two meets.

The Big Storyline: Look at how close this finish was! Heading into the fourth rotation, the Blugolds had a significant lead over the Pipers and looked like they would easily get the win. However, the Pipers put together their best rotation of the night on floor while UW-Eau Claire had some struggles on beam, turning this into quite the nail-biter. Ultimately, the Blugolds still ended up coming out on top and claimed three individual titles in the process. Ashley Benes, Hannah Lewis and Kiya Bjorge took the vault, bars and floor titles, respectively, while Hamline’s sole title came from Katie Kalland on beam.

The Big Storyline: UW-Eau Claire had another close finish on Tuesday night, finishing less than a point behind the Warriors. These teams were tied or within a tenth of each other on every event except for bars, where the Blugolds struggled a bit in the first rotation. These two teams have been very consistent the past few meets in terms of scoring, but they will both need to step up and make sure they are hitting four solid rotations if they want to be in the nationals discussion.

READ THIS NEXT: The Dismount: Week Seven WAG