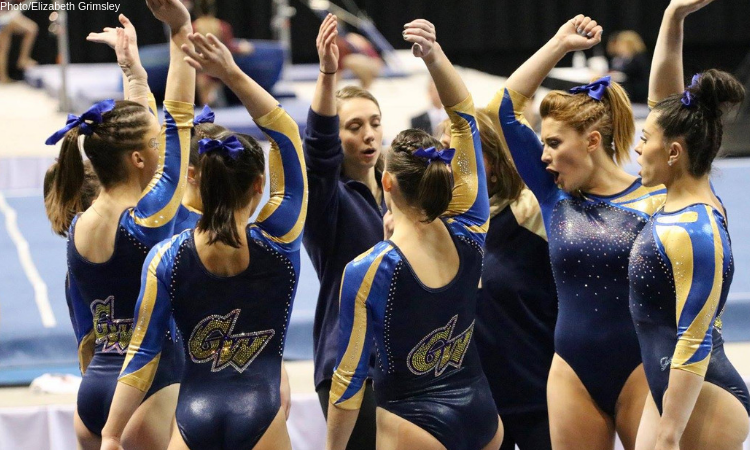 It’s Mary Emma again, coming to you live from the Fitzgerald Field House for what should be an exciting EAGL matchup! Both teams will be looking to improve on their performances here and move up in the rankings.

George Washington is coming off what was an unexpected week off due to a meet cancellation, so the team is going to be looking to get back on track. The Colonials had a rocky start to the season after losing over half of their postseason routines, so it may take them some time to find their new groove.

Pittsburgh started off with a great season opener, but some struggles on the road last week in New Hampshire set the team back a notch. Most notably, the Panthers were only able to put five up on bars, indicating a possible depth problem on that event. Reigning EAGL rookie of the year Haley Brechwald is presumably still working back from an off season surgery and has been limited to vault and beam so far.

Brechwald (Pitt) – nice y full with a small hop back

McLaughlin (GW) – falls on jaeger gets right back up and then sticks full in dismount to end. Great fight!

Bars scoring is definitely tight. GW didn’t even break 9.7 for routines that looked better than that. Granted, I don’t have the best angle, so probably because of missed handstands. Pitt had a great vault rotation!

Bochenek (Pitt) – little close on gienger but good on bail, and great dismount. Couldn’t tell if she stuck or not.

Vitoff (GW) – y half with a step forward. I think that may have been her first college routine? If so nice!

McLaughlin (GW) – nice y full with a bounce back

Good rotation for GW. Losing Chambliss really hurts this lineup (she’s out with an Achilles injury), but they showed a great fight! Pitt’s a little short on bars routines with only 5 competing, but all 5 hit, so yay! Pretty sure that will be their season high on bars.

Miller (Pitt) – good mixed series to start, and completely misses her feet on her series and falls, good on full turn, and nearly stuck dismount. Good fight after the fall.

Kaplan (GW) – little short on double like to open, good second pass, and s good rudi to finish. Good way to start off the rotation

Zois (GW) – huge double pike to open, 2.5 is great! and great finish. That should score well!

Crasa (GW) – good double pike to start. This music is fun. solid second pass, and great double back to finish. That should score well!

Great floor rotation from George Washington! They struggled a bit last time out, so nice to see that. Pitt put up a great fight hitting 5 straight after a fall from the leadoff!

Zois (GW) – Missed the begining, but look good so far, looks like she stuck (or nearly stuck) her dismount to end

Ceccarini (Pitt) – nice double back to open. And a string finish

I don’t have a very good view of either event, but I’ll try my best

Bochenek (Pitt) – rudi to open, leaps are great from what I could see, good double pike, I couldn’t see the last pass, but I think she went OOB? Nope, based on her score I think she stayed in.

Petrikis (Pitt) – hits double pike to start, I love this choreography! Front lay to front full is good. and great double back to close. Great routine!

Spivey (Pitt) – nice first pass! Little short on double back but saves it, and good rudi to close. Nice routine!!

Robatin (Pitt) exo – great double back to open, front lay to front full solid to end. Scored a 9.675 for that.

Herbine (Pitt) exo – I think she just added floor this year, which is great to see! Looked really short on double back, not sure if her hand went down or not, Really fun choreography, and hit last pass.

Season high for both teams! George Washington improved on their last performance, even without Chambliss, and Pitt had a good bounce back from its struggles last week.

I interviewed Head Coach Samantha Snider as well as senior Brittany West after the meet. Here’s what they had to say:

West on coming back from an injury and anchoring beam: “It feels really great to be back with the team and competing again. I embrace the pressure, so I love being the anchor and having my teammates’ back.”

Snider on the team’s improvement this week: “We definitely improved from the first home meet and obviously from last weekend, and that’s what we want to do. We want to keep seeing improvement week to week. And we showed a lot of mental toughness, a lot of grit and determination tonight.

Snider on how she kept the team focused after a leadoff fall on beam: “We tell the team to have a short term memory… you forget about [the mistake] and you focus on what’s coming up next. They did a really great job of that, and I know that was something they wanted to work on from last week, having to count a fall on that event.“

Snider on the Autism Awareness meet theme and where the inspiration came from: “[Dave [Kuzara’s] friend’s son has autism, so it’s kind of something that really hits home for him and it was important to him. So, when he brought it to our attention, we jumped on board with that idea of raising awareness. We found that with autism, almost everybody is affected by it and touched by it in some way.”