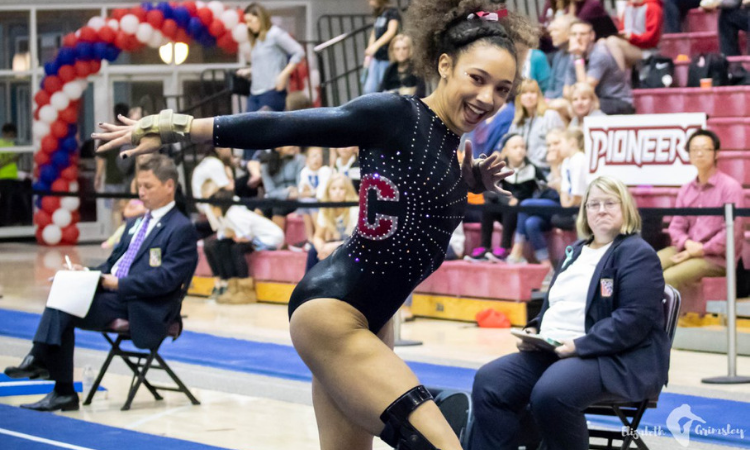 UW-Eau Claire and Centenary opened the 2019 season with scores in the 181.000 range and one event that caused them some trouble. This should be a fierce competition with both teams hoping to put last weekend behind them and show they can be consistent all around.

Not only should this be a tight race team-wise, but we could also see a close competition when it comes to individual titles. UW-Eau Claire’s lone title last weekend came from senior Kiya Bjorge on floor—an event where Centenary’s Navia Jordan is a standout performer. Watch for a close finish between these two.

Gymnasts have marched in and are starting their touch! The feed following UW-Eau Claire doesn’t seem to be working yet, so I’ll do my best to catch them in the background.

Jackson (CC) – Nice Yurchenko layout, just a bit pikey and a small hop on the landing

Dame (UWEC) – Foot slips off on her toe-shoot, gets back up and does a beautiful blind to pak! Let’s go a bit early on the double tuck and has to put her hands down.

Jordan (EXH – CC) – Huge hand front!! A step to the side on the landing but really nice overall!

Lewis (UWEC) – Clean blind + Jaeger + bail, blind full + double tuck is great with just a tiny step on the landing! Lovely set for the Blugolds to close out the rotation.

The struggle is REAL with this stream. The feed for UW-Eau Claire never ended up working, so they are attempting to go back and forth between the two events.

Anyways, from what I caught both teams had fairly solid rotations. UWEC improved its bar score by over a point but still had some areas for improvement in the middle of the lineup. Centenary also upped its game this week scoring .750 higher than last weekend.

Knaps (CC) – Blind half + blind full + bail is clean, nice blind to double tuck with a hop and step on the landing

Jackson (CC) – Opens with a Ray but looks like she clipped her heels, some leg issues on the bail, open double pike with small hop forward to finish

Baumgartner (CC) – Shaposh catch is a bit wonky followed by a close catch on the pak and has to do an extra glide, finishes with a blind to double tuck… chest pretty low

Sanders (CC) – Nice free-hip + Gienger, not quite handstand on the bail but finishes with a beautiful blind full to double tuck STUCK!

Smith (CC) – Shaposh is good, GREAT free-hip + pak combo and a gorgeous double layout to finish! Almost got the stick but took just the tiniest of hops… Really nice set!

Ponder (CC) – Blind full to MASSIVE tkachev, just a little to far out and peels. Re-mounts and does a great bail to handstand followed by a double layout with a hop forward. WOW, that will be a stunning set when she hits!!

Okay, we didn’t get to see any UWEC that rotation but based on scores the Blugolds had an excellent rotation led by Ashley Benes’ 9.575 for her hand front. Centenary had a few struggles on bars, but overall the Ladies were much improved over last week. Tavia Smith’s set was a standout—beautiful and difficult.

Sanders (CC) – Slight check on her turn and BHS LOSO series, switch + tuck full + beat jump is pretty and unique, another check on standing LOSO, RO 1/1 with small step to the side… looked a bit nervous and hesitant throughout

Harris (CC) – BHS LOSO is rock solid, switch half with a small bobble, front toss is super steady, front full dismount with just a tiny hop! Loved this set! Really precise in her dance and confident on all the big skills.

Smith (CC) – Switch + straddle 1/4 is lovely, front toss + BHS swing down…not sure if it was connected, fall on a pike jump + beat + 3/4, gainer full with a step to finish. The extension on all her skills was simply gorgeous, just a few small potential connection issues in the series and jump combination

Still no UWEC… However, that’s okay because Centenary put on a show over on beam—I think I’m the Ladies newest fan! From unique connections to lovely choreography, this group has it all. The attention to detail can be seen all the way through the tips of their fingers… I’m obsessed.

Sander (CC) – Front lay + front full controlled well, RO + whip half + front full is also nice. Played to crowd the whole time and looked genuinely happy to be out there. Love that!

Smith (CC) – Fantastic RO + BHS + double pike, switch ring + switch side is lovely, almostttt goes out on the front full + front lay but holds on, RO + whip (?) + 3/2 is controlled but the whip looked like it was more of a layout

Soooo, this didn’t quite end up as close as it was looking like it could after three rotations. Centenary distanced itself after putting up an incredible floor lineup, while some struggles on beam caused the Blugolds to drop behind.

However, both teams should feel great about the improvements they made tonight! UWEC scored almost five points higher than last week and Centenary improved by a whopping six and a half points.

READ THIS NEXT: The DIIISMOUNT: Week Two