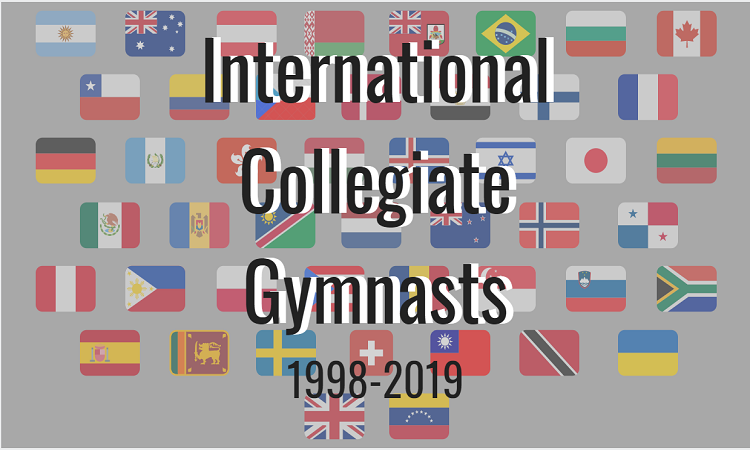 For the women, UCLA leads the way, with 22 international gymnasts on rosters; UIC and Eastern Michigan come in second with 18 each. UCLA also tops the charts for non-Canadian internationals, tied with Towson at eight.

Penn State and Nebraska come out on top for the men with 18 and nine international gymnasts, respectively. Nine of Penn State’s internationals have been from countries other than Canada; SC United is in second place, having counted five non-Canadian internationals.

It’s not just the big programs who land international recruits: 12 women’s Division II and III teams have had at least one, as well as four men’s club and GymACT teams.

In 2018, there were 88 non-American male and female gymnasts on rosters. They represented Australia, Canada, Colombia, France, Germany, Japan, Mexico, Moldova, the Netherlands, New Zealand, Panama, Peru, the Philippines, Slovenia, Spain, Sri Lanka, Sweden and the United Kingdom. The total in 2019 comes to 81 and adds the Czech Republic, Iceland and Taiwan to the list.

Explore the data with the interactive infographic below.

A note on methodology: We counted women going back to 1998 and men going back as far as institutional rosters are available, but at least to 2012. Defunct programs are included where data was available. Each gymnast is counted once, regardless of how many years that gymnast was on the roster. We tallied gymnasts by the hometown listed on rosters; gymnasts who are from the United States but compete internationally for another nation (ex. Kylie Dickson, who competed for Belarus) were not included. International gymnasts who have represented multiple nations are listed under the nation on their roster (ex. Danusia Francis is counted under the United Kingdom, not Jamaica). Though it is a territory of the United States, for the purpose of this exercise, we considered Puerto Rico to be international. All data from Road to Nationals and team rosters. At the time of writing, Bridgeport, Cortland, Wisconsin-Eau Claire, NorCal United and the William & Mary men had not yet released 2019 rosters.

READ THIS NEXT: ALYONA SHCHENNIKOVA STILL PLANS TO COMPETE FOR MICHIGAN

Article and infographic by Emily Minehart