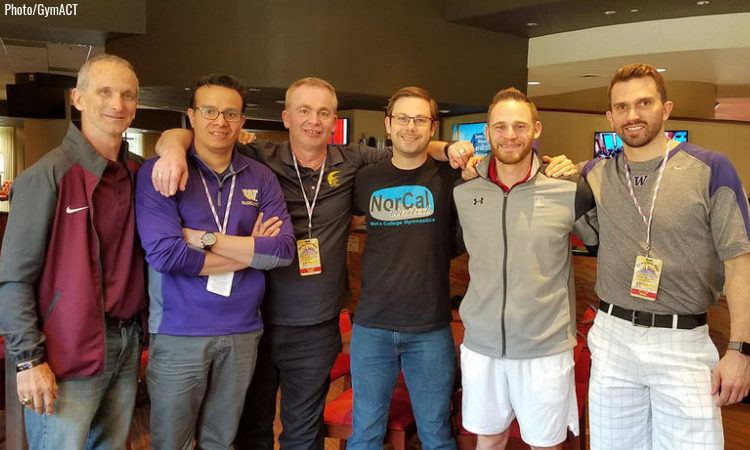 The Gymnastics Association of College Teams, more commonly referred to as GymACT, aims to be the solution to that problem.

GymACT, officially formed in January of 2018, is a league of collegiate gymnastics teams that are unaffiliated with the NCAA and not funded by schools yet strive to compete at the same level as the NCAA programs. Led by president Scott Barclay, head coach at Arizona State, GymACT is hoping to give young gymnasts more opportunities to compete at a high level after competing at the J.O. or high school level, in turn helping grow the sport once again.

“Gymnasts are unique athletes, and there are limited opportunities across the nation for high school gymnasts to continue developing their skills and teamwork. That is sad,” Washington head coach Giancarlo Mora said. “We [GymACT] are here to increase that high competitive team opportunity. We want to foster the growth of men’s college gymnastics programs.”

Although officially GymACT is only soon approaching its first birthday, the story of the organization spans multiple decades, beginning with the decades long and still continuing exodus of many men’s programs from the NCAA.

In 1993, the ASU men’s gymnastics team was cut from the athletics department. This left the team in a peculiar position with the talent and drive to compete with NCAA programs but no longer the financial support from the university or the ability to compete at the NCAA championships.

Barclay took over as head coach the next year and led the newly founded “club” team to a USA Collegiate Club National Championship team title in the spring of 1994. Over the next few years, it became apparent that there were several club programs dedicated to competing at a higher level than the traditional club teams who are without dedicated head coaches, regimined practice schedules or consistent competitions.

“Probably 20 years ago I started pulling our collegiate coaches together,” Barclay said. “We’d get together and just talk about our common needs and goals and how we’re handling it, raising money and recruiting.”

At the time, only ASU and Washington, who’s program was cut from its athletics department in 1980, were considered to be in this upper-echelon of club programs. The talks amongst the coaches continued, and their programs began to grow and dominate at the club level, attracting attention from other like-minded coaches.

In 2014, when the Temple men’s gymnastics team was cut from its athletics department, it too continued to try and maintain the competitiveness of NCAA level programs, mimicking the likes of ASU and Washington. With three club teams now committed to maintaining a high level of gymnastics, forming an official organization took another step toward becoming a reality.

The yearly talks amongst the club coaches weren’t only about building and maintaining their programs but also growing the sport as a whole. They’ve succeeded in doing such with the creation of three new teams in just the past four years.

SC United (formed in 2015), NorCal United (formed in 2018) and NY Alliance (who will compete for the first time in 2019) are unique in that they are not affiliated with any specific school but allow for gymnasts enrolled in schools in the area to continue their gymnastics careers.

Those three schools, alongside Temple, ASU and Washington, are the current members of GymACT. Struggling to find footing above the traditional club level but unable to compete at the NCAA championships, GymACT can now serve as a home for teams trying to shed the “club team” label and the stigma that comes with it.

“It’s a huge perception issue. One of the terms we’re trying to get away from is the term ‘club.’” John Lucas, NorCal United head coach, said. “They hear club, and they think it’s this lower, lesser thing that’s not going to help me get where I need to in gymnastics. But Arizona State, Washington, SC United have kids at the qualifier to championships. We’re providing those same opportunities to compete at U.S. Championships and run a full college season.”

“Gymnastics is broken down into three tiers right now,” Temple head coach Jesse Kitzen-Abelson said. “Tier one is NCAA varsity status, tier three is the NAIGC (National Association of Intercollegiate Gymnastics Clubs) club level—recreational and fun—and the middle is the hybrid. [GymACT] is the competitiveness and inclusiveness put together.”

GymACT teams compete under NCAA rules and against NCAA programs on a regular basis, frequently beating them as well. Barclay explained that GymACT is not trying to be a replacement for the NCAA but rather works alongside it, as well as the CGA, to help add structure and a better level of competition to non-NCAA programs.

For example, the GymACT member teams’ championship meet is held annually by USA Gymnastics. With decertification looming, the USAG Men’s Collegiate Championship meet is in jeopardy. Thankfully, Barclay said if the meet were to come to an end, GymACT would be able to step in and hold a championship meet in its place, adding structure, competition and a sense of security to these programs.

Despite being competitors on the floor, the coaches of GymACT know it’s in the best interest of the sport if they help and support one another. In addition to talking about how to survive financially and the struggle of recruiting athletes to their programs, during the monthly GymACT conference calls, member coaches often speak about how to increase their level of competition and help grow the sport.

“It’s hard to compete against yourself,” Barclay said.

With men’s NCAA programs being cut by athletics departments often, this is not an easy task. While it certainly does not want to see more programs lose support from their schools, GymACT wants to be the place these programs can come to if it does occur.

While the addition of these teams is great, growth of men’s gymnastics won’t happen without the help of the public as well. Donations and attending meets are both good ways to support the initiative, but spreading the word about GymACT is the biggest way in which the organization can earn a good reputation.

“Letting kids know it’s not a second chance opportunity,” said Mora. “We are as competitive as any team out there.”

Visit the GymACT website for more information, to donate and to learn more about the member teams.

READ THIS NEXT: The Fight for UIC Gymnastics and How You Can Help