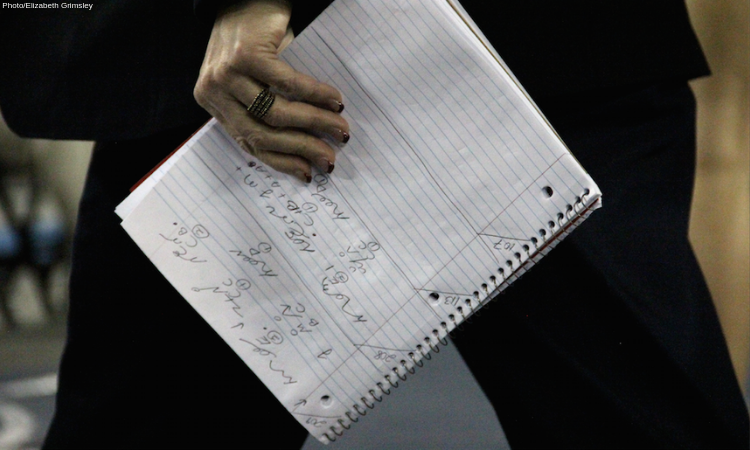 Scoring strictness in NCAA fluctuates over time, and it’s undeniable that since around 2014 we’ve been in a particularly lax era for execution. Some deductions seem like they’re never taken in NCAA, and while it’s fun to see perfect 10s flying, it can be frustrating when routines with obvious errors are ranked equally with visibly cleaner ones. We’ve picked 10 execution errors that we frequently see in routines that score 9.950 to 10.000 that we wish we’d see deducted more frequently.

Please note that while we have chosen GIFs to illustrate these deductions, we don’t intend to pick on these gymnasts specifically! These are all common issues in NCAA competition.

A two foot layout is a hard skill to do correctly—there’s a reason in elite competition the majority aren’t fully credited. Several notable NCAA gymnasts have competed a version of this skill that is credited as a back pike but that is technically closer to a whip back, which is a smart way to reduce deductions. Piking can also be an issue on double layouts on floor and occasionally bars—while it’s acceptable to perform any layout skill in a hollow position, the term “hollow” describes an upper body position and does not excuse a closed hip angle.

Bent Legs on Back Handsprings

Many NCAA gymnasts have a little of this, but there are egregious cases that still reliably get top scores. It’s also something that can vary from routine to routine for a specific athlete—so why not deduct more consistently for it and motivate top beam gymnasts to prioritize it?

There are a wide range of “almost stuck” landings in gymnastics, and it can be challenging for judges to decide what to do with them. That said, it should be obvious that a vault with an obvious bounce shouldn’t be given a 10, even if the gymnast’s toes stay planted.

There are several technical deductions on bars that frequently aren’t taken because they’re difficult to spot from a side angle. That said, it’s not impossible, especially if they pay attention to which gymnasts are frequent offenders.

This is a ubiquitous issue across all levels of gymnastics, but it’s perhaps overlooked most frequently at the NCAA level. It pops up anywhere gymnasts do tuck and pike positions, but double backs on floor and full-twisting double back bars dismounts are perhaps the most common.

Bent Arms and Leg Form on Back Handsprings

This is a hard one to spot because it happens so fast and because many gymnasts are still able to generate tremendous power out of a poor back handspring, but that doesn’t mean judges shouldn’t look out for it.

Landing With Chest Down

Underrotation is easy to spot when a gymnast is forced to take a step forward out of back tumbling or when they visibly rebound, but some are talented at covering habitually poor landings. While it’s a good skill to have, it shouldn’t prevent the deduction from being taken.

This one is perhaps less common, but the gymnasts who do struggle with it do so consistently, so it shouldn’t be difficult to identify and deduct for. This issue can also show up with the trailing leg on aerials.

Twisting Onto the Table

This is a common flaw of Yurchenko vaults, especially more difficult ones. A gymnast’s shoulders should be open and square to the table until their hands are no longer in contact with it, and deductions should be taken on vaults that start twisting prematurely.

We see this error most often on bars dismounts, but it can pop on floor from time to time. Like Shaposhnikova errors, it can be a little hard to spot from the side, but it’s far from impossible and shouldn’t be overlooked.

READ THIS NEXT: 11 Gymnastics Terms You Should Stop Misspelling